Artist Douglas Coupland's new exhibition, Rabbit Lane, is inspired by his 1998 novel, Girlfriend in a Coma, set in West Vancouver.

Douglas Coupland published Girlfriend in a Coma in 1998, a fictional novel that centres a group of friends in West Vancouver. Revisiting the writings, the West Van artist worked with the West Vancouver Art Museum to create a series of photographs inspired by his book.

Set in the Rabbit Lane neighbourhood, a real place in West Vancouver, Coupland's original novel centres around Karen McNeil, who falls into a coma that lasts 17 years. When she awakens, the friends come together once again to face an impending apocalypse.

Describing the Rabbit Lane neighbourhood, Coupland said it is an area that time forgot.

“Because of historical reasons, it's sandwiched between a big empty golf course and forest. It's kind of down a hill and it's as quiet as a tomb,” he said. “And everyone sort of notices. I kind of wonder if something else [was] going on there in the distant past, but there's some sort of charged element about it.” 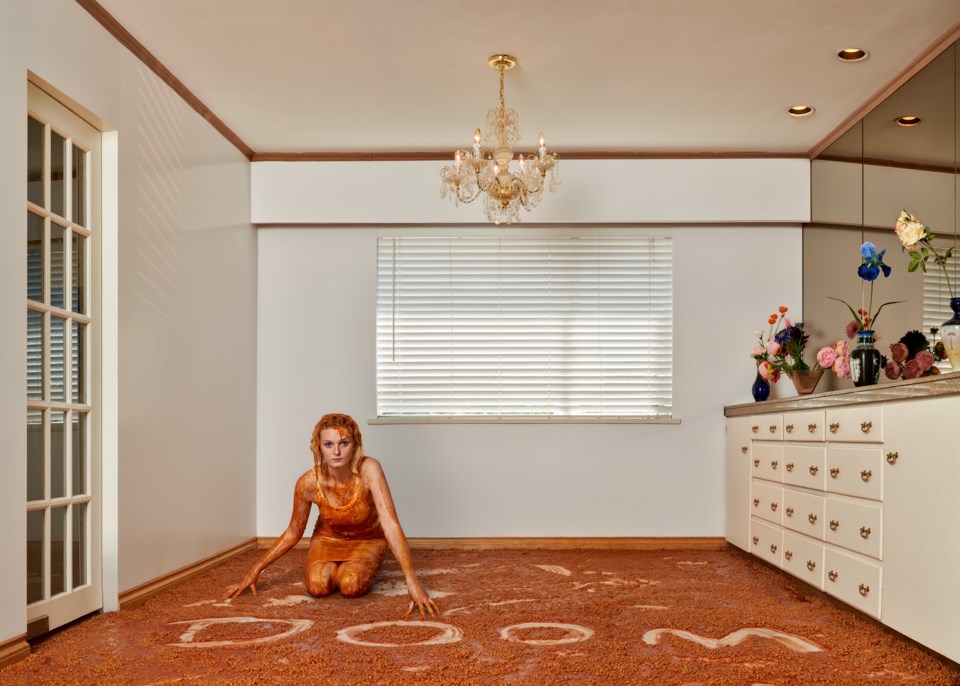 Meeting with the North Shore News prior to the exhibition opening, Coupland said the real stars of the photographs are the houses.

“It’s a form of architecture that never gets mentioned, noted, or celebrated, yet it's basically what 99 per cent of us grew up in, and they're all vanishing very quickly right now,” he said, noting the ranch-style homes so common on the North Shore.

Coupland said back when West Coast Style houses were constructed, they were often first homes for families and first mortgages with their three or four kids.

“Everyone's parents were just scraping by. And there were just so many kids everywhere. I mean, that's what makes it so spooky up there now, because there are no people period, let alone kids,” he said.

His reason for centring his works around West Van, Coupland said, is because he is seeing something vanishing that “never had its moment in the sun.”

“Growing up here, we really thought, knew, and felt [we] were living in the middle of nowhere, or in a place that wasn't even really a place. And there's sort of a freedom that came from that,” he said.

West Vancouver Art Museum curator Hilary Letwin agreed with Coupland, and said Rabbit Lane is steeped in nostalgia, noting they had to go back to his original work written almost 25 years ago.

“We worked together to pick the scenes that we wanted to recreate, because we knew that we were never going to do photos that matched the narrative exactly, because that would have been challenging,” she said.

Wanting to keep the exhibit appropriate for all ages to enjoy, Letwin said they picked the scenes that were still able to give an “underlying ominous quality that definitely exists in the book” without the gore that’s found in the end of the original book.

“And really, the book more than anything else is about human relationships. For the first two thirds of the book, it's about how these friends and their friendships are built and what they're built on, and how they continue to grow together,” she said.

As the work called for heavy involvement from the North Shore community for crowd sourcing, Letwin said she was initially skeptical that people would want to volunteer.

“Sure enough, as soon as the article [about crowd sourcing] went up, people were emailing immediately to say, ‘I really want to get involved.’ And, ‘I grew up in North Van,’ or ‘I grew up in West Van and this book was the most important book to me.’ So everything that you see in the photos is basically borrowed from somebody,” she said.

It’s not the first time Coupland has crowd sourced; this latest work comes after a long line of Coupland projects that included public involvement, which Letwin described as a “leitmotif” in his work.

Letwin noted that a few West Van volunteers feature in more than one of the works in Rabbit Lane, something that Coupland described as purposeful.

“For 32 years now, I always deliberately under describe characters. … I consciously keep any sort of physical descriptors out, because that way, it just means everyone can imagine themselves being that character,” he said.

Rabbit Lane runs until May 28 at the West Vancouver Arts Museum, 680 17th St., adjacent to the District of West Vancouver municipal hall. More information can be found here.