Council deeply divided on controversial issue in the picturesque seaside village
Jun 1, 2021 10:05 AM By: Brent Richter 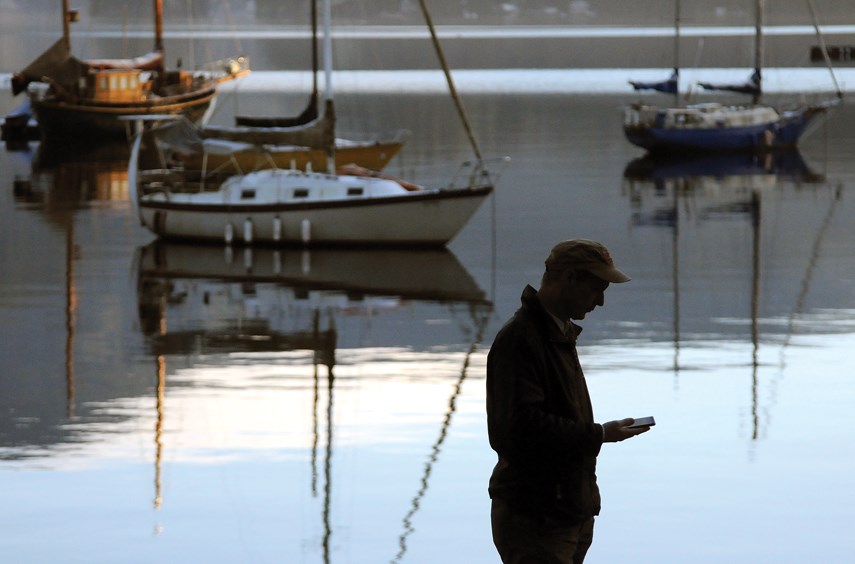 Grant Drummond, an advocate for live-aboards, stands next to Deep Cove, Jan. 16, 2019. Council may soon ban people from living on boats or mooring in the cove for more than 72 hours. Mike Wakefield, North Shore News files

District of North Vancouver council has taken a major step toward banning people from living aboard boats moored in Deep Cove – a controversial issue in the picturesque seaside village for years.

Council voted Monday night to sign a waterlot licence agreement with Vancouver Fraser Port Authority, giving the municipality jurisdiction over the water. The motion passed by a margin of 5-2 but the debate exposed philosophical and practical divisions on council as deep as the cove itself.

The language of the five-year agreement specifies that the district will not permit live-aboards or allow anyone to stay for longer than 72 hours. Anyone wanting to tie up to one of four district-owned anchor buoys will be required to register online for a permit in advance at a cost of $1 per foot of vessel length per day (up to 40 feet).

Anyone caught violating the new rules would be subject to a $300 fine.

Currently, there is no authority for the municipality to stop anyone from mooring for any length of time. But, with floaties and other unmentionable waste brushing up on local kayaks and paddle boards, residents and business owners in the Cove have accused boat dwellers of spoiling the atmosphere and spoiling the water.

“The issue around pollution within the Cove was always top of mind,” said Coun. Lisa Muri. “It's been referred to as a toilet bowl over the years because we've had so many cases of the E. coli shutting down the beaches, and over the years we've had a number of boaters come in and stay, in my opinion, too long.”

As of this week, there are about 16 boats moored in the cove, although only one or two of them actually have full-time residents, according to district CAO Dave Stewart.

Mayor Mike Little said he was assured it was the right course for district council after speaking with Port Moody’s mayor who was sceptical of such agreements until his council signed one.

“A year later, he says it's been fantastic and very well received in the community, and supported,” he said.

Coun. Jim Hanson voted against the agreement, saying it was ultimately outside of municipal jurisdiction.

“Which I believe can, at the end of the day, only complicate the mandate of the District of North Vancouver, without providing us the benefit to justify it. There's going to be costs involved. There's going to be staff resources involved. Ultimately, tidal waters are not the concern of the district,” he said, “And there's broadly an equity issue because for the people that are living in these boats … it's likely not their preferred form of housing. It's a form of housing they’re being forced into because of economic circumstances.”

As a Deep Cove resident and business owner, Coun. Megan Curren said she fully supports measures to protect the environment but she added her conscience would not allow her to vote on a bylaw that may displace anyone.

“I think in the spirit of No One Left Behind, we need to make sure that we're not leaving anyone behind,” she said. “I would like to find a solution that doesn't potentially cause harm to anyone that is part of our community now.”

Coun. Jordan Back said he too found the ban on live-aboards “heavy handed.”

For Coun. Betty Forbes, it was a matter of public health and giving constituents what they want.

“I know that Deep Cove people have wanted this for a long, long time. And to sound like a real grumpy person, the Cove people pay taxes and they're entitled to ask for things. We owe it to people who don't have housing to find it, but not at the expense of people that pay for that recreational area,” she said.

Coun. Mathew Bond retorted that a recent study from Metro Vancouver attributed most E. coli blooms at local beaches to runoff from the creeks when there’s a long dry period followed by heavy rains – not boaters dumping sewage in the water.

“The health concerns, I think, are misplaced and being blamed on one or two boats, unfairly,” he said. “If it's only two or three or four people, then just let them be.”

Seeing the vote headed for a 4-3 loss, Stewart warned that any attempt to renegotiate the terms of the contract with the port, which has been in the works since 2018, could scuttle the entire agreement. And any delay by council could put off enforcement by another year, he warned.

The vote passed with only Hanson and Curren opposed.

Stewart said district staff will start work immediately to accommodate the remaining live-aboard residents or persuade them to move on before the waterlot licence agreement comes back for a final vote.