A long stalled development on the City of North Vancouver waterfront appears to be moving forward. But first, a pair of eagles nesting near the site will have to go.
Aug 4, 2020 3:08 PM By: Brent Richter 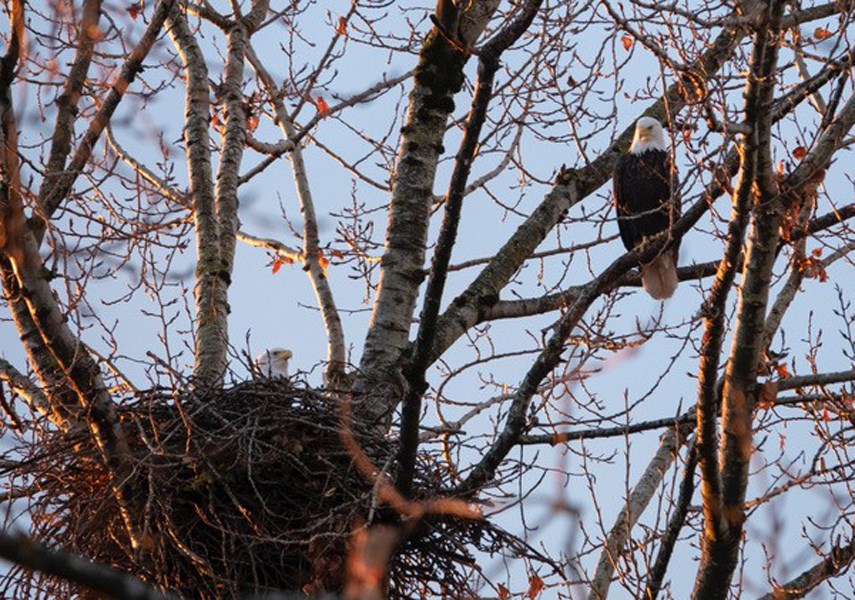 A long stalled development on the City of North Vancouver waterfront appears to be moving forward. But first, a pair of eagles nesting near the site will have to go.

Concert Properties, which successfully rezoned Harbourside for condos and commercial development in 2014, announced last week plans to remove the tree at the eastern edge of the site along with details of their mitigation plan.

The plan, which was put together with the City of North Vancouver, the province, the Squamish Nation, the North Shore Eagle Network and Hancock Wildlife Foundation, will see a new interim nest built in a treed area adjacent to the city’s works yard on Mosquito Creek.

Eagle biologist David Hancock said he’s confident the breeding pair will take over the nest for the next three years while construction work is done on the waterfront. The plan then is to install a new nest on a pole at the mouth of Mosquito Creek.

“The big buildings adjacent to them will be finished and the eagles won’t mind moving over to their pole nest on the water. In fact, I think they’ll love it,” he said.

In 2013, Hancock was called in to do a last-minute mitigation plan for an eagles’ nest on East Esplanade, which was being removed for the Vancouver Fraser Port Authority’s Low Level Road Project. The port paid for a new artificial nest to be erected just east of Seaspan’s drydock but, unbeknownst to everyone involved, the eagles had already begun settling into a new nest at a nearby park. The artificial nest remains vacant.

Since then, Hancock has been able to persuade dozens of eagles to transition to new nests when their old ones are removed. The key, he said, is timing. If the eagles see their old nest being cut down, they’ll immediately get to work on a new one.

“In every case that we’ve built them with the right timing, they’ve immediately gone to our nest and occupied it and built it up. Every single case, 100 per cent, so we’re quite confident,” he said.

Hancock said they must wait until two weeks after the pair have left on their northern migration, which could happen any time now. Every year, at the end of the breeding season, mature eagles fly north to feed on spawning salmon and to give their young a lesson in tough love.

“Eagles have done something that humans have failed totally to learn. ... They have learned how to get rid of their God damn kids,” Hancock said with a laugh. “They say ‘You know how to fly, you’ll figure out how to catch dinner and we’re gone.’”

When the North Vancouver eagles return and find their tree gone, they’ll scour the area and find the artificial nest waiting for them next to the works yard, Hancock predicted.

When Hancock did his first survey of eagles’ nests in 1954, U.S. authorities were paying a $2 bounty for every pair of eagle legs turned in. There were only three confirmed nesting pairs in the Lower Mainland and Fraser Valley at that time, he said.

“I’ve now got 557 nests in the Lower Mainland. That’s an incredible lot. It’s probably more in density than any other place in the world,” he said. “They’ve done quite well since people had a little more respect for eagles.”

Hancock said he could have the artificial nest on the port’s land – the one he built in 2013 that now sits empty – ready for eagles to inhabit again, but it would require a donor to come forward with a scissor lift for the day, allowing them to bring bundles of nesting material up.

“Now, we need to just build that up and then I’m sure we’ll get eagles to nest there,” he said.