A pair of eagles demovicted from their North Vancouver waterfront home have returned and found suitable housing in the neighbourhood, thanks to a bit of help.
Oct 29, 2020 2:30 PM By: Brent Richter 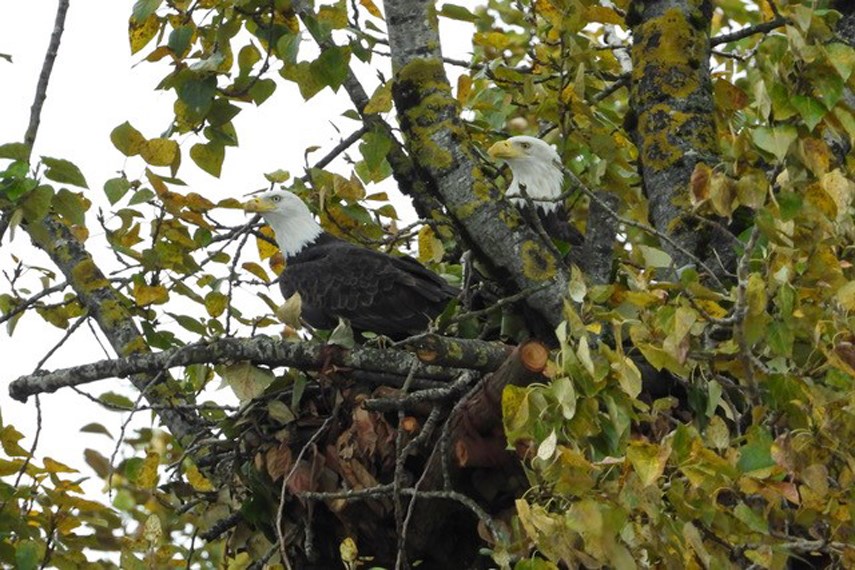 A pair of eagles demovicted from their North Vancouver waterfront home have returned and found suitable housing in the neighbourhood, thanks to a bit of help.

In August, Concert Properties informed the community they would have to remove a tree with an active eagles’ nest next to the Spirit Trail to make room for the first phase of their Harbourside development.

The province agreed to the developer’s request on the condition they follow and pay for a mitigation plan put together with City of North Vancouver, the Squamish Nation, the North Shore Eagle Network and eagle expert David Hancock of the Hancock Wildlife Foundation.

The plan consisted of putting up a temporary artificial nest in a tree in the City of North Vancouver’s works yard, about 480 metres to the north.

The eagles are now back and have wasted no time moving in and working on some home improvement projects, said Sally McDermott, co-ordinator for the North Shore Eagle Network.

“More or less, they’re having fun with sticks. They're doing great. They are really taking to the nest. That’s always a bit of a concern, but David Hancock was very confident in the tree that we chose,” she said. “He called it right on.”

When it comes to moving an eagles’ nest, timing is critical. At the end of the summer, Lower Mainland eagles migrate north to feed and to let their maturing eaglets know it’s time to move out and start fetching dinner on their own. The pair had kept a home in the cottonwood tree for the last three years, so volunteers from the network knew roughly when they’d be leaving town.

On Oct. 1, the first one returned to the temporary nest. The other came back eight days later.

“They don't necessarily go to the same place together. And they come back at separate times,” McDermott said. “They have a separate vacation from each other after spending 12 to 14 weeks bringing up their young.”

After the completion of the first phase of Concert’s Harbourside project, three or four years from now, the plan is to transition the eagles to a new nest on an artificial pole planted closer to the waterfront, where they prefer to be for hunting.

“The plan is to put a camera in. It will be the first [eagle nest] camera we have on the North Shore, so anybody can watch too,” she said.