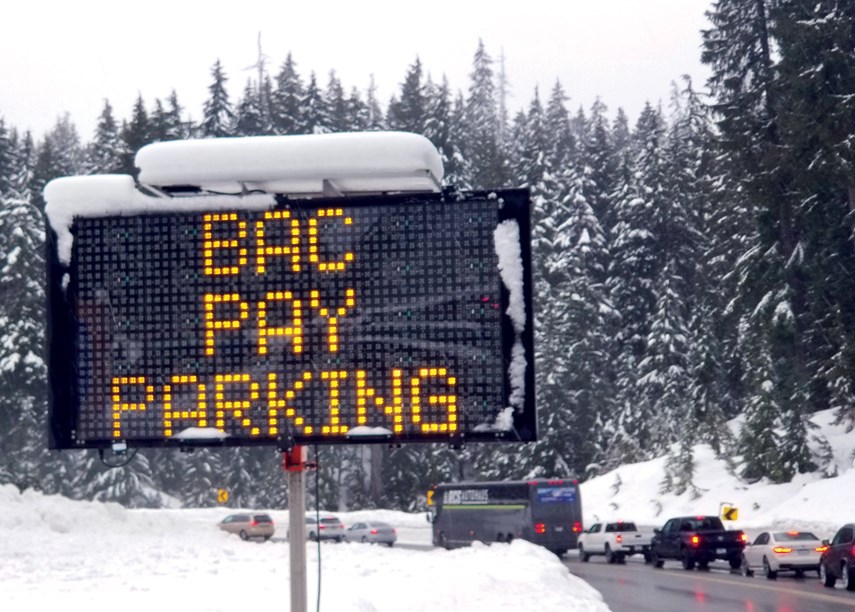 A digital sign board informs visitors to Hollyburn Mountain they will have to pay to park. Cypress Mountain introduced pay parking to curb demand.Steve Jones

Visitors to all but one of the parking lots on Hollyburn Mountain will now have to pay $10 to park, something Cypress Mountain Resort says is needed to manage unprecedented demand.

With people on Christmas vacation, bluebird days on the slopes and COVID-19 limiting options for recreation, accessing the upper reaches of Hollyburn Mountain and Mount Seymour has been exceedingly difficult with traffic backups stretching for kilometres.

Cypress Mountain Resort issued a release on Dec. 23, blaming the lineups on the province’s mismanagement of the provincial park the resort exists in. Anticipating a busy peak season, the two sides had been in discussions to bring back the day pass system the province introduced for Cypress and Seymour to manage provincial park crowds in the summer. But, by mid-December, the province had reneged on the agreement, according to the release.

“After explicit warnings were issued by Cypress Mountain Resort to BC Parks regarding the expected effects of uncontrolled visitation, no meaningful proactive action was taken,” Cypress president Russell Chamberlain said in the release.

As a result, Chamberlain said the resort has been forced to introduce pay parking in the Nordic Area Lot 4 and in Lots 1, 2, and 3A as well as adjacent roadsides in the downhill area to manage demand for limited spots. Lift ticket holders will not have to pay for parking and Lot 3B will remain free.

Under their existing agreement with the province, Cypress has the right to charge for parking between the beginning of November and the end of April. Money raised through parking will go to the resort to be spent on maintenance, Chamberlain said, which has otherwise only ever been subsidized by lift ticket and annual membership fees.

Visiting provincial parks would be a lot more enjoyable for everyone if the province addressed demand management themselves, Chamberlain added.

“In our view, we think that it's important for BC Parks to be responsible for the growing demand and visitation in provincial parks,” he said. “We think that a reservation system is a much more sensible plan.”

Parks advocate Steve Jones said pay parking in public parks is the wrong way to address what is usually only a short-term problem.

“The peak times are few and far between – sunny, midday during the holiday break,” he said. “I think it's quite inappropriate to bring in these policies that are going to make it a lot less convenient and affordable for families on the North Shore to visit these areas for the rest of the season when it’s not busy and when this isn't a problem.”

Rather than finding ways to manage demand, Jones said he would like to see the province free up supply. The easiest way to do that would be to allow trail users onto the trails as early as 6 a.m.

“A lot of people locally on the North Shore would get into the park, do their hike, do their snowshoe or backcountry ski, get back to their cars and be out of the parking lot before anyone arrives to use the resort,” he said. “They're forcing us to go into the park at the time when it's busier, which is absolutely ludicrous.”

And, park users have been waiting for more than 25 years for the province to complete a management plan and begin developing Pinecone Burke Park in Coquitlam, giving Lower Mainland trail lovers another option, Jones added.

Before attempting to drive up to Cypress and Seymour provincial parks, park users are advised by the ministry to check @Seymour_Park_PO and @Cypress_Park_PO Twitter accounts to see whether parking is available. When the lots are full, drivers will be turned back.

UPDATE: The Ministry of Environment and Climate Change Strategy sent the following response:

"This is an unprecedented year for BC Parks visitor numbers.  Mount Seymour and Cypress parks are experiencing a busy holiday season and there may be long delays, up to 2 hours to access these parks during peak times. Before heading to the park, people should check the resort websites, the park specific websites or Twitter accounts (@Cypress_Park_PO  and @Seymour_Park_PO) for up-to-date traffic and park access information. If the digital road signs indicate the parking lots are full, please plan to visit another time or find somewhere less crowded so you can have a safer, more enjoyable experience. BC Parks have additional staff on site to help manage traffic and provide education and compliance to ensure park visitors are safe and respecting the resort’s COVID-19 safety plan. The resort operators have traffic control plans in effect to manage traffic during peak periods. We are monitoring these parks closely during the holidays and making adjustments if necessary.  We are asking everyone to stay local and explore their own communities, which may mean choosing another activity if your favourite destination for winter recreation is too crowded."