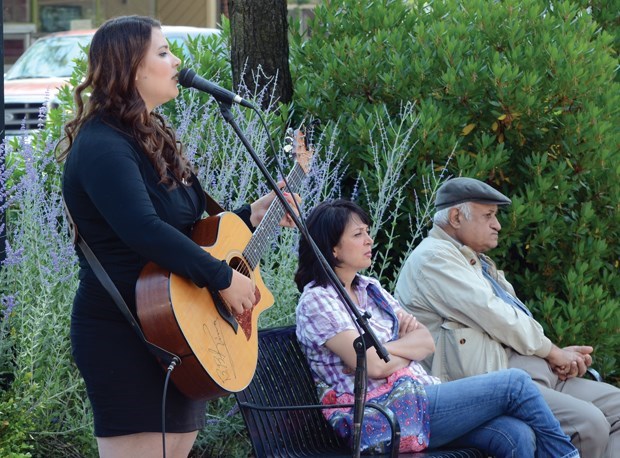 A busker’s attempt to have the City of North Vancouver’s noise bylaw struck down as an unconstitutional attack on freedom of expression has been tossed out in B.C. Supreme Court.

The decision is the latest in a legal battle going back to the summer of 2012 when city bylaw officers issued six tickets to Megan Regehr, more commonly known by her stage name Babe Coal, for using a mic and amplifier while she crooned and strummed for the public in the civic plaza.

Regehr fought the tickets in court, arguing the her mic and 10-watt amp were necessary to be heard over the street noise, and the prohibition on amplification in the noise bylaw was a violation of her right to freedom of expression guaranteed under the Charter of Rights and Freedoms.

In 2014, a B.C. Supreme Court judge tossed out Regehr’s tickets after concluding that the noise bylaw, as it’s written, does not apply to singing. The judge did not, however, address whether the bylaw itself was in violation of the Charter.

Regehr sued the city later that year, seeking $140,000 in compensation, alleging the city’s bylaw officers harassed her, misrepresented her in the media, trampled her freedom of expression and damaged her career. Another judge tossed out all of those claims, but did allow her to amend her suit to focus solely on the charter challenge, which she did in 2018.

The city’s application to have the lawsuit thrown out went to trial in Vancouver on Wednesday.

Regehr, who was represented in court by her agent, Mitch Barnes, argued the 2014 ruling only applied to singing, and not to the speaking or banter musicians are known to do between songs. The continued existence of the bylaw was still a trespass on her rights and those of anyone who performs in public, they argued.

“The reality is that the city does have an open door to ticket her, and they do have a legal ground or argument that they can stand on to do so,” Barnes said, adding that a ruling on the constitutional matter would set precedent for artists fighting tickets in other jurisdictions, including the constitutional challenge Regehr has brought against bylaw tickets she is fighting in the City of Vancouver. “There is no way of completely protecting her without protecting the whole.”

The city’s lawyer argued that the Charter restricts governments from limiting speech, rather than compelling them to provide assurances that rights will be respected. And that the city had not taken any actions against Regehr since the 2014 ruling.

B.C. Supreme Court  Justice Nigel Kent said it would be “absurd” for the city to allow her to sing amplified but not introduce songs in a speaking voice. That should have been understood from the original ruling, Kent said, noting the judge who made the 2014 ruling is a singer herself.

Ultimately, without further enforcement attempts by the city, Kent found Regher had no legal grievance with the bylaw and agreed to the city’s request to dismiss the lawsuit.

“She does not identify any conduct on the part of the city which amounts to denying her entitlement to resuming her public performances in that city. In short, she has no basis for complaint and certainly no basis for continuing the lawsuit,” he said,

Kent expressed frustration with both the city’s conduct and Regehr’s, saying a simple meeting between the two should have made it clear that she would not be ticketed again.

“If you had your clients sitting in the room here today, I'd be looking them in the eye, saying; ‘Why on Earth won't you speak to this person and just solve this problem?’ Because it sure doesn't seem like a massive problem to be worthy of wasting enormous amounts of time and money in court,” Kent told Melissa Santalucia, the city’s lawyer.

He had a similar message for Regehr and Barnes, telling them they’d already won their battle in 2014.

“Are people just not being a little silly here?” he said.

In closing, Kent ordered Regher to pay for the city’s legal costs.