Community urged to 'rescue the rescuer' 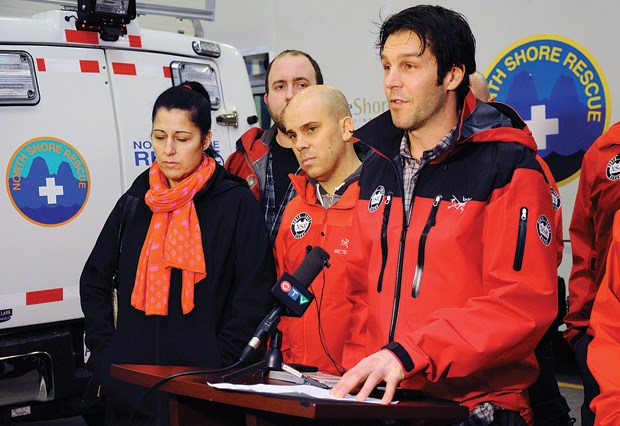 Nearly three dozen red jacket-clad rescuers arrived unexpectedly at the doorstep of one of their own, Jay Piggot, a paramedic and member of NSR’s elite helicopter team who was recently diagnosed with an aggressive form of cancer called cholangiocarcinoma.

With help from members of the BC Ambulance Service, NSR’s mission included hanging Piggot’s outdoor Christmas lights, cleaning his gutters, trimming the hedges, playing with his two young children in the backyard and ordering plenty of pizza.

“It brought tears to my eyes. It was just like (It’s a) Wonderful Life,” the 1946 Hollywood movie that has become a Christmas classic. “It’s been amazing. My wife and I have been floored by this,” said Piggot, 34.

NSR team leader Mike Danks was one of the members busy at work in Piggot’s yard on Saturday.

“It was very emotional to be honest. It was a sea of red. It seemed surreal. We got so much work done in such a short period of time. Our team is really rallying around Jay.”

NSR members have also arranged to help Jay’s wife Denise with the kids each evening and set up a “meal train” –  an online schedule that allows family, friends and co-workers to sign up to cook for the Piggots.

To alleviate the financial burden facing the family, NSR has started the Jay Piggot Trust Fund at BlueShore Financial. (Donations can be made at any BlueShore branch or by visiting rescuetherescuer.ca.)

Piggot, who works for BC Ambulance Service, isn’t eligible for benefits because he’s a part-time employee, which means no sick time or long-term disability.

“I don’t have an income. My wife has had to take time off work to take care of our children,” said Piggot.

The couple’s oldest child has been diagnosed with autism spectrum disorder and attends a special school, which is an added financial cost for the family.

“That’s hard for us because one of the biggest things he needs in his life is a daily routine and his routine needs to be exactly the same to prevent any problems. Well, you can imagine with this every day has been a mess for him.”

Piggot was diagnosed with cancer last week. He was reluctant to visit the doctor but he’d been feeling unusually tired and had some other minor symptoms, like itchy skin.

After getting some blood work done he was sent for more tests. Then came the life-changing diagnosis.

Doctors found a large tumour near his liver that’s currently inoperable but there’s hope that chemotherapy treatment will shrink it enough so surgeons can remove it.

“We don’t know the stage of it… we just know how to fight it,” he said.

“At this point we know I have a long road ahead of me.”

Fortunately, he’s got strong support from his family, friends and rescue team.

Piggot describes legendary NSR leader Tim Jones as his “biggest mentor” and after Jones passed away unexpectedly in January 2014 he offered immediate support to the family.

“When Tim died, I helped the Jones family out a lot and that’s who has really been there for me right now. Curtis Jones (Tim’s son) has rocked this out of the park,” he said, referring to his work on creating a trust fund and getting the word out about his plight.

Despite the shock of the diagnosis, Piggot has a positive mindset as he prepares to fight cancer.

“It’s like the U.S. Coast Guard rescue swimmers say, ‘You’ve got to look the grim reaper in the eye and say: ‘Not today, baby!’ That’s the way it is with me. I’m so optimistic. I’m so positive. I want the chemo to start. I want to take this on. I want to beat it.”

Piggot says he’s found his true calling as a paramedic and SAR member.

“I love saving people. I love helping people. I knew young in my life that I didn’t want to be a rich person. I wanted to do this. “It’s one of the greatest feelings in the world and I’m able to teach that to my children.”