After years of railway operations causing disruptions to the lives of Sḵwx̱wú7mesh Úxwumixw members living in communities in North Vancouver, 'positive progress' has been made.
May 6, 2021 3:19 PM By: Elisia Seeber, Local Journalism Initiative Reporter 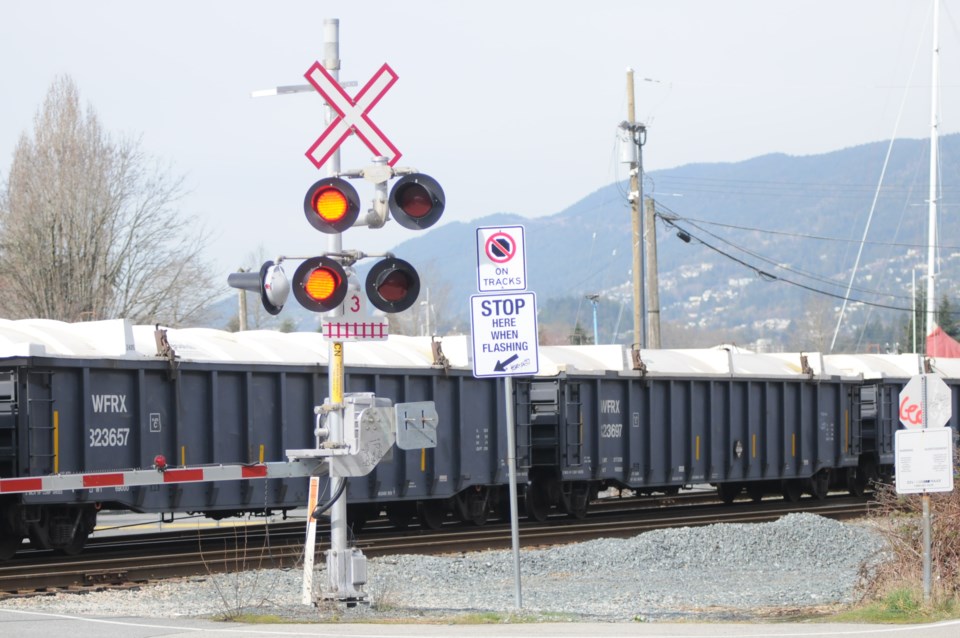 It has taken months of consultations and added legal pressure from Squamish Nation, but the Canadian National Railway Co. has now moved its train staging away from the communities of Eslha7an and Xwemelc’stn in North Vancouver.Mike Wakefield, North Shore News

After years of railway operations causing disruptions to the lives of Sḵwx̱wú7mesh Úxwumixw (Squamish Nation) members living in communities in North Vancouver, “positive progress” has been made.

It has taken months of consultations and added legal pressure from Squamish Nation, but the Canadian National Railway Co. has now moved its train staging away from the communities of Eslha7an and Xwemelc’stn.

“We are pleased to report that they have officially moved their train staging away from these communities to their Lynn Creek yard, almost completely stopping the idling that was impacting members,” council co-chairs Skwetsi7meltxw, Joshua Joseph, and Tiyáltelut, Kristen Rivers, said in a joint statement.

The council had been trying since fall to negotiate with CN Rail to adjust its operations. With three rail tracks just 30 metres from some homes in Eslhá7an, near Mosquito Creek, residents say they have been putting up with unacceptable levels of noise, pollution, and health impacts from idling trains for far too long.

Khelsilem, Dustin Rivers, spokesperson for Squamish Nation, said the issue had affected their communities now for “many, many years” and council reopened negotiations in October 2020, in the hope that immediate changes would be made for members, especially their Elders and families with young children who had been severely impacted.

Further to this, in early March, the council presented a survey of 300 of its community members’ concerns to CN Rail, which included specific feedback regarding issues around shunting, whistling, and idling during the evening, late into the night, and early in the morning.

Keith Nahanee, who has lived just 45 metres from the tracks in Eslhá7an most of his life, described the noise from trains as being 10 times that of a muscle car revving up and powerful enough to rattle the windows of nearby homes. He said residents had been dealing with trains that were left idling just across from homes routinely at around 11 p.m.

Finally, about two weeks ago when CN implemented the move, it stopped, said mother-of-seven Jamie Williams, who is one of the residents who lives directly across from the tracks on Esplanade.

Williams, who suffers from migraines, said she had noticed over the years that her severe headaches were being triggered by the fumes coming from the idling trains.

“We're directly in front of where the trains would idle,” she said. “So, it was extra loud and there were a lot of fumes. Since they’re not idling anymore, the fumes aren’t coming through the windows and my migraines have cut down by half.

As well as easing her pain, she said her children – the youngest being six months old – were also “sleeping longer at night now because it’s quieter.”

“At some points, when the trains were idling there, the engine would rev up higher,” she explained. “When they would do that it would rumble our house. Even the pictures would shake on the walls – so it would wake up my kids.”

Since the change was made, the 41-year-old said it had just “been really nice” to have a little more peace, after dealing with the issue her whole life.

Fellow resident Shellene Paull, who lives three houses down from the tracks, said CN Rail’s decision to move train staging was “a big change” for her neighbours living close to the railway lines.

“You know, the people whose walls shake when the trains idle,” she said. “The people who can't sleep at night. It will definitely be positive for everybody who lives on Esplanade.

“I think it's a good first step. We've been subject to a lot of discrimination. And, I'll call it that, because I don't know what else to call it.”

It’s an issue that Khelsilem said dated back to the colonial history of the railways within Canada and how they were developed.

“If you look at the rest of the North Shore, there's not a lot of areas where there are rail lines in that close proximity [to homes], but because of the colonial history of governments unilaterally making these decisions, including the expropriation of reserve lands to suit the rail line expansions, we have this sort of horrible legacy of racist decisions that today we're feeling the impacts of in our community.”

While CN Rail had progressed on various initiatives over the past several years to reduce noise, such as rail lubrication and installing automated gates at at-grade crossings, Khelsilem said more operational changes were needed, and, earlier this year, council felt their concerns were not being taken seriously.

After a lack of response from CN Rail on calls for short-term adjustments, including timing the rail operations so that they do not occur at night and moving idling trains, Squamish Nation sought the legal advice of JFK Law Corp. to move their fight further on March 30.

On behalf of council, lawyer Robert James sent a letter to CN Rail, stating its operations in the area constituted both a nuisance and a breach of section 95.1 of the Canada Transportation Act.

“Given the unique nature of Squamish reserve lands, Squamish is entitled to both damages and injunctive relief to remedy this nuisance,” James wrote. “Additionally, if it so chooses, Squamish may seek relief from the Canadian Transportation Agency.”

CN Rail was given 45 days to respond with a definitive plan, which has now led to the change of location of train staging as well as more open communication.

Moving forward, Khelsilem said CN is currently exploring the possibility of a protocol agreement with the Squamish Nation to address further impacts of rail operations.

“We'll be working with them collaboratively on that over the coming weeks,” he said.

“We would like to see the current changes kept in place, but also the exploration of long-term options around mitigation for the community. We want the relationship to remain strong. Even if staff change or political leadership changes, we want to ensure that we're keeping the lines of communication open.”

In the long term, they are hoping for the adoption of best practices used in other nearby areas, the erection of effective sound barriers, and the idea to move the railway underground or below grade to be explored.

Council co-chairs Skwetsi7meltxw and Tiyáltelut said based on the positive progress the council has seen in these last few weeks, they have asked their legal representatives to delay starting any legal action for a further 45 days to allow for more negotiations to take place.

“We believe CN is committed to working with the Nation to find meaningful solutions to our concerns in a respectful, productive, and positive manner,” they said.

Khelsilem said the changes wouldn’t have occurred without the community stepping forward and sharing their concerns.

“We are really grateful for all the feedback and direction we received from our members on this issue and we really hope that they continue to reach out to us and feel supported.”

For now, Paull thanked CN Rail for their efforts to “be better neighbours” and for previous changes to rail operations.

“Thank you for the gates and for not whistling through the night,” she said, adding that now she hoped they’d just “lower the speed coming around the corner.”

“I think they’re positive measures, and we’re looking forward to more of those.”

Squamish Nation is ready to take legal action against CN Rail for ongoing disruptions
Apr 2, 2021 10:01 AM