Urban trees in the City of North Vancouver might be a little safer from chainsaws in the future. 🌲
Mar 31, 2021 11:38 AM By: Elisia Seeber, Local Journalism Initiative Reporter 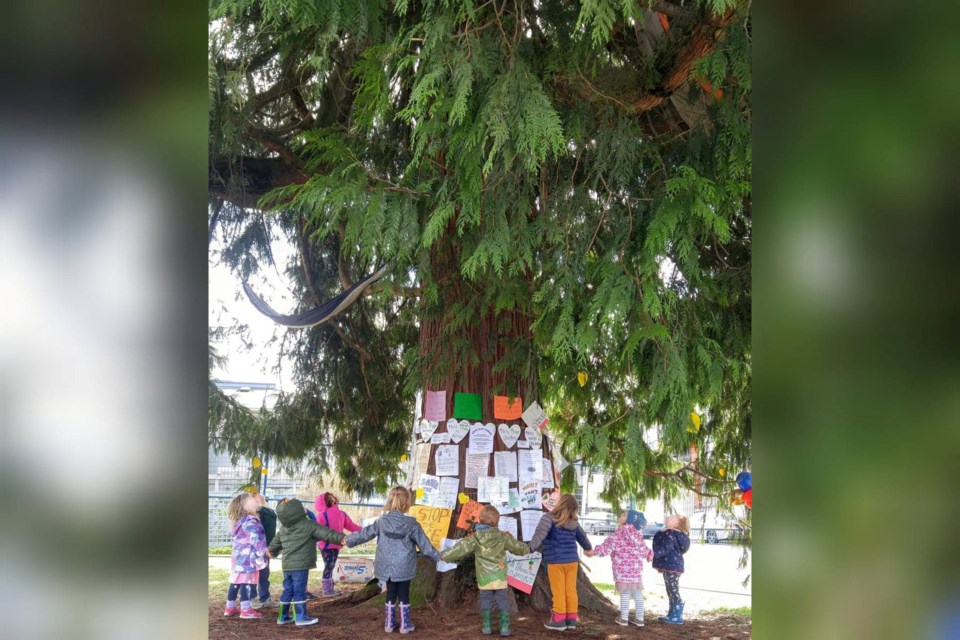 Students visit a cedar tree at 21st Street and Eastern Avenue which may be cut down to make way for development. The City of North Vancouver this week supported a motion for staff to start looking into a tree cutting regulation bylaw. Kathryn Swift

Urban trees in the City of North Vancouver might be a little safer from chainsaws in the future.

Council has unanimously supported an amended motion for staff to look into how the city might implement an interim tree protection bylaw and for staff to develop an urban forest management strategy in co-ordination with the work of the city’s Climate and Environment Advisory Task Force. The motion also calls on staff to report back on experiences from other municipalities on how similar bylaws have impacted delivering infrastructure.

Councillor Don Bell put forward the motion for regulating tree cutting and removal in the city at the March 29 general meeting. The city is the only municipality that doesn’t have a specific tree protection bylaw on the North Shore.

The District of West Vancouver adopted its tree bylaw for private property in November of 2020 after previously having an interim bylaw in place. Meanwhile, the District of North Vancouver has had a tree protection bylaw since 2012.

Both bylaws require a permit – which costs $300 in DWV – to cut down trees on private property within the districts and have protected tree species lists which include arbutus, Garry oak, and yellow-cedar, just to name a few.

If residents cut down a tree without permission, they can be fined $1,000 in both districts. The DWV bylaw protects trees of any species 75 centimetres in diameter or larger, and a number of tree species 20 cm in diameter or larger. Trees greater than 10 cm diameter or larger within 15 metres of the top of a watercourse bank and heritage trees are also protected in West Vancouver.

“You cannot cut a protected tree unless you are redeveloping your property or the tree is deemed hazardous by a professional arborist,” the West Van district bylaw states. “Permits will not be granted to cut protected trees simply to improve the view.”

The DNV protects any tree that’s within a streamside protection area, on sloping terrain, or located on the waterfront, as well as heritage, replacement, and wildfire trees.

It’s not the first time Bell has tried to protect the city’s trees. Back in 2016, he put forward a similar motion for staff to report back with recommendations, which passed, but the following motions put forward to council later in 2017 were not supported.

Bell said the previous council decided to continue the regulation of tree management through the development process and added that they also created a dedicated tree planting program at $75,000 a year.

“It's been four years since that motion was passed, I think we've seen concern exhibited about the loss of tree cover and the role that urban forests play in the environment,” Bell said.

“I think that my concern is that the redevelopment process doesn't cover the full spectrum of potential tree removal or tree damage that can be done, even on private property, and I know that private property owners have rights, but they also have responsibilities to the community at large, and it's our job to ensure that that the community is protected.”

He also highlighted how important the urban forest was to the well-being of the community, whether it is providing clean air, shade, or mental health benefits.

“Quite often people say the reason they come to the North Shore is because of the trees and the natural environment that we have here,” Bell said, adding that the issue required a big picture approach, amending the motion to include staff looking into an urban forest management plan similar to the one the City of New Westminster has.

Timely matter as residents fight to save cedar tree

The motion is timely, as city residents continue to fight to save a much-loved cedar tree that community members estimate to be 205-years old based on its circumference. The cedar at 21st Street and Eastern Avenue may be cut down to make way for the redevelopment of the Harry Jerome Neighbourhood Lands.

Councillors made mention of the old cedar tree in their comments.

“I’ve been now to the famous cedar in our community and I've heard the opinions of those seeking to protect it, and to be honest, even before this specific cedar, I know there were inquiries in our community about the need for greater tree protection,” Coun. Tony Valente said.

“I think in addition to that, with the pandemic, with what's going on in our community and the world, the view on trees and their value has been increased. In the past, maybe sometimes there were values that favoured economy over environment, but I think we're seeing a shift now and we need to be responding to that.”

The city needs to 'balance all priorities'

While Buchanan said she thought “trees and forests are absolutely an essential part of the North Shore’s identity,” she also stated the city needed to balance all its priorities.

“An urban forest management strategy allows us to look at trees in a very comprehensive way, providing a clear and balanced approach to protecting and expanding the urban forest in our city, and the critical need to deliver housing, childcare, and rapid transit to the North Shore,” Buchanan explained.

“As more people move to the city and call it home, we will continue to need housing and public infrastructure, as well as green space. We must commit to both.”

Staff will present a report to council at a later date.