City of North Vancouver breaks ground on The Shipyards project

Work has officially begun on The Shipyards, the hub in the City of North Vancouver’s long-held plans to revitalize the waterfront in Lower Lonsdale.

Dignitaries gathered Tuesday for a groundbreaking at the 1.6-acre site that, by the end of 2018, will host a seasonal outdoor covered ice rink and water play area, community amenity space, and 60,000 square feet of commercial space, including a 70-room, four-star boutique hotel and two-storey restaurant.

The ceremony was timed almost a year to the day Quay Property Management, the parent company of Lonsdale Quay, was named the city’s partner to develop the lands, where ships were once built.

Taken together with the new North Vancouver Museum planned for nearby Carrie Cates Court, the Polygon Gallery, which is now having its reflective metal cladding installed at the foot of Lonsdale, the “megabench,” the Pipe Shop’s reuse as an events venue, the Tap & Barrel in the Coppersmith Shop and the Spirit Trail, the vision for Lower Lonsdale is nearly complete, said Mayor Darrell Mussatto.

“It’s really exciting. It’s the first step of the last phase of the redevelopment of the waterfront,” he said, noting it had been a passion project of his since he first ran for council in 1993.

“I snuck into the shipyard with a photographer and had a picture taken of me and the shipyards, saying, ‘Very soon, this is going to be a vibrant place for people to access the water and to live and shop and recreate.’ I’m a little bit off on my timing. That was almost 25 years ago. But I’m very happy to see this coming together now.”

Under the agreement, Quay Property Management will pay the $35-million cost to develop amenities and commercial space and lease them from the city. 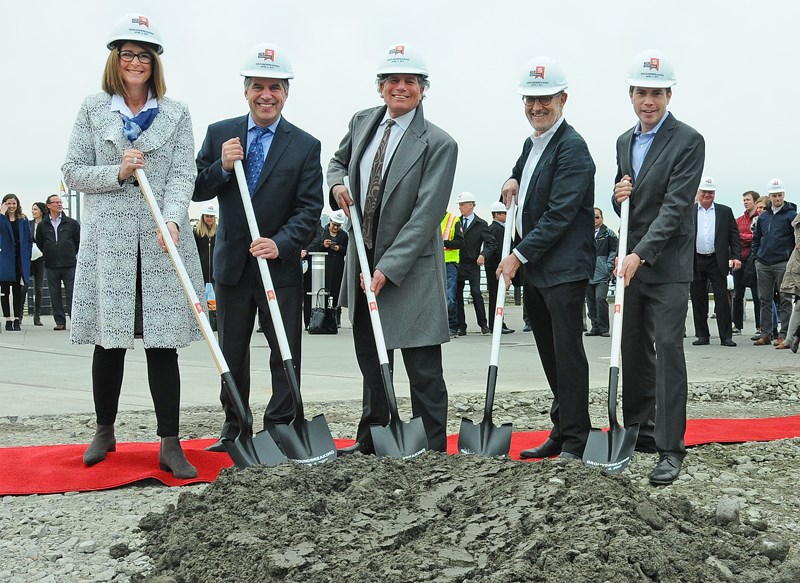 “We’re excited to be that final piece that’s going to make the waterfront in North Vancouver definitely a destination in the Lower Mainland, we think – a destination internationally as well. We are sitting on a jewel of a piece of property and we’re proud to think that, with the city, we’re going to bring this to fruition and make it a real icon for the North Shore,” said Gary Mathiesen, president of Quay Property Management.

The city will be responsible for building the 144 new parking spots as well as paying for the operations and the $5 million in costs to remediate the soil left contaminated from its time as a shipyard.

Taylor Mathiesen, director of operations for QPM, said the quay and city are working closely and bringing outside experts to make sure the rink works for the local climate.

“The last thing we want is to build this beautiful ice rink that’s slush,” he said.

Operators for the hotel and restaurant will be announced later this month, Taylor added.

“It’s really exciting. It’s going to be a major attraction for the area,” he said.