City of North Van to save 1911 Mount Crown Block 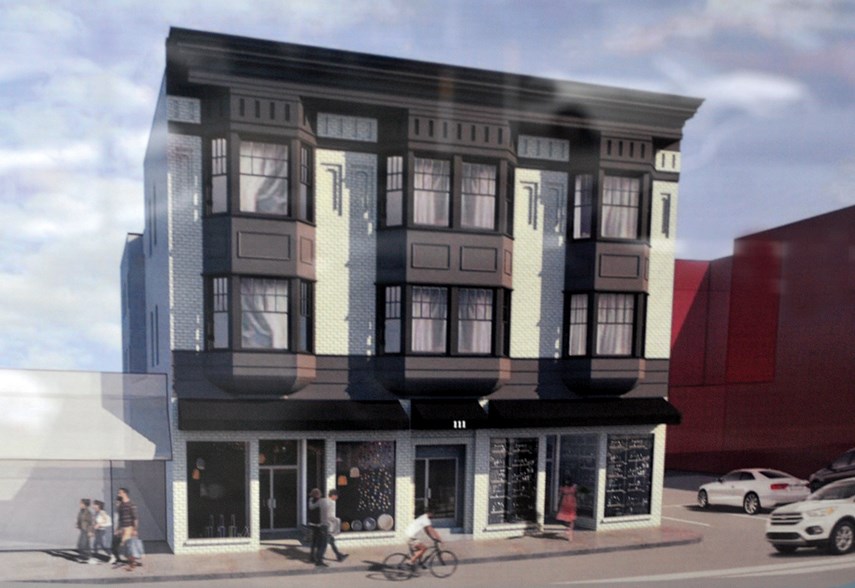 The Mount Crown Block at 109-115 East First St. now has permanent heritage protection. City of North Vancouver council voted 5-1 Monday night to approve a heritage revitalization agreement that will see the façade of the building restored to its original glory in exchange for allowing the owner to rent out two storage spaces fronting LoLo Lane as new storefronts.

The landlord has already lined up prospective tenants for the two commercial spaces – a donut shop and a fried chicken joint.

That proved a sticking point for the only person who turned out to speak about the project at a public hearing held prior to the vote. Todor Penkov  said he already has to deal with noise coming from the lane, mostly because of the nearby brewery. Adding deep fryers would also pose the prospect of unwelcome fumes drifting into air intakes and windows.

Coun. Don Bell said he sympathized and cast the lone nay vote on the proposal. Bell said he appreciated the heritage aspects of the building and didn’t mind the non-compliance with the zoning. But with parking, noise and vehicle access issues in the lane, he said he couldn’t support allowing more commercial use there. “When the laneway brewery came up, I voted against it for that reason,” he said.

Mayor Linda Buchanan said she expects city staff to keep a close eye on LoLo Lane to mitigate any concerns that neighbours might have. The heritage revitalization agreement was a positive step forward, she said. “All in all, I do really look forward to seeing this finished product. I think it’s imperative for us to keep the heritage that we can in the city. I think it adds to that vibrancy of having a mix of brand new and old.”

The building predates the city’s zoning and building bylaws. If built today, it would violate a number of rules related to height, density, parking minimum and setbacks, and it encroaches on the city-owned right of way. As a result of the vote, council will also formally forgive those irregularities.

Coun. Tony Valente recused himself from the discussion because he lives nearby.