With expanded patios, alcohol in parks and reallocating road space for pedestrians and cyclists, the City of North Vancouver is about to undergo a big makeover to its public realm this summer.
Jun 2, 2020 12:02 AM By: Brent Richter 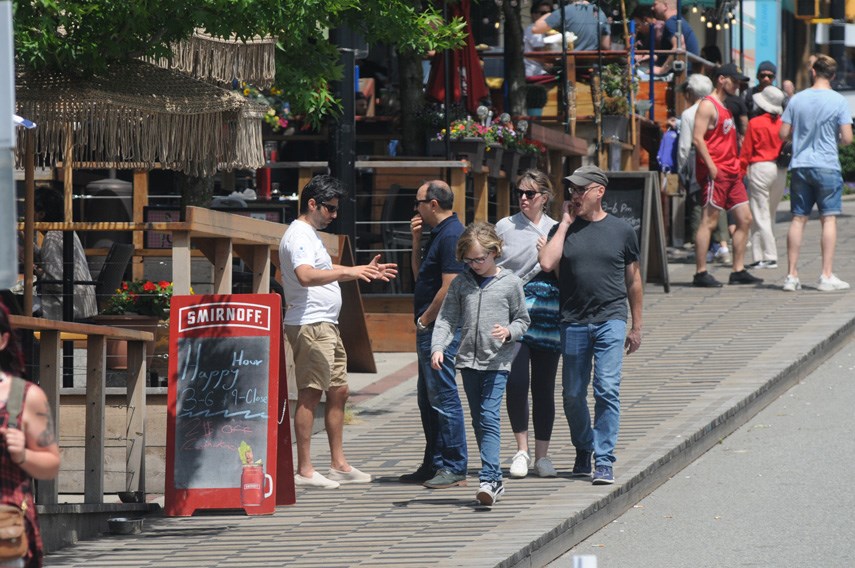 With expanded patios, alcohol in parks and reallocating road space for pedestrians and cyclists, the City of North Vancouver is about to undergo a big makeover to its public realm this summer.

Council voted Monday night on a series of changes meant to help the city bounce back from COVID-19 and boost quality of life in the process.

Under the “open streets action plan” approved unanimously by council, 12 kilometres of city streets in commercial areas will temporarily have vehicle travel lanes removed to accommodate wider sidewalks and expanded restaurant patios and parklets, or, in residential areas, have their speed limits reduced and be closed to non-local traffic.

Commercial areas on the list include Lonsdale Avenue from the waterfront to Third Street and again from 13th to 18th, Queensbury Village and the Brewery District.

Residential streets selected for traffic calming include St. Andrews Avenue, Second between Forbes and Moody Avenue, 17th between Jones and Rufus Avenues, 27th between Larson Road and Tempe Crescent and Tempe between 27th and 29th.

The city has already made changes to the west side of Grand Boulevard, Victory Ship Way and some smaller segments of Lonsdale.

Mayor Linda Buchanan acknowledged that not everyone would be happy but suggested the moves may prove popular even after the health and economic crises had subsided.

“We have more than enough space. Lonsdale is 100 feet wide,” she said. “Is it going to be perfect? Probably not. Are we going to make mistakes? Probably. But we are going to do our best to make sure that people have the physical distance that they need from each other, that our businesses have the space that they need.”

Slower, quieter streets will be a boost to everyone’s physical and mental health, while businesses can expect a bump in sales, Coun. Tony Valente said.

“We are doing something that cities don't usually do, which is being flexible, and adapting and I think that's something that our residents will appreciate. I see this really as something that we're doing to improve the quality of life in our city,” he said. “The data says that typically you're looking at a 40 per cent increase in spending in these businesses, and that's been replicated in numerous cities.”

Earlier in the day, the city began accepting applications from restaurants and pubs looking to temporarily expand their patio space under more lenient regulations.

Coun. Don Bell supported the open streets plan but cautioned the rest of council they would need a robust communications plan, because no one wants to come home to find an unexpected roadblock on their street.

“There's an old adage that people like progress - they just hate change. And I think we need to be able to communicate to them how this is progress, and how it's going to make things better for them,” he said

The majority on council also supported a proposal to make the city the first Canadian jurisdiction outside of Quebec to allow public consumption of alcohol.

Under the Liquor Control and Licensing Act, municipalities may allow beer, wine and spirits in public spaces, as long as it is within proscribed hours and within an area designated by signs.

The park areas on the list include Waterfront Park (minus a 20-metre buffer around the children’s playground), Victoria Park, the grassy area on the west side of Mahon Park, the civic plaza between city hall and the library, Grand Boulevard and the northwest corner of Ray Perrault Park, Kings Mill Walk, Shipbuilders Square, and Cates Deck. People may enjoy a tipple in the park between 11 a.m. and 9 p.m. as soon as signs are printed and posted, which staff estimate should take about a week.

With 80 per cent of city residents living in multi-family homes, the intent is to provide a more welcoming environment for picnics after people purchase a take-out meal and some drinks from local restaurants or breweries, according to staff.

Bylaw officers and the RCMP will step up patrols in the designated drinking areas and respond to cases of excess noise, public intoxication, littering, underage drinking and impaired driving as they would normally. But Buchanan said she expects city residents will handle the new policy with maturity.

“Many people will see this as progressive but this happens all over the world,” Buchanan said. “This is about treating adults like adults.”

Coun. Holly Back also questioned the logic of making people stash their post-soccer or volleyball beers.

“We want to be one of the most vibrant cities and I think this is just one more step forward to being that,” she said.

Concerned about litter and overflowing garbage bins, Coun. Tina Hu encouraged everyone pack out whatever they pack in for their picnics in the park.