Mayor Linda Buchanan talks about how the city is tackling COVID issues in a State of the City address
Nov 23, 2020 7:05 AM By: Elisia Seeber 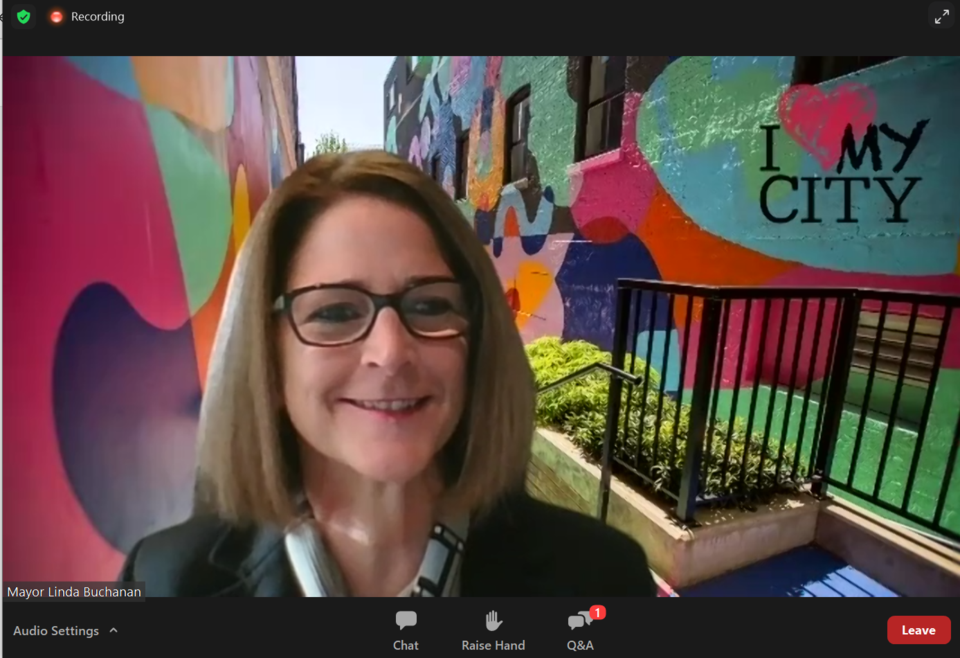 When it comes to addressing issues arising from the COVID-19 pandemic, City of North Vancouver Mayor Linda Buchanan is hoping the city’s recovery plan will create “long-lasting positive change.”

In a State of the City address Thursday, hosted virtually by North Vancouver Chamber, Buchanan said ever since the pandemic began, she hadn’t been “content to stand idle and wait for the world to go back to the old normal.”

Buchanan, who has led the city as mayor for the past two years, said council’s full attention had been on mitigating the local impact of COVID-19, and that moving forward she would focus on supporting business resilience and the well-being of people.

“When we talk about recovery, we need to consider long-lasting positive change,” she said.

“The people who keep our businesses open and the economy running need to be at the heart of our recovery,” she said.

“The city will work at the intersection of health and the economy.”

Moving forward, Buchanan said the city had created an economic investment plan with a goal of supporting existing businesses and attracting new talent, investment and enterprises.

The city will look to grow the economy around industries such as the Asian Pacific trade corridor and terminal operators, shipbuilding, the film industry and construction, as well as key anchor employers in the public sector such as education, insurance, and health.

Buchanan said the city would also work to continue attracting young people and families to the community – mentioning the importance of partnerships with institutions like Capilano University, Metro Vancouver, and the health authority.

“With a constrained land supply, the city will make every effort to preserve remaining industrial land, including ports, supporting land and light industrial areas to maintain a diversity of employment opportunities,” she said.

“Our new development and investment plan will focus on specific areas of action that will support business startups and innovation, small business viability, skill development and retraining.

“This is the moment where we need to support the innovators, the creators and the dreamers.”

She said the pandemic had reaffirmed the importance of public infrastructure, such as childcare, affordable housing, and public transit.

“As we rebuild our economy, we must also commit to investment in this public infrastructure,” she said.

Buchanan said the city would continue its commitment to finding solutions to transit problems, making mention of the city launching North Vancouver's first RapidBus line in the spring, connecting the North Shore east to west, and the Burrard Inlet Rapid Transit feasibility study, which has found several geo-technically feasible options for creating a fixed rapid link to the North Shore.

She noted that the issues surrounding affordable housing and public transit were deeply connected and would take a combined effort from municipalities, the province and local business and industry to fully address.

“We cannot accept this burden.

“We need to look at new and innovative ways to deliver housing such as mass laminated timber, rent to own, and the new cohousing model.”

Looking back at the year, Buchanan spoke proudly of how the city had taken decisive action to bend the curve, also commending the efforts of local businesses, non-profits, and community members who pivoted and adjusted to new challenges quickly.

“I have to say I have never been prouder of this community as it's come together to lift each other up during these difficult times,” she said.

Through the creation of the business advisory working group, the mayor met with different sectors to hear how they had been impacted by the pandemic and what they needed to recover successfully.

One of the initiatives that came from it was the introduction of a temporary patio program to provide additional service space on public streets for food, beverage and retail businesses. In September, council unanimously approved to extend the program until the end of the pandemic, and to allow for the winterization of outdoor dining.

Buchanan said the city also launched the Walk N’ Shop in the city campaign, to help struggling small businesses, which included an interactive map where businesses could share details of their new services.

“By connecting consumers with local services and retailers, we're aiming to both strengthen our local economy as well as our sense of community,” she explained.

Other summer city initiatives that helped support businesses and community members included new shipping container parklets, public art installations and the introduction of a bylaw to allow the consumption of alcohol in designated public parks and plazas.

“When we introduce policy that addresses the needs of people and supports businesses, we're building community and we know we're taking steps towards becoming the healthiest small city,” Buchanan said.

When it came to other ways of helping small businesses, Buchanan said the city was pushing the province for a split tax assessment – to allow the city to put a lower tax rate on the development air space above small business – and looking at ways to streamline permit applications and create more space to allow for social distancing in public areas.

Buchanan touched briefly on the city becoming more and more of a tourist destination and the importance of supporting business through this growth, mentioning the Rogers Hometown Hockey event, cancelled due to COVID, which would have brought people from all corners of the region to the North Shore and showcased the city to the nation.

“I remain optimistic that we may one day get asked again to host such an event,” Buchanan said, highlighting the city had many draw-cards, including its growing brewery district in the Lower Lonsdale area.

While she wants to tackle the recovery with positivity, Buchanan said it would be an undeniably difficult time moving forward.

“The next couple of months and years will not be easy. This pandemic is far from over and there is more work to do," she said.

“I am committed to leading us forward and building on that work we've done over the past two years, and by those who care before us, so that the city is a better place for future generations of families, workers and businesses.”