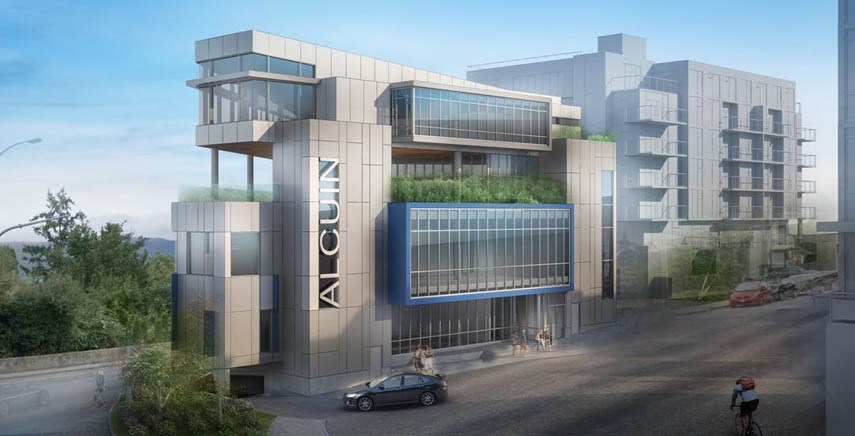 Alcuin College's proposal for an additional floor on their Lower Lonsdale school was approved by City of North Vancouver council after a lengthy public hearing Monday, March 1.Alcuin College

City of North Vancouver council voted 6-1 early Tuesday morning to allow the non-profit independent school to add a fourth storey on to its already under-construction school at 63 Mahon Ave.

Council rezoned the land in 2017 to allow a 2.5-storey building but the school’s leaders came back in 2020 seeking an additional fourth-floor multi-purpose space to be used by students during the day and made available to the community after hours. They have committed to giving non-profits, community groups and the Squamish Nation access to the site for free up to 10 hours per week.

The vote followed a 5.5-hour public hearing at which close to 100 residents spoke to council. About 80 per cent of those who called in spoke in favour – the vast majority of them parents, students, alumni or staff from Alcuin.

Grade 3 student Nima Tavakoli was particularly excited at the thought of having gym class on the fourth floor.

“Our school does not have a gym right now so we have a walk to our gym, which is not always fun, like when it rains,” he told council. “You also have to be careful because of all the cars. If we had our own space, we will be able to spend time playing in the gym instead of walking to the gym.”

Those who spoke in favour tended to live farthest from the site. The nearest neighbours largely opposed the extra floor, worried the space would result in late-night noise, extra traffic and increased competition for already scarce street parking, and for some, a loss of water views.

Neighbour Amit Parikh said no one opposed the original plans for the smaller building and that council should listen to residents who live closest to the site.

“Isn’t that the main reason we're here tonight to examine the impact of the school expansion on the community? I’ll leave this information with you to think about carefully as you decide who it is that is really benefiting from a larger school that includes a commercial use that is completely incompatible with school use,” he said.

Stella Ablett, head of school for Alcuin, said plans for the extra space are more along the lines of convocations, art exhibitions, guest speakers and citizenship ceremonies rather than booze-fuelled shindigs.

“We don’t really see wedding parties. We don’t,” she said.

Looking to ensure the neighbours wouldn’t be left with any hangovers, Coun. Angela Girard moved that alcohol only be permitted on the site via special event licences on a pilot basis while the city closely monitors, a motion that council supported.

The vote to add an extra floor passed with only Coun. Holly Back opposed. Back said she shared many of the neigbours' concerns and also noted how many supporters actually live in the districts of North Vancouver or West Vancouver, not the city.

“It was pointed out actually a few times the majority of the speakers were from outside the city. And if we're here supporting our city people, I don't think we're doing a very good job,” she said.

Coun. Tony Valente, however, argued the change being requested was an improvement, even if the closest neighbours don’t see it that way now.

“I do recognize the impact it will have on some folks, and that's very difficult. I recognize that. But, as a councillor, I need to look at what's best for the wider city community as a whole,” he said.

Coun. Jessica McIlroy said she had no concerns about the space leading to more conflicts in the community.

“I believe that the school has every intention of providing the space for community benefit and not for a significant revenue generating opportunity or large events as some may believe,” she said. “Overall, the school has a proven record of being a good neighbour at their current location and being very conscious of their impact in the community.”

Ultimately the school and the additional multi-purpose space make Lower Lonsdale a more complete community, Mayor Linda Buchanan said. She also called out a campaign opposing the change for using misinformation to cause unnecessary angst and erode faith in council’s process.

“I, for one, have been extremely disappointed to see some of the tactics used over the last several months in order to, I would say, really cause confusion with the community. And I think, at a time when people are feeling extremely stressed and we are looking at supporting one another in community, really we want to have a much higher level of civic conversation and integrity…” she said.