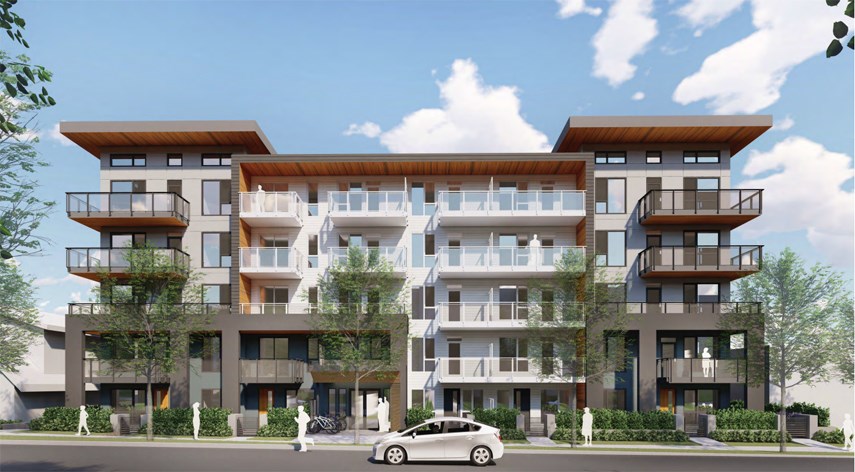 An artist's rendering shows how the new six-storey rental building approved by City of North Vancouver Feb. 22 will look when completed.Integra Architecture

The project consists of 69 rental homes, seven of which would be offered at below market rates, plus an amenity space on the sixth storey, all on top of a 47-stall underground parking garage.

Of the 20 tenants facing demoviction, 14 have already moved out. Of them, 11 are still in the neighbourhood, according to the developer.

Of the dozen-plus people who wrote or called in to council to oppose the project, the most commonly expressed concerns were more demand for limited street parking, and how the building’s height and density would fit within the character of the neighbourhood, which is mostly two- to four-storey buildings. Others urged council to add badly needed rental units to the community, which has a vacancy rate of 1.1 per cent, according to CMHC’s last study of the market.

Council spent close to two hours listening to public feedback and grilling staff and the developer for details about the proposal, but their vote to rezone the land was unanimous.

With its proximity to the R2 RapidBus on Third Street, Lonsdale shopping and a AAA bicycle network, family-sized units and below market rentals, the project ticked a lot council’s boxes.

“Buildings are changing and, yes, they're going one and two and three floors higher. But we need that housing. The only way we can do it is by making larger buildings,” said Coun. Holly Back. “It's a very walkable area – a block off Lonsdale and very close to the Quay. And it also creates a really vibrant area, which is exactly what we're trying to do in our strategic plan.”

Coun. Jessica McIlroy said the project, and other ones like it, are steps towards addressing both the climate and the affordability crisis.

“(We have) data that shows us that we need denser housing in order to address our carbon footprint and how people move around,” she said. “The development fits in line with all of the city plans that we have.”

Mayor Linda Buchanan spoke directly to the anxieties felt by people when they see change happening in their neighbourhood but, she added, she still has a mandate to ensure the city remains a welcoming place for people of all income levels.