Elderly tenants of a rental apartment building in West Vancouver say they’re suffering because the eight-floor building’s elevator has been broken for six weeks – with no fix expected anytime soon.
Nov 1, 2016 3:39 PM By: Jane Seyd 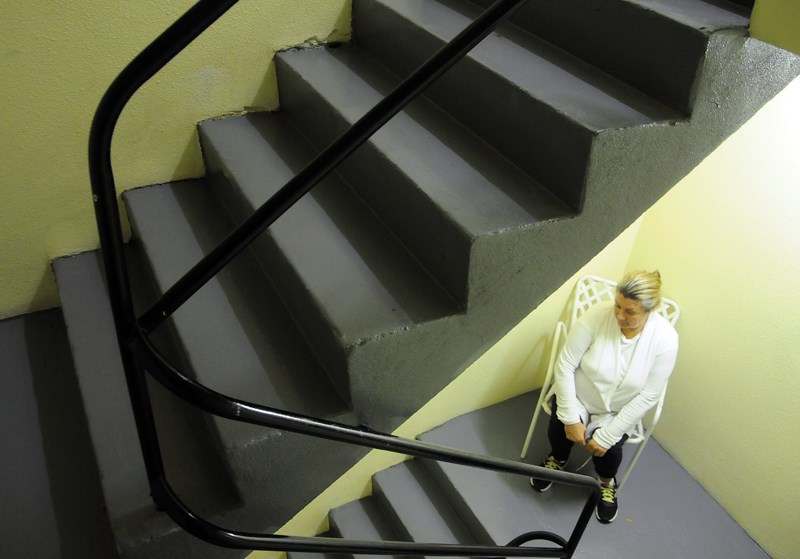 Elderly tenants of a rental apartment building in West Vancouver say they’re suffering because the eight-floor building’s elevator has been broken for six weeks – with no fix expected anytime soon.

One 85-year-old tenant on the fifth floor said he hasn’t left his suite since the elevator was damaged in an electrical fire Sept. 21 and feels like a prisoner in his own home.

“I haven’t left for a month,” said Sydney Rose, who has lived in the Sea and Stream building at 1765 Duchess Ave. for the past 18 years.

Rose said he’s made do with help from his stepdaughter and his neighbours, who bring groceries and deliver his daily newspaper, but is starting to go stir crazy trapped in his apartment.

“I’m going around the twist. I’m getting cabin fever,” he said.

Rose said before the elevator broke he made a point of going for daily walks in the neighbourhood. “I’m still mobile when I’ve got access, but I can’t handle the stairs,” due to a back injury, he said.

Allan said she makes fewer trips in and out of the building now. “I have to think about ‘Can I walk up those five flights of stairs?’ I have stayed in a few days.”

Allan said she has arthritis in her knees and has had to rely on the building’s caretaker to help bring up groceries to her apartment.

“I can get up comfortably to the third floor,” she said. “But the last two…”

“I’d like to know what other buildings wait this long (for repairs),” Allan said.

Both the District of West Vancouver and the fire department said the issue is not one they have any control over.

Assistant Fire Chief Jeff Bush said the elevator was knocked out by an electrical fire in its control room.

But as long as residents have two means of exiting the building through stairwells it meets all fire regulations, he said.

Residents aren’t supposed to use an elevator in the event of a fire anyway, he said.

But residents said it’s hard on people with mobility problems to go up and down several flights of stairs each day.

Many tenants are long- term and so have “aged in place,” said Alexandra Steele, who added she’s worsened an injury to her calf muscle by having to climb the stairs every day.

Residents recently got a community mailbox installed outside the building’s entrance, but had their mail delivery stopped completely for several weeks when the elevator stopped functioning.

Doing laundry in facilities on the ground floor is another challenge, said Catherine McKinnon, who has lived on the third floor for 20 years.

“I have high blood pressure and I get out of breath,” she said.

Notice of an annual rent increase to take effect in January arrived right around the same time as the elevator broke down, she said.

“We definitely shouldn’t be paying that,” she added.

Gerhard Prange, the owner of property management company Vista Realty, said he’s doing what he can to get the elevator fixed.

“We feel bad about this,” he said, adding Otis Elevators is “working on getting this thing up and running. I’m in contact with them pretty well daily.”

Prange said his understanding is that part of the delay is because it’s difficult to find parts for a 50-year-old elevator. “They’re not readily available,” he said.

Getting a new elevator would take even longer, he said. “The building would be without an elevator for six months.”

Prange said he plans to speak with the owners – who don’t live in Canada – about reconsidering the rent increase in light of the elevator troubles.

So far, Prange said he has no word on when the elevator will be fixed.

“I feel just terrible,” he said. “I can’t push this elevator up and down myself.”

Jodi Hynes, a spokeswoman for Otis Elevator, said she couldn’t provide a time frame when the elevator might be fixed.

“Unfortunately, the elevator requires extensive repairs to critical components and rigorous quality testing before it can be safely put back into service for residents,” she said in an emailed statement.

A spokesman for the province said in an emailed statement that tenants can apply to the residential tenancy branch for a repair order and a reduction in rent in cases where a landlord has not conducted appropriate repairs or has restricted tenants’ access to services.

So far, none of the tenants in the building have complained to the branch, he said.

The building at 1765 Duchess Ave. is owned by a numbered company, whose directors list their addresses at a post office box in the Channel Islands.

The 2016 assessed value of the property is $11.4 million, with land value making up about $8 million of that.