Blue Cabin restoration a window to past

An artist-couple restoring a beloved piece of North Vancouver history uncovered a surprise when they reached the bowels of the Blue Cabin.
Sep 26, 2017 4:28 PM By: Maria Spitale-Leisk 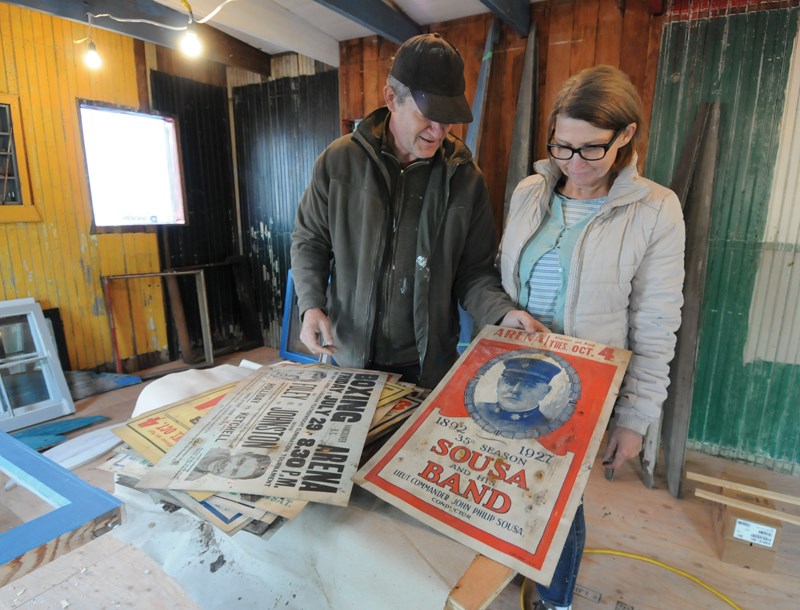 An artist-couple restoring a beloved piece of North Vancouver history uncovered a surprise when they reached the bowels of the Blue Cabin.

Since June, Mayne Island artists Jeremy and Sus Borsos have been carefully taking apart pieces of the fragile 90-year-old Blue Cabin, which once sat on the foreshore during Dollarton’s storied squatter era.

Now plunked down in a sheep pasture at Maplewood Farm, the colourful cabin with its distinctive curved roof and red shutters is getting a gentle makeover.

Flake off what’s loose on the cabin and leave what stays – that is Jeremy and Sus’ game plan for preserving the heritage. Working alongside each other, the couple pulls out each piece of the puzzle individually, while making mental and physical notes of the cabin’s original blueprint.

Along the way, they have found tiny hidden treasures of yesteryear fallen between the cracks of the cabin – marbles and buttons mostly. But when Jeremy and Sus took up the weathered floorboards, they found invaluable souvenirs from a bygone era.

The couple noticed printed paper used as insulation at one end of the cabin. Pulling up boards one by one, excitedly making their way to the other side, Jeremy and Sus found frayed pieces of Vancouver history entombed in the subfloor.

The first poster that caught Jeremy’s eye was the only one turned face up: a magic act at the Orpheum Theatre, billed as the Wonder Show of the Century.

“So this is for a film called The Unwanted, and it’s like a newsreel,” explains Jeremy, carefully flipping over the fragile posters.

One of the posters promotes an event from the early day of the Pantages Theatre in Vancouver, built in 1907 and considered the oldest remaining vaudeville theatre in Canada until it was torn down in 2011.

Another poster advertises a film about an epic boxing match between Gene Tunney and Jack Dempsey.

Jeremy’s friend, a former sports writer, marvelled at the poster’s history, saying: “Wow, that fight – that was the famous long count.”

Each poster unveiled is like a Jeopardy game where Jeremy guesses at the history.

He’s dated all the posters. All but one were printed with only a month and day on them.

That poster advertised a concert with American composer John Philip Sousa, known primarily for military and patriotic marches, who played the Orpheum in 1927.

“And yeah, so that just blew me away,” says Jeremy, of the unintended time capsule and, more importantly, timestamp for the cabin.

The speculation is that whoever built the cabin knew a printer or a paper dealer who provided the free insulation. Blank pages the size of posters were also found interspersed within the approximately 30 prints.

The public will get a chance to see a piece of Vancouver history when Jeremy and Sus bring the posters to the Seymour Art Galley for an artist’s talk on Oct. 3 at 7 p.m.

The plan for the old posters afterwards is to display them in an exhibition at Vancouver’s Grunt Gallery in June.

The Grunt Gallery and Blue Cabin Committee are the driving force behind the restoration project, estimated to cost $550,000.

A floating artist’s residence is the vision for the cabin once it’s restored.

So far the committee has raised $210,000, through funding from B.C. Museums Association, the province, B.C. Arts Council, City of Vancouver and the District of North Vancouver.

Back at the farm, Jeremy and Sus have been getting plenty of attention from kids and animals drawn to the rectangular cabin.

The project has been an exacting, yet fun exercise for the couple.

“We’re losing a lot of this stuff (heritage) so when you find something like this, this traces it back – this is the thread we hang onto,” says Jeremy of the posters and the Blue Cabin itself.

The couple plans to leave the farm in late October – but the finished cabin will remain on-site until a barge is found.

Each numbered, the floor boards will be the last piece of the puzzle to be put back together.

The challenge is to recreate the eccentric details masterminded by the cabin’s last inhabitants, artists Al Neil and Carole Itter, during the 50 years they lived on the shore near Cates Park.

Any additions were often done on a whim and without architectural consideration.

One time Neil wanted more natural light in the cabin so he talked his friend with a chainsaw into coming over to carve out a window.

For their part, Jeremy and Sus are confident their handiwork will preserve the cabin’s history.

“Oh, it will be good for another 80 years,” says Jeremy, who will be putting some current newspapers under the floorboards as a surprise for another generation.