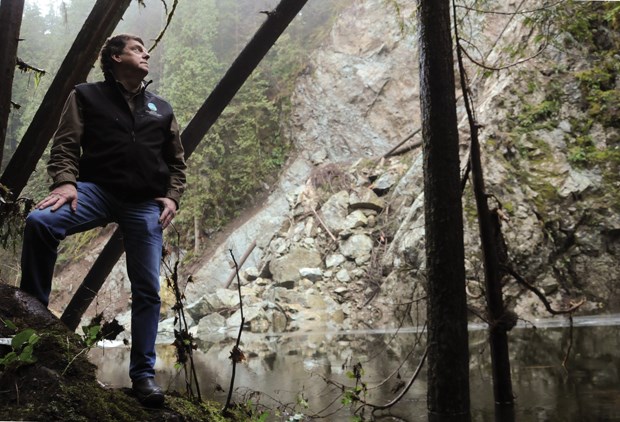 The Seymour Salmonid Society is floating a plan to use explosives to slowly chip away some of the 50,000 cubic metres of rock that slid into the Seymour River in December 2014, creating a permanent new pond and blocking the path of spawning fish.

“When the slide happened, we in the salmonid society had a gut feeling the slide was impassible for juvenile fish heading out to the ocean and mature fishing coming back to the river,” said Shaun Hollingsworth, president of the stewardship group.

To test their theory, the society volunteers radio-tagged 30 incoming mature coho salmon below the slide in 2015, none of which made it up the pool above. UBC researchers also implanted acoustic tags about the size of a grain of rice in juvenile fish above and below the slide site in hopes. Of the fish released below the slide, 90 per cent made it to the estuary. Of those released above, none made it past.

“In the summertime, especially last summer with the limited rain, the water did not come over the top. It crept down through the rocks below. We’d hoped they might find a way through down there but now this acoustic tagging has proved there’s no passage,” Hollingsworth said,

Without intervention, it would mean the end of the Seymour as a salmonid-bearing body of water. It currently holds summer- and winter-run steelhead and summer- and fall-run coho.

Acting on their gut feeling, the association also raised money and hired Northwest Hydraulic Consultants to study the slide to come up with some possible solutions.

The society then convened a roundtable including the District of North Vancouver, Metro Vancouver, the province, the federal government, Squamish Nation and Tsleil-Waututh Nation, all of whom have reached an agreement in principle on the plan.

Over the next two to five years, rock scalers will drill into the debris and set off low-velocity explosives, breaking apart the rocks. High-water flows courtesy of storms and runoff will then sweep the debris down into the 200-foot-deep canyon below.

But whether it’s two years or five, the fish are still going to need in and out every year.

For that, the society is partnering with the Squamish Nation to build an aluminum fish fence making it easier to “trap and truck” the fish back up above the slide site.

Though they’ve reached an agreement in principle with the various governments, they still need final approvals. There’s also the matter of funding.

The federal Department of Fisheries and Oceans has jurisdiction over salmon and the province oversees steelhead so Hollingsworth is appealing to elected members at both levels. North Vancouver MLAs Jane Thornthwaite and Naomi Yamamoto, who is also a volunteer with the society, toured the site with Hollingsworth on Tuesday.

“If we could find the money, we’d start tomorrow because all that snow has to come down,” he said.

Even with reshaping the slide enough to allow spawning fish to pass, there will likely be a deep pool remaining on the north side, according to Bob Cavill, Metro Vancouver watershed division manager.

“The conditions that we had earlier probably won’t be the same even in the future because there is a fundamental change there,” he said.
Metro Vancouver, meanwhile, is working on a plan to restore the Fisherman’s Trail and a bridge crossing that were rendered unsafe by the higher water.

“We’ll move to detailed design this year, which is the last stage before actual construction so we’re looking at, hopefully, construction in June (2017) but that would be subject to budgets, which are typically done later this year,” he said.