'Top-up of snow' on the way for North Shore mountains 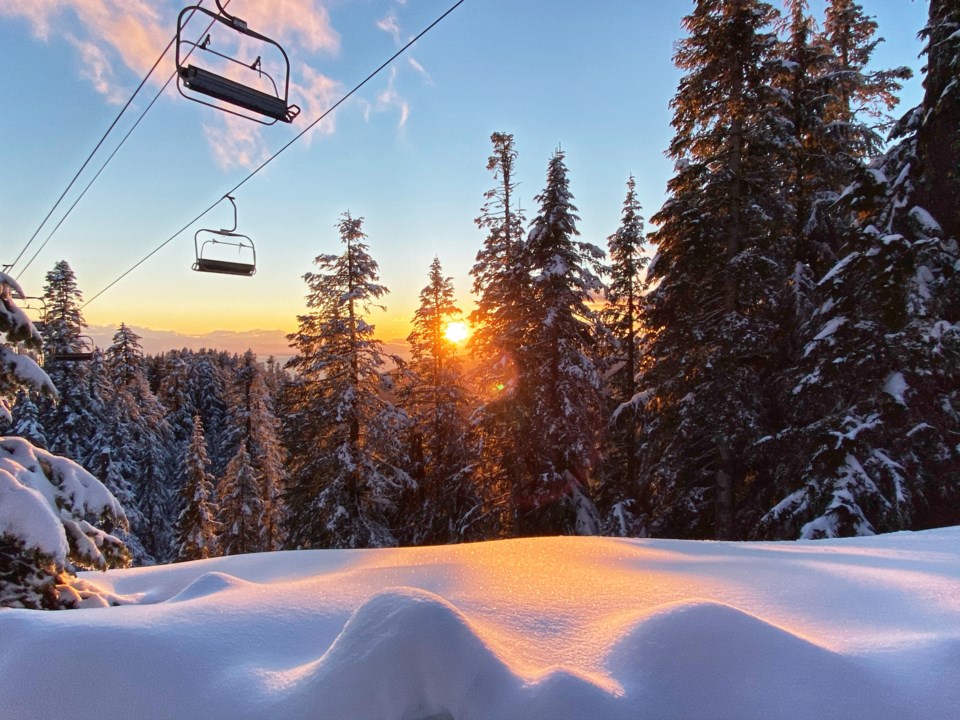 The North Shore ski hills are expected to get a top-up of fresh snow this weekend. Getty Images

While the North Shore mountains haven’t had much snowfall over the past week, boarders and skiers can expect a lot more fresh powder on the slopes this weekend.

The last seven days has only seen around seven to nine centimetres of snowfall on the local ski hills – Cypress Mountain Ski Resort on Hollyburn Mountain and Mount Seymour haven't had any fresh snow in over 48 hours, while Grouse Mountain recorded 1 cm overnight.

But, do not despair, Environment Canada has forecast snow for the local mountains and at sea level in Metro Vancouver Saturday night.

Armel Castellan, warning preparedness meteorologist at Environment and Climate Change Canada, says all the right ingredients are coming together for a snow event on Saturday evening that’s expected to continue through to Sunday.

“This event for Cypress, Seymour, and Grouse is very likely to bring some snow,” he said.

“It'll be a great little top-up, whether it's five or 10 centimetres, or quite a bit more, even double that still remains to be seen.

“We couldn't honestly tell you now, what it is exactly going to deliver, but all of the ingredients are for sure there that the local mountains will see some snow Saturday night into Sunday.”

On top of Saturday and Sunday’s snow predictions, the Metro Vancouver forecast also calls for a 30 per cent chance of flurries on Monday night with a daytime top of 4°C and a low of 0°C at night.

Plus, Castellan also said to stay tuned for a possibility of more snow on Tuesday and Wednesday at elevation and sea level, with a 60 per cent chance of flurries or rain showers in the forecast. Temperatures will hover between 4-5°C during the day and drop to a chilly 2-0°C at night over the week.

Despite the lack of snow during the past week, Castellan said snowfall for the local mountains this season was so far above average. To date this season, Grouse has had a total of 489 cm, Seymour has recorded 505.5 cm and Cypress Resort has had 415 cm.

“We're well above average right now, which is not surprising, because it was very stormy for the better part of five weeks,” he said. “Between the end of the first week of December, all the way through to just last week was just one storm after the other, and for the local mountains, they're high enough that most of that fell as snow.”

While the mountains have had a fair amount of snow, he said exceedingly warm temperatures in December had made it difficult for snowfall to reach sea level.

“Generally speaking, the snow has been very active at elevation but for us down at sea level, for most of the North Shore, it's been very wet and not the amount of snow that we have typically seen over the three decades that we kind of average back to from 1981 through 2010.

“It's been a slow winter for sea level, there's no doubt about that.”

He said the low snowfall over the past week on the local mountains coincided with the storms ending.

“We've kind of turned off the tap,” he said. “There's been a little bit of rain, but the snow was hinging on storms and if you turn off the storm track, then you're not going to get very much in the way of snow.

“It's that magical mix between having storms still populating the Coast but also being cold enough.”

Castellan said this weekend's snow event was the result of the “La Niña pattern starting to take hold.”

“What we need to happen is that the high pressure system anchors itself further west underneath or south of the Aleutian Islands of Alaska and for the trough [low pressure] to be to the east of that, and that gives us that northwesterly flow.

“For the longest time, we've had the trough be too close to us, and it's given us a southwesterly flow. So, finally, we're going to make some of that cold air coming south."

He said the cold air coming south wasn't a true Arctic air mass, so there wouldn't be record low temperatures over the next week.

"We have just enough cold that when you clash that cold with a Pacific system coming down the coast from the Gulf of Alaska, then you get that mix where finally you can get some snow and the potential for snow at sea level is significantly ramped up compared to anything that comes from the southwest.”

While non-essential travel advisories are still in place, Castellan also reminded residents to be prepared for snowy conditions on British Columbia highway passes, including the Coquihalla, Sea to Sky, Okanagan Connector and the Malahat on Vancouver Island.

Winter tires or chains are required on most routes in B.C. from Oct. 1 to April 30. These routes are marked with regulatory signs posted on highways throughout the province.

Drivers are required to have winter tires when travelling on highways in Northern B.C., the Southern Interior, the South Coast, and areas of Vancouver Island.

The province has designated winter tire and chain routes drivers can check before venturing out.

Winter or M+S rated tires are mandatory for vehicles on Cypress Bowl Road and the road to Mount Seymour at all times from Oct. 1 to March 31. Winter rated tires are strongly recommended during snowfall events.