This story has been amended since first posting to remove information since redacted from the BCFIRB ruling.
Oct 23, 2019 10:52 AM By: Brent Richter 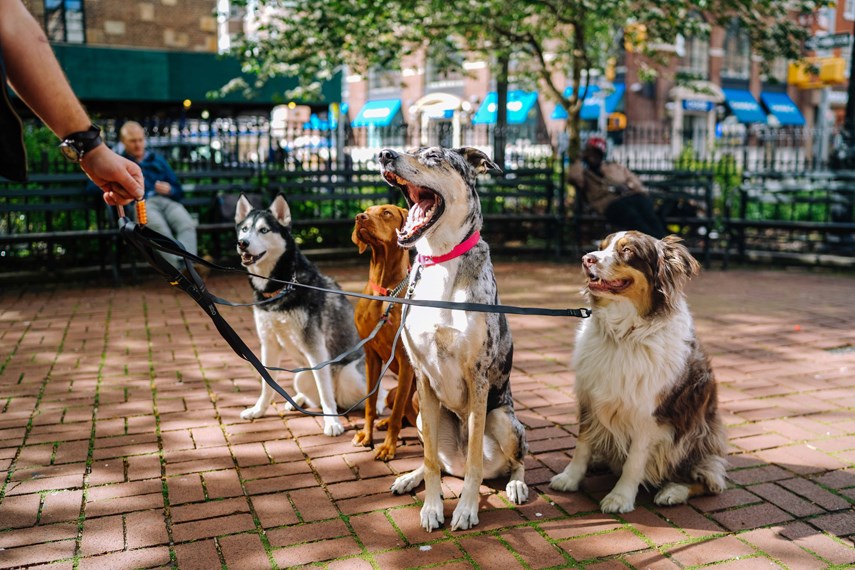 This story has been amended since first posting to remove information since redacted from the BCFIRB ruling.

A professional dog walker and trainer who frequently walks the North Shore trails has had his own pets seized by the BC SPCA after they were found to be in distress, and lost his appeal to have them returned.

On Aug. 3, the SPCA seized Mieka, Duphous, Carebear, and Hazel, from the home of Glen Affenzeller (who also goes by the surname Zeller), owner of Vancouver-based Dogtalk Ventures Ltd. The business specializes in training dogs with aggression and behavioural problems.

The seizure stemmed from an incident captured on video two days earlier when Affenzeller was walking six dogs tethered together, according to a written ruling from the BC Farm Industry Review Board, the independent tribunal that has jurisdiction over animal seizure cases. Two dogs in a fenced yard began barking at the group. Dawson, one of the dogs in Affenzeller’s care, barked back and later bit down on Carebear’s ear, partially severing it. Over the course of 37 seconds, Affenzeller “picked up (Dawson) by the head, slammed it onto the concrete and punched it closed fisted multiple times,” the ruling stated.

Two days after the incident, the SPCA investigator returned with Vancouver Police Department officers and an animal behaviour scientist and seized six dogs, two of which belonged to Affenzeller’s clients. Those dogs were returned to their owners who were also directed not to let Affenzeller care for them again.

At his Sept. 30 hearing, Affenzeller told the tribunal the incident on the video was an exception to how he normally operates and that it was necessary to bring Dawson back under control. Affenzeller told the board that his clients were happy with how he dealt with their pets and several clients acted as character witnesses, saying Affenzeller’s “unorthodox” methods had helped get their dogs’ behavioural issues under control.

Affenzeller, who does not have any qualifications as a dog trainer, described his approach as integrating dogs into a pack with his own dogs to make them feel secure and to teach them to respect pack hierarchy in which he is the alpha, the ruling states. Affenzeller testified his training methods are both appropriate and successful, although he stated he understood how others could misconstrue them.

But after reviewing the video, Ian Welch, a veterinarian, testified dogs do not have the ability to understand punishment that stretches out over a long period. Any correction must be made within a one- to two-second timeline to be effective. Anything beyond three to five seconds is abuse, Welch testified.

Between 2006 and 2019, there were 42 separate complaints filed about Affenzeller’s treatment of dogs, the ruling notes, several of which Marcie Moriarty, chief prevention and enforcement officer for the BC SPCA, confirmed were from witnesses on North Shore trails. Among the complaints listed in the ruling: stepping on a dog’s foot, kicking a dog in the head and yelling at it, grabbing a dog by the lip, and throwing a dog to the ground before punching it four or five times in the face. Unlike the complaint involving Dawson though, none of those incidents were captured on video, Moriarty added.

The SPCA issued several notices to Affenzeller regarding the rough treatment of the dogs.

Another vet who examined all four of Affenzeller’s dogs noted signs of neglect and chronic diseases in them.

“I have no doubts that the animals I have examined today have been experiencing chronic ongoing pain and discomfort in addition to blatant neglect and untreated medical conditions. For the younger dogs especially, I do find it unusual for them to have accumulated as many scars as they did in their short lives,” Karen Harvey wrote in her report to the SPCA.

Affenzeller appealed to the tribunal asking for the return of his four dogs, but the panel rejected his request.

“In light of the complaint history, the video and the expert testimony, we agree that the incident was foreseeable and without a significant adjustment to his training techniques, similar incidents are likely to recur. As the panel found the appellant had no significant insight into the abusive nature of his training techniques, we have little confidence that he will be able to change his practices. His techniques appear to be a deeply held philosophy which does not appear to share support among experts in dog behaviour,” the ruling stated.

In addition to denying Affenzeller’s request for the return of his dogs, the tribunal held him liable for the full costs the SPCA took on in caring for Mieka, Duphous, Carebear, and Hazel - $7,401.86.

Under the Prevention of Cruelty to Animals Act, the BC SPCA has custody of the dogs. Two have since been adopted out and two are still available.

Moriarty said she will be requesting the Crown lay animal cruelty charges against Affenzeller.