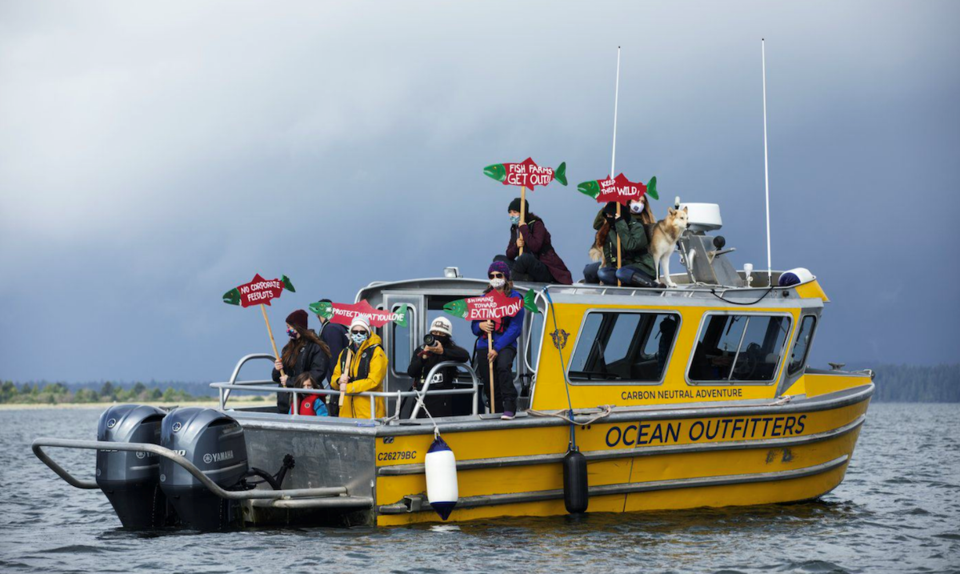 Protestors aboard an Ocean Outfitters' boat hold up signs that read, "protect what you love," and "swimming toward extinction," during a wild salmon flotilla in the Tofino harbour, on Sept, 26, 2020.Melissa Renwick/Local Journalism Initiative

The BC Salmon Farmers Association is challenging the discussions at an anti-salmon farm press conference in North Vancouver on Sept. 22.

A broad coalition of First Nations leaders, wilderness tourism operators, environmental NGOs, and commercial and sport fishing organizations gathered to demand the federal government fulfill a conditional recommendation of the Cohen Commission to immediately remove open-net salmon farms from the Discovery Islands, and follow through on the promise to abolish all others from B.C. waters by 2025.

In an e-mail to following its story on that event, BCSFA spokesperson Shawn Hall said claims by what he calls “activists” have again been taken at face value without scientific or factual merit.

“In fact, the commission’s final report stated ‘… data presented during this inquiry did not show that salmon farms were having a significant negative impact on Fraser River sockeye.’

“Furthermore, the report mentioned that marine conditions (warm sea temperatures, low salinity, poor zooplankton abundance) as likely to be the primary factors. It did call for more science, and the removal of salmon farms in the Discovery Island area if the DFO cannot be confident that salmon farms are causing more than minimal risk to wild salmon populations.

“A lot of science has been done since then, the bulk of it finding that responsible salmon farming does not harm wild salmon populations.

“We’re confident that bar has been met.”

The $37-million Cohen Commission inquiry was launched in response to the sharp decline of Fraser River sockeye in 2009. The final report, released in 2012, listed 75 recommendations for changes in government policies and practices aimed at helping sockeye runs recover.

The major issue surrounding salmon farms on B.C.’s west coast is the accuracy of sea lice counts, and whether salmon farms are the reason for dramatically falling wild salmon stocks. High concentrations of sea lice on salmon smolts are damaging to their health.

“Sea lice levels in some areas of the ocean are indeed higher than average this year. They are naturally occurring parasites, and their levels vary from year-to-year with ocean conditions (they like warm, salty water) and how many lice adult fish bring in from the open ocean when returning to spawning grounds.

“Higher than average sea lice levels have been reported in areas both with and without salmon farms — one of the highest levels was found in the Broughton area, where salmon farms have been removed. Our fish go into the ocean (within pens) from land-based hatcheries without sea lice and pick them up. Our responsibility is to keep levels low so they don’t transfer back to wild salmon.”

While wild fishers have alleged that farmed salmon are the cause of the increase in sea lice and the drop in wild salmon populations, Hall said statements made at this week’s conference are without merit.

“The claim that wild fishers are seeing ‘unprecedented’ levels of sea lice on juvenile salmon this year … wild fishers don’t catch smolts (at least not legally), so how would they be seeing that?”

Hall pointed to a study by Mainstream Biological Services, contracted by Cermaq Canada, which sampled sea lice levels on juvenile salmon before and after passing salmon farms.

“The findings are that the number of sea lice on juvenile salmon were about the same before and after they swam past a farm, and also that most juvenile salmon had no lice on them.

“It found, for example, that 80.4 per cent of chum salmon sampled had zero sea lice before swimming past farms, 83.0 per cent had zero lice after.”

Hall maintained that media reports and anti-salmon farming proponents do not represent the importance of the salmon farming industry in B.C.

“[The report] ignores that 7,000 people now work in salmon farming, so the industry has become an economic lifeline in many communities,” Hall stated.

Quinn Bender is a Local Journalism Initiative reporter with the Prince Rupert Northern View, where this story first appeared.