Horgan says North Delta while a different community is also the same in many ways to Surrey
Mar 2, 2021 5:53 PM By: Sandor Gyarmati 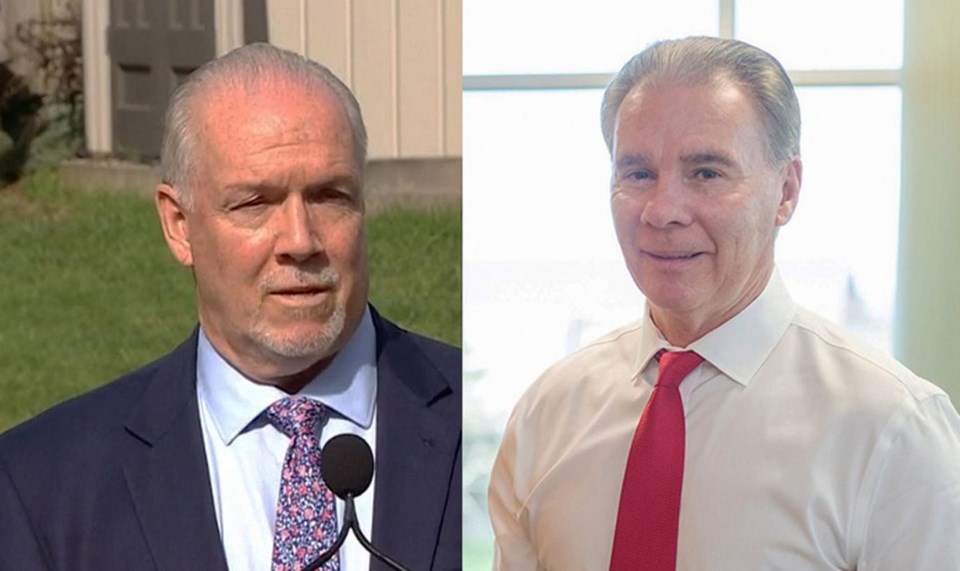 Premier John Horgan (left) in the legislature suggested North Deltans could attend a Surrey location to get a COVID-19 vaccine. Saying his city is willing to do whatever is needed, Delta Mayor George Harvie wrote to government asking for a vaccine centre in North Delta. Delta Optimist file

A COVID-19 vaccine clinic is coming to South Delta as the province begins the monumental task of trying to get all British Columbians immunized, however, it looks like residents of North Delta will have to travel elsewhere to get their shot.

Premier John Horgan, in the B.C. Legislature, was asked by B.C. Liberal MLA and interim leader Shirley Bond Tuesday morning, why there appears to be no plan to set up a COVID-19 vaccine clinic in the North Delta community.

Noting the vaccine rollout is a complex situation, the premier’s response was for Bond to get a "geography lesson."

“With respect to the particular request by the mayor of Delta, we'll take that under consideration. But the member will also know that if you live in North Delta, you are right beside Surrey. It is a different community, but it is the same community for commerce…” Horgan said, “…for shopping, for social interactions. Again….Perhaps a geography lesson would be in order here.”

North Delta has more than half of the total population of the City of Delta.

In a letter this week to Fraser Health Authority president and CEO Dr. Victoria Lee, Mayor George Harvie raised concern that a North Delta vaccine site may not be considered, saying a vaccination site for the whole community is essential.

“North Delta represents the largest percentage of Delta’s population. Staff have previously been instructed to support vaccination clinics in whatever means possible. This includes utilizing the City owned and operated senior’s buses to transport any Delta residents to and from vaccination clinics and provide interpreters to overcome any language barriers. Additionally, we are committed to working with our Fire Department personnel, trained to EMR level to assist in vaccination rollout as needed," wrote Harvie.

“The City of Delta is not well served by transit and we must ensure that every opportunity is available locally for residents. Having these systems in place will ensure the highest level of vaccination participation, especially for Delta’s most vulnerable population,” Harvie added.

Harvie also noted that while the gymnasium at the North Delta Recreation Centre may not fit the Fraser Health’s criteria, other options they would like to discuss include the arenas at the Sungod and North Delta recreation centres as well as the Kennedy Seniors facility.

Delta South MLA Ian Paton told the Optimist it’s the premier who needs a geography lesson, noting North Delta residents will end up having to go some distance within Surrey to get the vaccine, a situation all the more difficult for the elderly who don’t drive.

“It’s kind of goofy. He (Horgan) said North Delta is basically no different than Surrey, saying they go there to do their shopping and things like that. North Delta has a big population with around 60,000 people and Delta Mayor George Harvie in his letter said they’d give them whatever they want to set up a place in North Delta,” Paton said.

Paton also noted the government promised the day earlier that the population of the Hope would not need to travel to get the vaccine.

However, Delta North New Democrat MLA Ravi Kahlon, saying nothing has been finalized and they’re still working on sites for mass vaccination clinics, adding the first priority of government is to ensure vulnerable elderly in the first phase of vaccinations will have easy access to the vaccine.

“This will be the largest vaccination rollout in B.C.’s history and the rest of the clinics have not been landed yet. I know South Delta will have one and my hope is that it’s close to residents in my community. But, at the same time, I know we need patience and we need to work together to make sure this is a seamless process. So, the last thing we need is people fighting over territory or jurisdiction,” said Kahlon.

As far as the premier’s comment’s, Kahlon added, “We want to make sure the people will have a safe way to get the vaccine. Even if it’s on Scott Road on the Surrey side, people cross that line all the time. We want to make sure whatever clinics come, they are close and as accessible my community, in particular, and I’m confident the health authority understands that and we will continue to work with them on it.”

According to Fraser Health, appointment locations for people in Phase 2 of the rollout will be confirmed at the time people book their appointments.

People will be able to choose an appointment location that works for them, the health region notes, adding this could be somewhere close to their home or close to their place work.

Fraser Health also notes full list of mass clinic locations for Phase 3 will be shared publicly at a later date.