UPDATED: BC Ferries cancels Route 3 summer trial, saying it was too ‘divisive’ 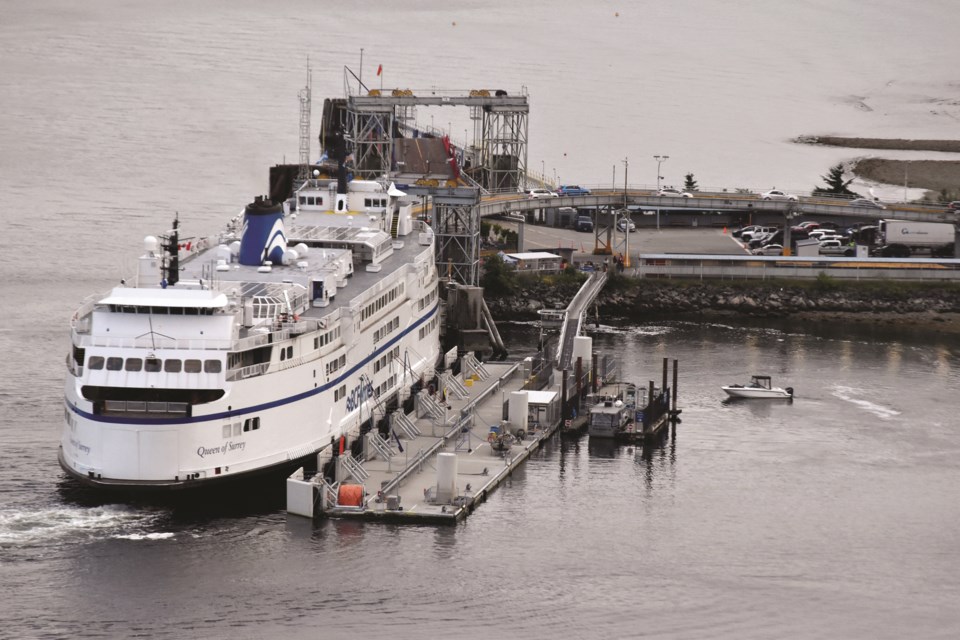 BC Ferries CEO Mark Collins said it became evident “that the issues are complex and more community conversation is needed before change can be considered.”Sophie Woodrooffe

BC Ferries has cancelled plans for a summer trial on the Langdale to Horseshoe Bay route that would have increased the route’s reservation capacity to 95 per cent and charged one-way vehicle fare at the Langdale terminal.

The news was tweeted Friday by Powell River-Sunshine Coast MLA Nicholas Simons, about two minutes before BC Ferries CEO Mark Collins was scheduled to address the public at a noon Sechelt and District Chamber of Commerce meeting.

Collins, speaking at the meeting, announced the cancellation, saying the feedback from the community was too “divisive” to proceed.

Collins went on to explain why BC Ferries brought forward the trial in the first place. He defended BC Ferries’ plans for Route 3, saying the 3.5-month trial was a test to see if the changes might work. Collins said there were six main concerns BC Ferries saw from Sunshine Coast residents during public consultations in 2020, the main one being travel certainty.

BC Ferries’ routes 9, 10, 11 and 28 – servicing Tsawwassen to the Southern Gulf Islands, Port Hardy to Prince Rupert, Prince Rupert to Haida Gwaii, and summer service for Bella Coola to Port Hardy, respectively – already have 100 per cent reservation capacity, Collins said. He said the primary concern for Route 3 was that the proposed 95 per cent reservation capacity would have sold out sailings, but he denied that the ship would have always been sold out, adding that doesn’t happen on the four routes with this percentage already in place.

He noted the majority of the concerns surrounded situations that he said are not common. The Experience Card uses older technology that doesn’t work with some systems, Collins said, in response to why the cards were not included in the trial.

The trial, he said, intended to offer deals to customers to incentivize change in travel behaviours, address community concerns and create travel certainty. BC Ferries also wanted to disincentivize no-shows, so that reservation space wouldn’t be lost. A second ship is not coming to Route 3 for at least five years, he added, because of the required capital, time of procurement and contract needed. Regarding medical-related travel, Collins said he encouraged people to review the details of the trial.

As for catering to tourists, he said the trial was designed with both residents and tourists in mind. Tourists, he said, often travel at off-peak times and generally do not compete with commuting residents or medical travel.

“It is not one or the other. The proposal was very carefully crafted to benefit the Sunshine Coast as a whole,” Collins said.

In the question-and-answer period, chamber board chair John Henderson said the chamber had not been aware before the meeting that the trial was cancelled. More than 200 people joined the Zoom meeting, which will be made publicly available by the chamber.

The April 30 presentation for the chamber came the week after the public learned of the trial, when it was presented to and endorsed by the Sunshine Coast Regional District (SCRD). The District of Sechelt and Town of Gibsons had both seen the presentation in previous in-camera meetings that were closed to the public by request of BC Ferries.

During the chamber’s meeting, Sechelt Mayor Darnelda Siegers expressed her disappointment with the latest turn of events with Route 3.

“I’m disappointed that you’re going to forgo the trial this season. Yes, there was a lot of feedback this last week and a lot of it was negative … but the information that you presented today in your presentation I don’t believe was provided to the greater community and it was not put out in advance of the announcement that the trial was moving forward,” Siegers said.

“So I believe that the feedback we received was actually a result of the lack of adequate communication that BC Ferries did prior to announcing the trial.”

She also said the local governments were told the fare would remain the same as the current Experience Card rate and reservations would be free. The fares proposed for the trial were made available on the BC Ferries website on April 28, nearly a week after the SCRD endorsed the trial.

Collins said the company had to find the balance in the fares to average it out and maintain the financials of the route. Earlier in the presentation, Collins said the trial would not have increased revenue for BC Ferries but actually reduced its revenue on Route 3.

The communication to the public was supposed to start on April 26, he said. The presentation to SCRD on April 22 was not intended to be the announcement of the Route 3 trial.

“Unfortunately, the conversation became divisive immediately,” Collins said. “We needed the endorsement of the elected leadership before we could talk to their population.”

The SCRD released a statement on April 23 – one day after its endorsement of the trial – disputing that BC Ferries needed the board’s endorsement to go forward.

“We had hoped that the conversation would remain open and a reasoned discussion could take place as we rolled out the information starting Monday,” Collins said. “And I’ll say we were surprised by the degree of divisiveness that appeared immediately.”

In response to a question as to why BC Ferries cancelled the trial instead of compromising, Collins said the conversation has “not been pleasant” and BC Ferries has decided to take the pressure off by removing the trial.

Siegers added she believes it’s too soon to cancel the trial, and suggested BC Ferries continues consultation and providing information to the community.

“We, too, are disappointed not to be proceeding. This trial – if the community gets to a place where they say they would like to try some or all of these elements, we can always reconstitute this in the future,” Collins said. “No doors are being slammed shut here. It’s just we feel that the conversation at present is too divisive to continue. But if that’s to change, you’ll find BC Ferries a willing partner to engage with the Sunshine Coast.”

After the announcement, MLA Nicholas Simons told Coast Reporter he had received about 100 phone calls and close to 200 emails concerning the Route 3 trial.

He learned the trial was cancelled about an hour before the chamber meeting. Simons said he had been in contact with BC Ferries, ferry advisory committee members, local government officials, and the Ministry of Transportation and Infrastructure.

“I just wanted to make sure the ministry also knew about the feedback I had been receiving because that’s my responsibility,” Simons said. “I was very clear about the kind of feedback I was receiving.

“I think BC Ferries did the right thing by cancelling it and I think that they learned something about how to communicate better, even though their statement was that this was the result of that consultation,” he said.

“The consultation didn’t result in a reflection of people’s opinions.”

As for what Route 3 needs, Simons said his preference is for another vessel to be added to the route.

“But until then, there has to be accommodation for the issues that have been raised,” he said.

Diana Mumford, chair of the Southern Sunshine Coast Ferries Advisory Committee, told Coast Reporter, “The community was so angry, their voices needed to be heard. And I think BC Ferries really needs to look at their engagement commitment on their website and reaffirm that.”

Cancelling the trial was the right decision, Mumford said, because introducing significant changes during a pandemic was “a problem” and the public was not open to changing the route service at this time. Marginalized people, medical travellers and those with economic problems had concerns about the trial that Mumford said needed to be addressed in advance.

“I think the community was so angry, that no matter how reasoned [BC Ferries’] answers were about how they were going to handle pieces, everybody was beyond listening to that.

“Needless to say, I was quite delighted,” Mumford said of the decision.

– with files from Sophie Woodrooffe