A plan to start issuing special veterans licence plates to retired RCMP members is raising the ire of the group that started the program. Retired Lt.-Col. Archie Steacy and the B.C.
Aug 2, 2018 4:18 PM By: Brent Richter 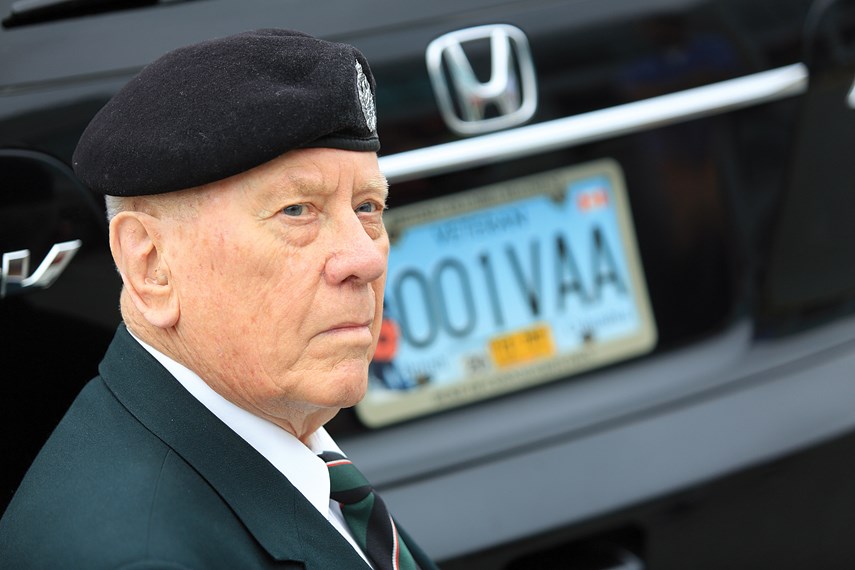 A plan to start issuing special veterans licence plates to retired RCMP members is raising the ire of the group that started the program.

“It was probably less than five minutes before he said ‘We’re going to do it,’ Steacy said.

At the time, there were around 90,000 Canadian or Allied veterans in B.C.

The province delegated the administration of the program to the Commemorative Association, which designed the plates and set the eligibility criteria. For that, they opted to use the definition of veteran used by the Department of National Defence and Veterans Affairs Canada, which is anyone who has been honourably discharged or is a currently serving member of the Canadian Armed Forces or with an allied force.

But Steacy, an Upper Lonsdale resident, said he was shocked to learn last month that the Royal Canadian Legion’s B.C./Yukon Command was lobbying the province to instead use the Legion’s definition, which includes RCMP members.

“It’s really simple. Military veterans are soldiers, sailors, airmen, and merchant navy guys during the war. The RCMP are policemen and they don’t do soldierly things. That’s why they’re not veterans. This was established for military service, period. Not police service,” Steacy said.

Changing the definition of veteran would water down the importance of what the plates represent, said Sharel Duplessis, the former regional director of Veterans Affairs’ Canada Remembers program and current board member with the commemorative association.

“It’s revered. For a veteran, this has symbolism. When a military veteran has been called to action, they see things that are unimaginable to us, the common man. This small public recognition has great meaning to them because it says to them ‘The public will remember what we did,’” Duplessis said. “This has very much, almost a sacred symbolism.”

Duplessis characterized the legion as interloping with another non-profit’s work in order to boost their own falling membership.

“Basically, it’s a membership drive. ‘Join the legion and get your licence plate,’” she said.

But David Whittier, executive director of the legion’s B.C./Yukon Command, said his group is simply trying to get standard eligibility criteria across the country, as some provinces allow RCMP members to have veterans plates and others do not.

“That’s a concern for us and the legion’s position is that we would like to see the legion definition of veteran be used as the criteria for deciding whether or not to issue veterans plates,” he said. “The RMCP, we feel, deserve consideration because of their long history of service to this nation as an organization and as individuals – way back to the days of the Northwest Mounted Police,” he said.

Whittier rejected the notion the change was just a tactic to boost his organization’s membership.

“Granted, we are happy to take more members. … We would certainly love to see more RCMP join, but we’re doing this because we think it’s the right thing to do,” he said.

Steacy and his organization tried numerous times to set up a meeting with Attorney General David Eby to make their concerns heard but were rebuffed for weeks. It was only after the province’s public consultation survey had been online for a week that the founder and the administrators of the veteran licence plate program were able to speak with the minister responsible.

Eby did not grant an interview, but his office sent a statement.

“I recognize that veteran licence plates are an important and meaningful issue to veterans and their families. At the same time, the B.C. government has received requests to expand the eligibility criteria to allow for other groups of drivers to be able to receive a veteran licence plate, most recently from the Royal Canadian Legion asking us to consider including RCMP officers,” said Eby in a statement. “We want to hear how British Columbians feel about this topic before our government makes any decisions. We consulted with stakeholders, including the B.C. Veterans Commemorative Association, before launching the engagement.”

Steacy was given “frequent and ongoing access to senior ministry executives” to discuss the matter before the survey launched, Eby added.

Steacy said he wanted to make it clear that keeping the veterans plates for military members only isn’t meant to be a slight against the mounted police. The commemorative association is fully supportive of the province creating a new class of special plates for first responders.

“Our organization and all our members, we have the highest respect for the RCMP as a national police force and the things that they do,” he said.

No one from the RCMP’s B.C.-based E Division responded to a request for comment.