In an effort to keep bullied kids from becoming another front-page headline, a new video made in North Vancouver aims to raise awareness about the ramifications of unchecked social media use by today's youth.
Jun 25, 2014 12:00 AM By: Stefania Seccia 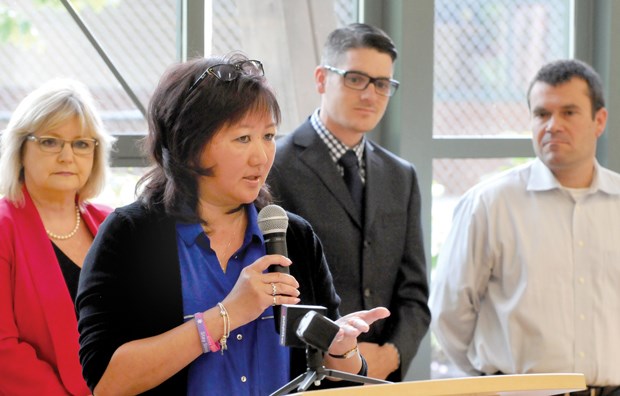 In an effort to keep bullied kids from becoming another front-page headline, a new video made in North Vancouver aims to raise awareness about the ramifications of unchecked social media use by today's youth.

Nearly two years following Amanda Todd's suicide, her mother Carol Todd was in North Vancouver on Friday to speak about a new video to inform people about the real-life implications of the online world. Jane Thornthwaite, North Vancouver-Seymour MLA, and social media expert Jesse Miller made the video with the help of students from Sherwood Park elementary.

"Amanda was subjected to a lot of abuse both online and offline," Todd said.

"It's impacted how we look at online safety and unfortunately, I've been thrown into the role (of) going out and telling people about my daughter's story."

Todd likened the digital world to that of being on a playground, and in both scenarios the responsibility is on parents and their children to protect themselves from the possible dangers.

"It's a slow and steady fight," she told the North Shore News. "This video will support these teens and kids now in how they look at their media and if we can get something to the younger kids, even the preschool toddler, we don't have to teach them about social media. We can teach them about kindness and respect, and how to respect others and their own body."

While it will take time to see the impact these initiatives will have, Todd said it's only a matter of time. "What I see a shift in is kids are more aware," she noted. "And if they see something happening they're more apt to report it to someone. If they see a friend in need, they're more apt to also get their friend help."

The video, featuring Sherwood Park students talking about social media and listening to Miller on the consequences of posting pictures online with too much information, was made after Thornthwaite wanted to learn more about what her kids were up to digitally. "This connection has greatly changed our lives and how we interact with each other, but

there's an unfortunate byproduct of this hyperconnected virtual world," she said. "Some feel perhaps anonymity empowers them to say things they wouldn't normally say in person."

When Thornthwaite's children showed her the Snapchat app she saw an image being sent to a friend and then disappearing several seconds later. "Unfortunately, that's not the case," she added. "The Internet has no delete button and what you say or do online stays forever."

Miller echoed Thornthwaite's comments. Their video is meant to show that while kids today excel at navigating the online world, parents still play a crucial rule in guiding that navigation. He said it's important parents talk to their kids about what they're doing virtually and how it can affect their future.

"When it comes down to social media, we've now given children a stage to stand on where other people across the planet can affirm what they look like in a bathroom mirror," he said.

The video may be shared as an educational piece across school districts in B.C.