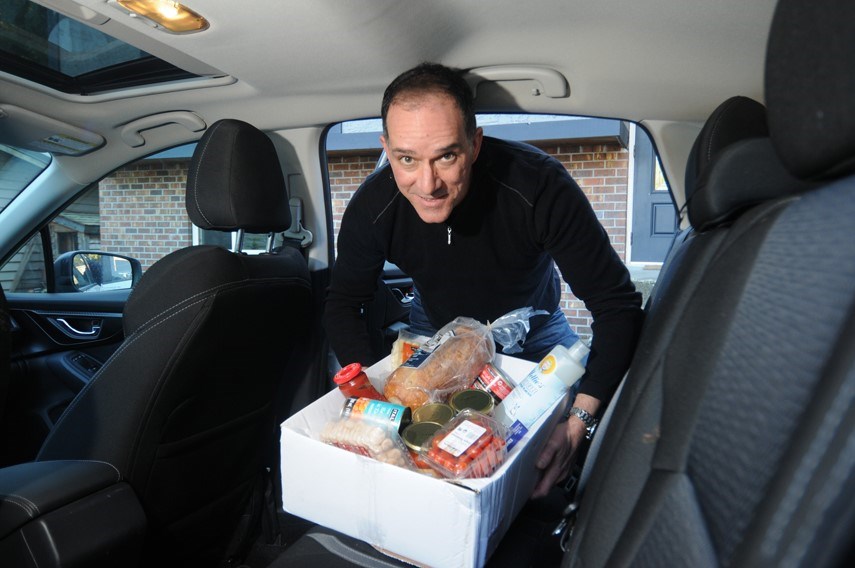 North Vancouver's Greg Robins loads groceries for a neighbour. An offer Robins made on Twitter to help vulnerable neighbours during the coronavirus scare went viral, prompting many others to make similar offerings in locations across the globe. photo Mike Wakefield, North Shore News

If you need something picked up or dropped off but can’t or shouldn’t do it yourself – there may be a neighbour waiting to help.

Lynn Valley resident Greg Robins made an open-ended offer of service for anyone who is immunocompromised or otherwise vulnerable to COVID-19 on Twitter recently.

Robins, who can be reached via email at therobins@gmail.com, has offered to grab groceries or to share some of his own supplies with those who need it.

That offer was immediately picked up by community-minded people across the North Shore and beyond. The tweet was liked more than 350 times in just a few days and spawned similar offers from residents near Park Royal, Edgemont, across the water in Kitsilano and even as far away as San Diego, Calif.

Anybody in the San Diego area, hit me up. For errands other than babysitting, too. https://t.co/HQ2RluR9th

“It’s been really gratifying to see how many other people are willing to jump in and pitch in,” he said, noting that his call to action was even picked up by a fellow Good Samaritan in South America.

“Leadership really starts in the community,” Robins said. “We are all so focused on what’s going on in Italy and America and other parts of the world. It’s grounding and quite satisfying to ask ourselves a bigger question which is: what can we do right here, right now, at home?”

In West Vancouver, longtime volunteer Jenny Hulten Hippel found herself wondering what she could do to help.

“I just decided, in the two minutes I had on Friday, to just throw up a group and see what happened,” she explained.

Now with more than 900 members, the Facebook group West Vancouver Neighbours has become an online hub for help and information.

The group exists primarily to assist elderly people, those in self-quarantine and immunosuppressed West Vancouverites, as well as folks in Lions Bay and on Bowen Island, Hippel said.

Due to the pace at which membership ballooned, Hippel and her volunteer moderators are trying to ensure only people with West Vancouver connections join the group.

“There’s always somebody profiting off the backs of others or somebody with some ill intent, I mean, we see the people hoarding in the grocery stores,” she said.

The group also established parameters regarding online etiquette as well as asking members to cite well-sourced facts rather than opinions.

“One thread got out of hand and so we just shut that down,” she said. “Nobody needs personal attacks during this time.”

Beyond more urgent needs, the group is meant to be a source for human contact during a period of isolation.

“I think having a group like this brings down the anxiety,” Hippel said. “People connect.”

For anyone with temporary or permanent health issues, Meals on Wheels is also continuing to drop off food during the crisis, thanks in part to an influx of volunteer drivers.

Ten residents called Meals on Wheels this week, offering to make deliveries during the outbreak, said Meals on Wheels co-ordinator Troy Steyn. The society, however, has altered protocols to limit contact with customers.

“I’ve got to look after clients as well as my volunteers,” Steyn said.

Meals on Wheels offers help to seniors who have difficulty preparing food as well as well as new parents who are too busy or too exhausted to prepare nutritious meals.

“A lot of people think that we would shut down but we can’t, we’ve got clients [for whom] we’re their only source of food,” Steyn said.

For Robins, only one Lynn Valley resident has taken him up on his offer: a neighbour who recently underwent open-heart surgery.

“I’m sure I’ll be doing some chores for him very soon,” he said.

While he’s seen images of people “kind of losing their minds,” as they fight over supplies, he’s found customers in small North Vancouver shops to be civilized.

“These independent stores are really a place of refuge,” he said. “There’s plenty of food for everyone and nobody’s going crazy.”

Helping others during this difficult time can also benefit your own mental health, he said.