After 95 years in Dundarave, heritage house is about to be barged to new home

A developer is working with the Nickel Brothers to save the house at 2367 Marine Drive in West Vancouver from demolition
Sep 29, 2020 6:30 PM By: Martha Perkins 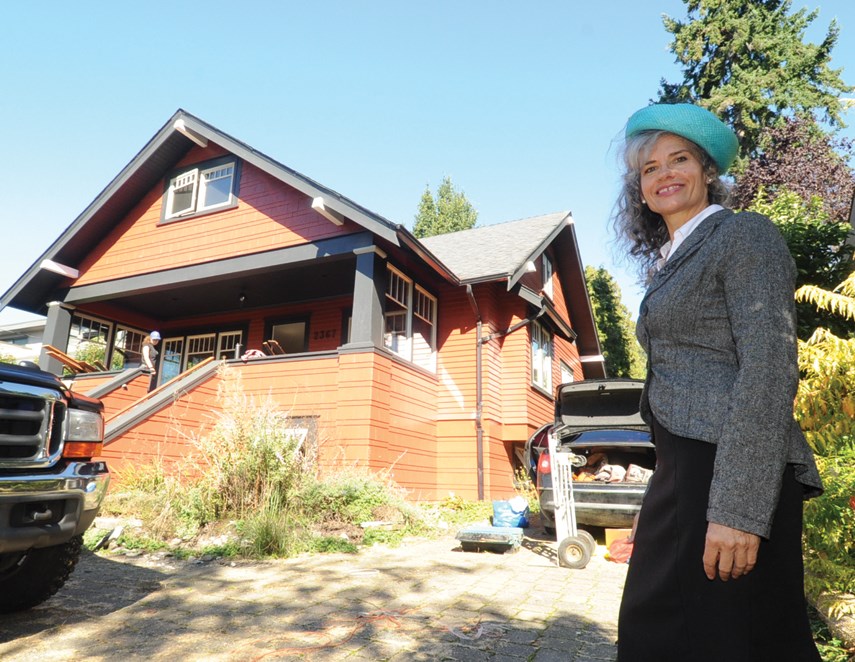 Dressed in period costume Ronel Dreyer of Nickel Brothers house moving stands in front of 2367 Marine Drive in West Vancouver. The heritage house, which she's named Queen Marine, will be barged to a location north of Vancouver island.Mike Wakefield

The old dame at 2367 Marine Drive will not go quietly into that good night.

In fact, onlookers might hear the heritage house mutter a few moans and groans when she’s is lifted onto a truck to begin her 300-km journey to her new home.

“The pivotal moment will be when they come in and the hydraulics lift the house off the foundation on which she has sat for 95 years,” says Ronel Dreyer, who works on home recycling and sales for the Nickel Brothers, which is in charge of relocating the house. “It actually makes an eerie sound. It's kind of a creaky, groaning sound. It isn't that loud but everyone close by can usually hear it.”

Dreyer has bestowed the name Queen Marine on the house because of its quietly dignified poise on a street that is now a lot busier than it was in when the house was built in 1925.

Today the house is surrounded by modern duplexes, a block east of a vibrant block of stores and restaurants that manage to help Dundarave retain its small-town feel. One of those restaurants is housed in one of the few neighbourhood buildings older than Queen Marine — The Red Lion.

The house is not formally on a heritage list but when a developer came up with plans to replace it with a duplex, the developer turned to Nickel Brothers to see if the house could be saved. Nickel Brothers has, in part, built its reputation on preventing old houses from being demolished. Just this past March, the company moved Copper Cottage, a house built in 1908, three blocks from its original home in North Vancouver.

The developer did not seek compensation for the value of the house. Instead, Nickel Brothers advertised Marine Queen for sale for $144,000 — its cost of preparing the house, lifting it, intact, from its foundations and moving it (although the final sale price varies depending on the location of its new home.) It found a buyer who owns property on a northern island near Port McNeil.

“This house is really beautifully updated in the heritage style but with more modern, custom-made features,” Dreyer says. “We have literally hundreds of buyers that desire that kind of a heritage house.”

What particularly struck her when she toured the house was a big, white rock in the basement. The original builders obviously didn’t have the resources to remove it so they simply built around it.

Dreyer gives a lot of credit to the developer for wanting to save the house.

“Sometimes people look at developers in a very negative light and I fully can appreciate that,” she says. “But, in this case, the developer has been proactive in saving this house and even though we are working towards a very, very tight deadline, the developers have been gracious. They've been great to work with. It's not always true that developers would just come and demolish something.”

She also praises the work of the District of West Vancouver staff and council, as well as local heritage societies for expediting what is a very complicated process.

“Although North Shore Heritage Society prefers a home remains in place, we support relocating it in order to preserve the house for others to see and for environmental reasons,” the organization says on its website. In 2008, the society gave the owners an award for the way they honoured the home’s heritage during the renovation process.

Dreyer says, “We’ve felt a lot of support from a lot of entities in West Vancouver, as well as the public. People walk by and say, ‘Yes, save the house.’ It’s a loss for West Vancouver but the good thing is that we’re saving her. She’ll live on.”

When it comes to moving the house, the first challenge is its shape. Only 1,513 sq. ft., it’s square and tall. The dormered roof is 20 feet high and it will be placed on dollies on a truck bed another four feet from the ground. To move easily under hydro lines and traffic light fixtures, the house would need to be only 16 feet.

The Marine Drive location is both a blessing and a curse. It’s a blessing because Queen Marine won’t have to be moved far to be trucked onto a barge at the bottom of either 13th, 14th or 15th Street. It’s a curse because there are a lot of light fixtures and lines that will have to be moved to accommodate the truck when it’s on the move. (A route has not yet been finalized.) Because the house is so wide, traffic will have to be diverted.

Given all the disruptions, the move will be done at night. Perhaps it’s not the best time for watching such an undertaking but it will be a pretty impressive undertaking nonetheless.

The deadline for removing the house from the property is October 15.

Dreyer knows it will be a poignant moment when the Marine Queen sighs as she’s lifted from the ground. Over the weeks she’s spent helping to co-ordinate the move, she’s developed an affinity for the house. “You’ve sat here for 95 years and now we are taking you somewhere else.”