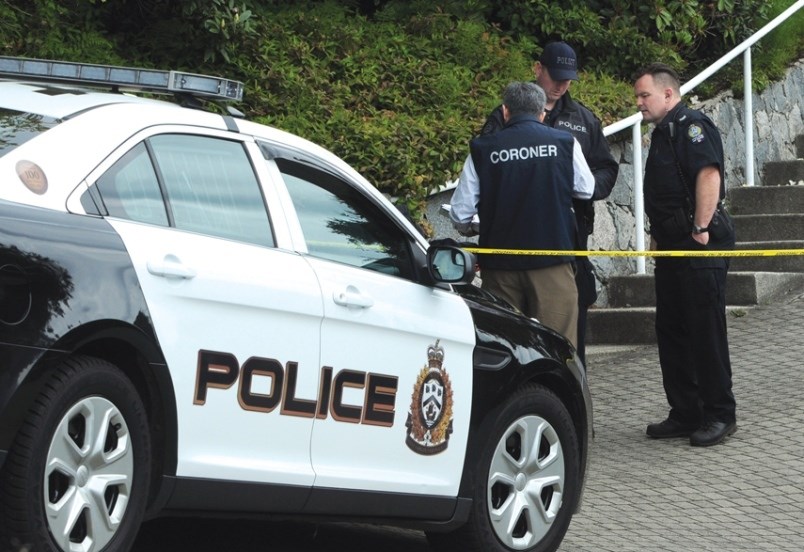 A West Vancouver man accused of murdering and chopping up his relative’s body in a British Properties mansion cried in a B.C. Supreme courtroom Tuesday as he told a judge how he and the victim, Gang Yuan, struggled over a gun in the driveway before the gun went off, killing Yuan.

“Gang Yuan’s action and my action were woven together,” Li Zhao, 58, told the judge. “It was Gang Yuan’s pulling at the gun that led me to fire the gun.”

Zhao was testifying in his own defence Tuesday afternoon through a Chinese translator as his murder trial, which began last year, resumed before B.C. Supreme Court Justice Terence Schultes, who is hearing the case without a jury.

Zhao is charged with the second-degree murder of 42-year-old Yuan, a wealthy businessman with connections in both China and Canada, who was a cousin of Zhao’s wife. Zhao is also charged with interfering with human remains for chopping up Yuan’s body into pieces with an electric saw in the mansion’s garage.

Zhao described Tuesday how the two men got into a fight on May 2, 2015 while at home in the British Properties house extended family members shared.

In a videotaped police statement heard earlier in the trial, Zhao said the two men were discussing a business plan to market specialized stands for hunting rifles and had taken out a rifle to demonstrate how the stands would work.

Zhao told the court Tuesday he became upset with Yuan after Yuan – whom Zhao said treated his girlfriends badly – suggested he would like to marry Zhao’s daughter as part of the business deal.

“You not only beat up and further abuse your girlfriends, you verbally abuse your own mother,” Zhao said he told Yuan. “I can never allow my daughter’s lifetime happiness to be ruined by you.”

Zhao said he told Yuan, “Even a rabbit will not eat the grass around his nest.”

Zhao said he meant “even a bad person who wants to do bad things” would not do them to a person he was close to.

Zhao said he told Yuan, “You’re so disgusting” and worse than “a dog.”

That’s when Yuan struck at him with a hammer, Zhao told the judge.

Zhao said he then panicked, and as he tried to dodge Yuan, “I missed my footing. My body shook. And then the first shot rang out.”

Zhao said he saw Yuan glaring at him. “He looked fierce, ferocious,” Zhao said through the translator. “I’ve never seen such a terrifying look in someone’s eyes.”

“I was so fearful. Instinctively I loaded the second bullet,” he said.

Zhao said Yuan was lying on the ground and reached over to grab at the gun as Zhao “dodged away.”

“The second shot rang out,” he said. “When the second shot was ringing out, the gun was being pulled by Gang Yuan. It was very confusing at times.”

“When the gun shots fired, it happened when Gang Yuan was attacking me,” he said. “It was during the process when I was dodging.”

Zhao said after the second shot, Yuan stopped moving, so he went over to see how badly he was injured.

“I saw that Gang Yuan’s eyes were still open and did not even blink,” Zhao said, crying on the witness stand. “He was also bleeding from the corner of his mouth. I knew then that he was already dead.”

While Zhao was standing over Yuan’s body in the driveway, Zhao’s wife and mother-in-law returned home from a walk and saw what had happened, screaming at him to call an ambulance.

Zhao yelled at the women to leave.

Zhao said he then dragged Yuan’s body into the garage and cleaned up the bloodstains.

Zhao said he thought he should move the body to “where I go hunting. But the body was too heavy for me to move. I would have to cut it into several pieces before I could move it.”

Zhao told the judge in the end he couldn’t remember his plan to move or hide the body parts. “I did not have any of the thoughts that a normal person would have.”

Zhao, who has shown little emotion during other parts of the trial, appeared animated and emotional while testifying this week.

A physically slender man dressed in a dark grey suit and tie, Zhao spent the first afternoon testifying about how during his childhood in China his family was thrown into poverty after his father, was imprisoned for counter-revolutionary activities. Zhao said he had to beg for food and as a teenager was sent to a labour camp. Zhao said he was bullied as a child but was warned by his father to avoid conflict. “No matter what, don’t fight back,” Zhao said he was told.