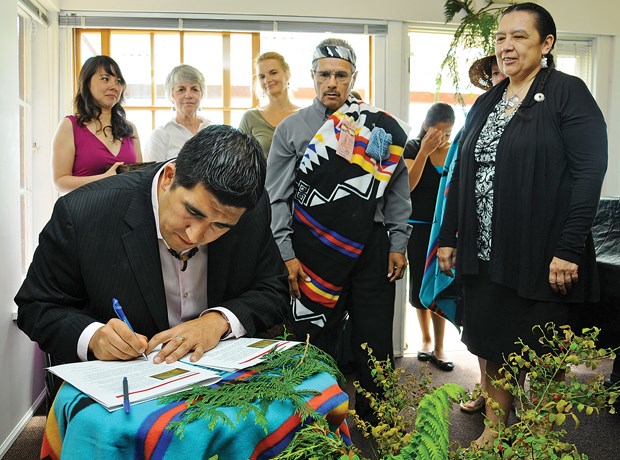 Representatives from the school district, the Squamish Nation and the B.C. Ministry of Education gathered at the Silk Purse Arts Centre June 26 to sign an Aboriginal Education Enhancement Agreement. This is the first time a formal education commitment of this kind has been developed in West Vancouver.

The signing marks a partnership between the parties to improve academic and social opportunities for First Nations, Métis and Inuit students in West Vancouver.

"In practice, some of the things that we will now have put into writing are already happening in our schools," said district spokeswoman Bev Pausche, explaining the agreement has been in the works for some time.

The four guiding principals of the agreement include: improving cultural awareness; developing relationships; collaborating with all educational partners; and inspiring learners.

Pausche said the agreement is meant to promote cultural awareness not just for aboriginal students, "but for everyone - for staff, for students who are not of First Nations descent, so it will show up in our curriculum as well."

The 19-page agreement also lays out three goals: improving the sense of belonging and presence of students of aboriginal ancestry; improving the academic achievement of aboriginal students; and increasing the use of "accurate, authentic and relevant" First Peoples' resources.

There are currently 65 First Nations, Métis and Inuit students in the West Vancouver School District. That number has increased over the last three years, said director of instruction Lynne Tomlinson.

"I can say that we're working to increase our graduation rates. That's what these agreements are all about. .. to support students towards graduation," she said.

More than 50 school districts in the province have signed at least one Aboriginal Education Enhancement Agreement, including the North Vancouver School District.