He’s been a surveyor, construction worker, a leprechaun and Santa. Mostly, though, he’s been the bane of distracted drivers in West Vancouver. Cpl.
Sep 15, 2019 6:00 AM By: Brent Richter 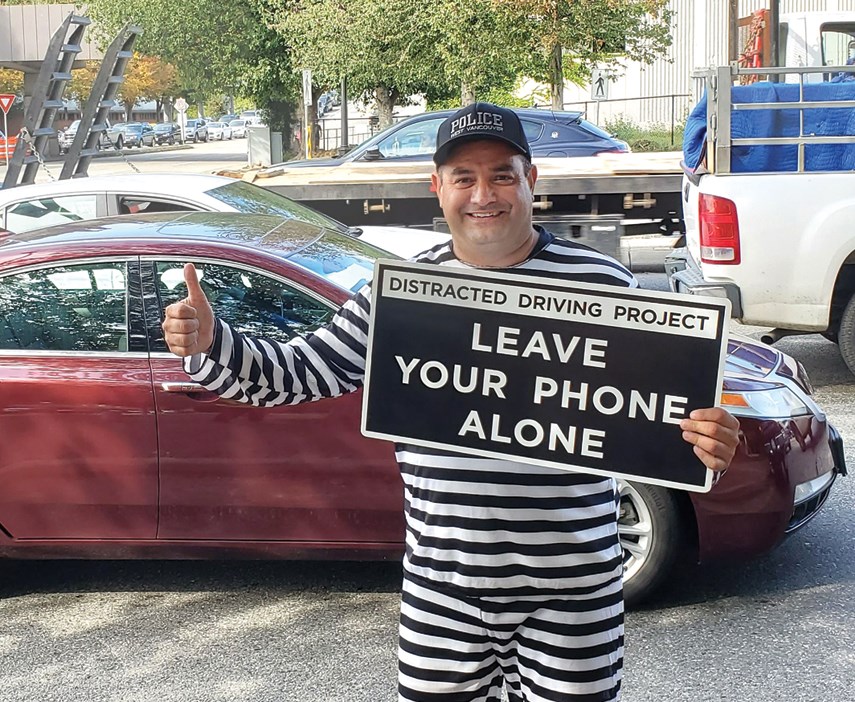 He’s been a surveyor, construction worker, a leprechaun and Santa. Mostly, though, he’s been the bane of distracted drivers in West Vancouver.

Officers nabbed just 39 phone-gazing drivers along Marine Drive (traffic was flowing fairly well at the time), but since 2013, Johal has handed out 1,100 distracted driving tickets – about a third of his total haul.

Johal, who chose to dress up in prisoners’ garb complete with horizontal stripes for his last outing, doesn’t mind making a spectacle of himself because he feels it makes a bigger impact with the public.

“It’s to create public awareness. Otherwise, the message just gets lost in your routine enforcement efforts. If I can get someone to remember this cop dressed up on the corner with a sign, maybe it will get them to think twice about using their phone. … If you laugh at me, that’s fine.”

Despite distracted driving being made illegal in 2010, a lot of people, evidently, are not getting the message, Johal said.

“A lot of them are under the impression that if they’re at an intersection or stopped in traffic, they’re allowed to use their phone,” he said, adding it’s always those same people who wind up causing crashes. “It’s happening for a reason.”

Johal said one head-on collision on the Lions Gate Bridge in December 2013 will always stick in his memory. Police closed the bridge for an hour and a half during the morning commute because a distracted driver crossed into the oncoming lane, getting into a head-on collision with another driver.

Soon after the crash, the woman in the other car had a miscarriage, which she attributed to the trauma of the crash. The driver was issued a $167 ticket the following month.

Today, a distracted driving bust will ding you $368 for a first infraction, plus a $210 insurance premium and four demerit points on your record.

While the fines have increased over time, the legislation hasn’t kept up in other ways, Johal said, noting many vehicles now come with onboard computer systems that offer all the same functions of a smartphone on a screen in reach of the driver’s seat.

“Technology is changing and we have to adapt to that as well,” he said. “Unfortunately, it takes us a while to get change through government.”