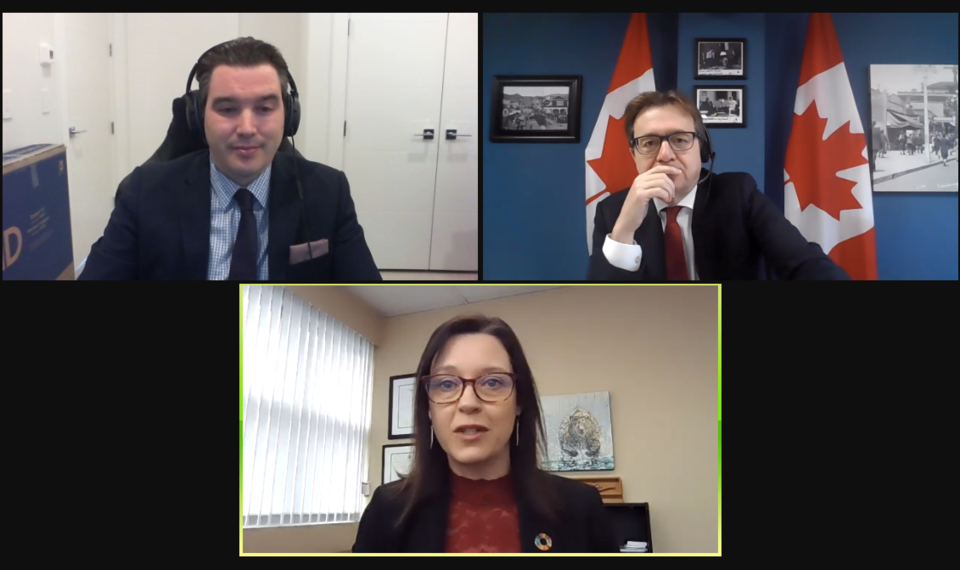 How the federal government will help businesses recover from economic fallout from the COVID-19 pandemic, what will be involved in reopening the border with the U.S. and what Canada’s vaccine rollout will look like were among the questions put to North Vancouver MPs during a virtual event hosted by the North Vancouver Chamber Tuesday morning.

North Vancouver MP Jonathan Wilkinson and Burnaby-North Seymour MP Terry Beech fielded submitted questions on a variety of topics in the hour-long online session, but impacts of the pandemic appeared to be top of mind.

The MPs were asked about supports for the tourism and hospitality sector and what indicators the government needs to see before opening the border will be considered.

Wilkinson said in addition to general wage subsidies rolled out by Ottawa early in the pandemic, there are sector-specific programs, including one that makes credit of up to $1 million available to tourism-based businesses, paid back at “very low interest rates” over 10 years.

“We certainly have tried to respond to some of the legitimate pain that is being felt in the tourism sector,” he said. The government remains open to doing more, he added.

Beech said an estimated “just under $10 billion” has flowed in the sector so far.

Wilkinson described reopening of borders as “an evolving conversation here and pretty much in every country around the world.” He said it’s possible that will be tied to Canada’s vaccine rollout and to the rollout of vaccines in other countries. “Will people who are coming here require a certificate of vaccination, for example, or, or are you going to start with selected countries?” he asked.

“Those are all pretty fundamentally important questions that, I would say, have not been fully resolved yet and probably are going to be the subject of significant international conversation over the coming few months.”

In response to questions about Canada’s fiscal situation, Beech acknowledged “the elephant in the room”: approximately $300 billion in “unplanned spending” made necessary by the pandemic. “Our debt to GDP ratio has shot up,” he said. But with 3.7 million Canadians getting wages subsidized and nine million getting emergency benefits under CERB, “socially and morally” the cost of not spending the money “would be astronomical,” he said.

He added Canada’s triple A credit rating allows the country to borrow money cheaply. “We are able to do this temporarily within our fiscal means,” he said. “Economists all over the world have agreed with us.”

Beech cautioned, however, the government does not want to turn the temporary help into “ongoing operational structural deficits.”

Beech defended the federal government’s record on the vaccine strategy.

Early on in vaccine development, nobody knew which ones would work or be able to be produced quickly “so we took a very diversified approach and made contracts and deals” for a wide variety, he said.

He added while there have been slowdowns in supply in recent weeks, the contracts with the vaccine companies are based on a certain number of doses being delivered every quarter. Canada has been assured those are still on track, he said.

“We believe that anybody that wants to get a vaccine will be able to have one by September. I think we are targeting 20 million vaccines by the spring. We are very much on track for that, and we'll continue to make sure that we hit those targets,” said Beech.

Other topics touched on in the virtual forum included the impact of President Joe Biden’s election in the U.S., climate change and perennial local favourite – the desire to see rapid transit to the North Shore.

“I think one of the great advantages of having President Biden in the office is we will have greater certainty about the predictability of things and how they will operate going forward. I think one of the challenges with the previous administration was just the lack of ability to predict what was going to happen from day to day,” said Wilkinson.

But he warned “Democrats tend to be even more protectionist than Republicans” so Canada will still need to “be very thoughtful” on issues like softwood lumber.

Transportation improvements are still on the radar, said the MPs.

One idea under discussion is a way to connect the lower roads between North and West Vancouver, said Wilkinson.

Local mayors and MPs are still pushing for rapid transit, he added. “TransLink is now taking it quite seriously. I will tell you that wasn't always the case,” he said.

Beech was also asked when a federal election is likely. “I don’t think there’s any reason we need to rush to the polls,” he said. He added personally he’d prefer to see more people vaccinated before an election is called.