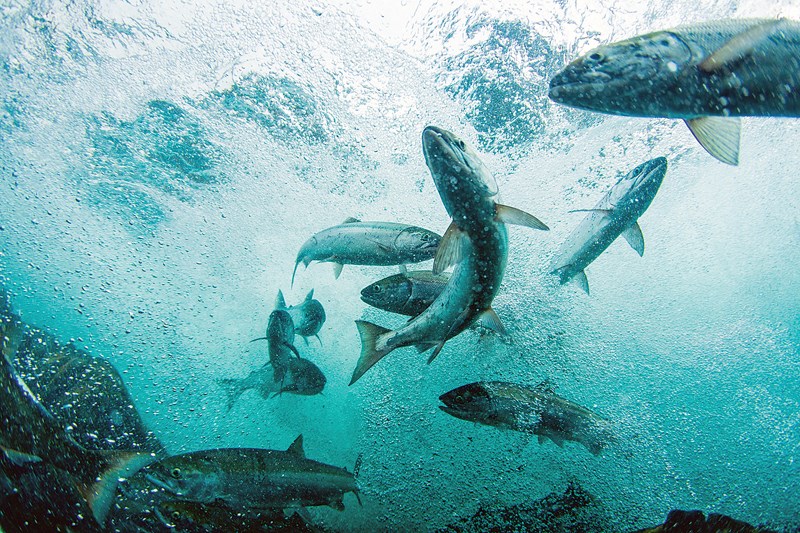 Adams River sockeye travel from their spawning grounds to the Pacific Ocean via the South Thompson and Fraser rivers. They spend three years in the open ocean before returning to the Adams.Supplied Nicolas Teichrob

Uninterrupted brings the mystery of salmon migration to the heart of the city. The free outdoor art installation transforms the underside of the Cambie Street Bridge into a wild B.C. river, at 10 p.m. Tuesday-Saturday from June 28-Sept. 24. Viewing is at the north end of the bridge, at Coopers’ Park. More info: uninterrupted.ca.

West Vancouver filmmaker Nettie Wild spent seven years capturing raw images of migrating salmon for a larger-than-life biology lesson/art installation, which will be projected onto the underbelly of the Cambie Street Bridge this summer.

Standing under the bridge at dusk as the light dims, spectators will be enveloped by the dynamics and drama of the underwater world as it washes over them during Uninterrupted. The audience, for half an hour, will be immersed in the rushing waters of the Adams River at peak spawning season.

Viewers will travel upstream with silver sockeye turning to crimson as they return to their freshwater birthplace to spawn. They will come face to face with the fish on their home turf.

It was Thanksgiving weekend in 2010 when Wild stood on the banks of the Adams River, witnessing the salmon migration with thousands of visitors from around the world. That year, a record-setting 3.8-million bright red sockeye swarmed the Adams in B.C.’s Interior.

“And I saw something that was so moving and so colossal that I can say without hesitation – it changed my life. And I thought: ‘My God, I’m watching something that has gone on uninterrupted for millennia,” says Wild.

That overwhelming experience sparked the veteran filmmaker’s imagination and “come hell or high water” she was going to capture the “abstract contemporary art” that is spawning season on the Adams River. Wild just didn’t know how.

In talking with her editor Michael Brockington (credits include North Vancouver-set documentary Carts of Darkness), they quickly came to the conclusion: “Maybe this isn’t a movie, this is not something you shoot for a rectangle at the end wall in a cinema – maybe it’s outside, maybe it’s a spectacle, maybe we take it into the urban core.”

To say the project was a labour of love is an understatement.

Wild, the artistic director, employed underwater cinematographers outfitted in diving gear and lugging a 150-pound camera 20 feet below the surface in a roaring river. Only two or three shots were filmed topside, the rest taken under water.

“I needed cinematographers who were not just wonderful artists but athletes,” says Wild. “These guys are wrestling with technology and the environment in a way that is far beyond me.”

In the rushing currents the cinematographers were tethered by climbing gear to keep them and the astronomically expensive camera safe. Provided by North Vancouver’s Clairmont Camera, the pricey piece of equipment afforded Wild the ability to slow down the underwater world.

A fish will swim past you in a second. Or there will be a dustup between two male sockeye that will happen in a blink of an eye. Imagine: standard cameras shoot at about 24 frames a second, but this “Rolls-Royce of cameras” captures 2,000 frames a second.

“When you put it under water, all of a sudden the light as it glints through the water turns into slow moving, extraordinary exploding diamonds. And that fish that’s attacking that other fish, at that speed a second turns into two minutes of film – and in that two minutes of film you see a fish’s tail carve water like it’s a sculpture. You actually see one fish looking at another. You actually see a whole world that exists, but to the normal eye you can’t see it. And that’s what we are bringing to the bridge,” explains Wild.

In looking at how to bring those otherwise elusive images of nature to an urban environment, Wild and her team rode around the city on bikes to scout out locations. But she found no such hospitable architecture on which to install the high-tech art.

“Vancouver is a city full of green and glass and nothing to project on,” explains Wild. “And then we rode by the Cambie Street Bridge and there it was in all its great big monolithic wonder with all these surfaces and this extraordinary 3D character that it has marching across the inlet that used to be choked with salmon. We thought, metaphorically, we can bring the salmon back to False Creek.”

A new and welcome challenge Wild faced as a filmmaker was: “How the devil do you shoot for that bridge and how do you edit for it?”

Her company, Canada Wild, created a proprietary editing system and a computer-generated bridge to digitally map the salmon images. Using virtual reality, Wild and her team wore specialized goggles to edit the film and get a sense of what the finished product was going to look like under the Cambie bridge.

When reached on Monday morning, Wild was functioning on very little sleep. She had been up overnight until 7 a.m. and working these past three weeks to bring the massive installation to life under the bridge.

The images will be projected for close to a kilometre on every single surface underneath the bridge including the pillars, starting at the north end. The salmon migration scenes will roll out in front of spectators, over their heads and behind them, fully immersing them in a cinematic spectacle.

Uninterrupted, is new territory for Wild, technically speaking, but her filmmaking purpose remains in focus: to subtly plant the seed of environmental preservation and social activism poetically through art.

There is intentionally no voice-over or narration in Uninterrupted. The images stand on their own. The salmon have the starring role.

Wild’s main takeaway from this project is that salmon are a keystone species in B.C. that need to be protected.

“I actually in my bones know what that means,” says Wild, who had a front-row seat for the circle of life show.  Sometimes the water would be murky because they were filming through bits of dead salmon.

The clear images, meanwhile, solve the puzzle of how fish are able to swim upstream against the strong current.

“We want to create something that has so much wonder in that somebody who … knows nothing about fish except to eat them. They will be exposed to a migration that will work its wonder on them,” says Wild.