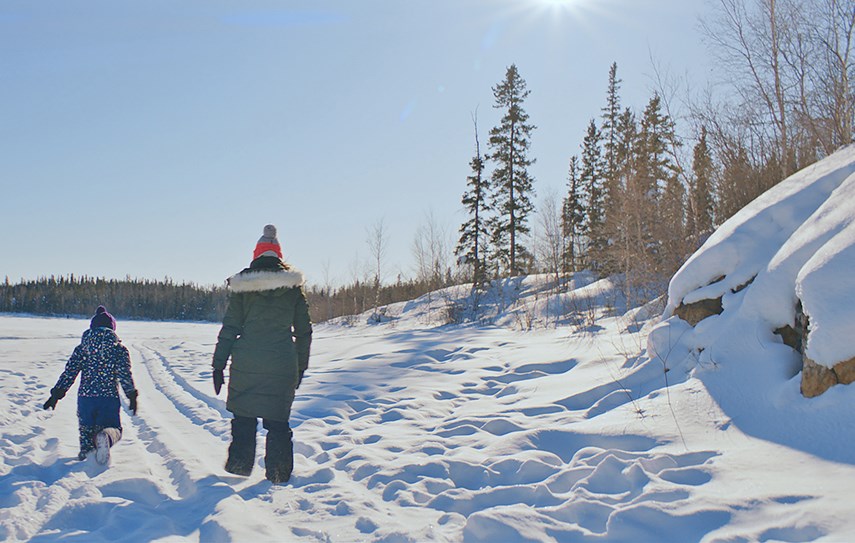 A mother and daughter walk together in a scene from 'Into Light,' a new documentary by West Vancouver filmmaker Sheona McDonald.National Film Board of Canada
Some filmmakers climb mountains and cross oceans to find inspiration, and sometimes there are those happy accidents when a story falls into your lap.

But filmmaker Sheona McDonald’s relationship with the subjects of her latest documentary film Into Light was homegrown.

McDonald was working on a show in Northern Canada and living in Yellowknife, where she made a friend who was pregnant and in need of a place to stay. “She was going through some things, so I said ‘move in with us,’” McDonald remembers. “I didn’t even really know her that well at the time … but she became part of the family.”

The baby was welcomed and loved. McDonald and her family moved back to West Vancouver while mother and baby stayed in Yellowknife. But the baby grew into a toddler who was quiet and withdrawn, who would growl or bark at strangers, or not speak at all.

A shopping trip for the preschool holiday concert changed everything: the child wanted a silver sparkly dress, not a “boy’s” outfit. A few months later: “Mom, do you know I’m really a girl?”

The daughter had been misgendered, McDonald says, and “after hearing everything the mom was going through and thinking she would say no, I asked if she wanted to share her story.”

She did. The mom wanted to help create a resource for other parents of transgender children, a luxury she didn’t have. Logistics followed, about how to conceal the identities of the participants until the child was of age and could choose whether or not to have her name associated with the film. “The film took long enough where the daughter wanted to be involved.”

Filming someone you know presents its own set of challenges, but McDonald says that her relationship with the mom was “definitely more helpful than a hindrance,” noting that mom co-wrote the film and previewed it before it hit the festival circuit.

“I do trust that the right people turn up to be in films and work on them,” McDonald says. “I was the conduit: I was just the channel to bring the people together to get the story told.”

She did a pre-interview and then headed back up to Yellowknife with a small crew to shoot for three days in March 2020. They had planned to return to document the change of seasons but had to get creative thanks to COVID. “We used every frame that we got,” the director says.

Director of photography Simon Schneider has created an accidental travelogue for Yellowknife, capturing the beauty of a place that sees only four hours of daylight in winter, then is bathed in light almost round the clock in summer. “People want to go to the ice castle now!” McDonald laughs, referring to a location in the film that will quickly be added to every Canadian bucket list.

McDonald and her husband, actor/producer/screenwriter Jonathan Lloyd Walker, live in Horseshoe Bay with their 17-year-old daughter and sons aged 11 and 14. “I have a tremendous amount of hope and faith in the generation that is coming up now,” she says. “Their understanding is amazing, their ‘Who cares?’ is amazing: they care but they don’t care. Gender is not a big deal to them.”

The film is sobering: a doctor tells the mom that she will either have “a happy daughter or a dead son,” reinforcing the staggering 40 per cent suicide attempt rate for non-binary youth. And you can’t help but shed a tear when the child, wise before her time, says to McDonald: “I was really happy when she let me be who I was on the inside.”

But it is a joyous story too, a beautiful story befitting the film’s title. “Even in concealing their identities, they are not in the shadows but in the light,” says McDonald. “Hopefully [the film] touches you and makes you smile at the end. And I hope it just can have a tiny effect or have one parent feel like they’re not alone.”

The film makes its world premiere at the Hot Docs Festival in Toronto (now through May 9), followed by its Western Canadian premiere in Vancouver at the DOXA Documentary Film Festival, May 6-16. Both festivals will make the film streamable to the public through their websites.