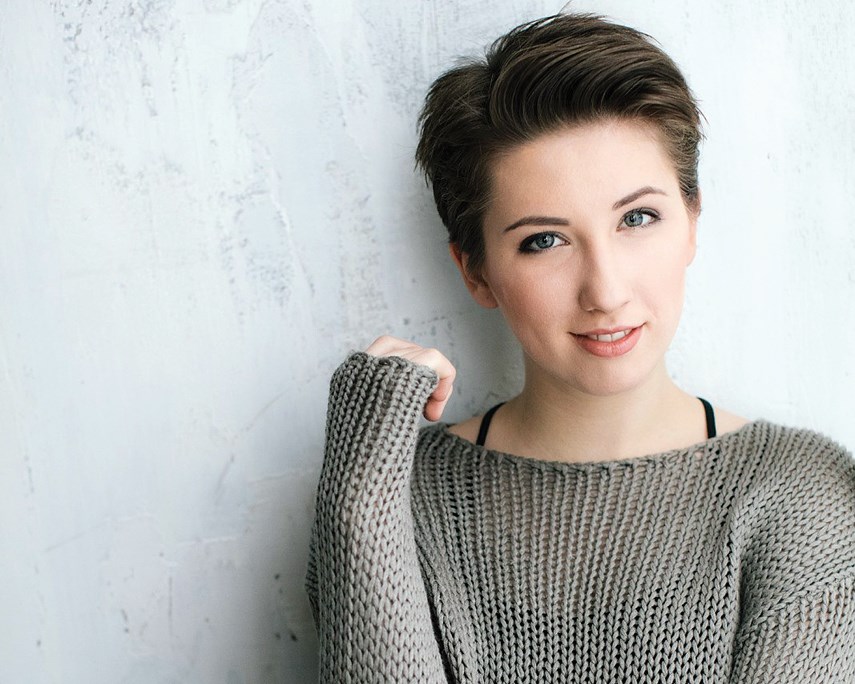 Michelle Creber is also the voice of Apple Bloom on the hit animated show My Little Pony: Friendship is Magic and regularly makes appearances at anime conventions to meet the show’s fans worldwide.Supplied

13: The Musical at Waterfront Theatre until Oct. 8. Tickets and info: botco.eventbrite.com.

Michelle Creber gets to hit rewind on her teenage years for her latest role as a mean girl in 13: The Musical.

Except in real life the West Vancouver actress is more like Lindsay Lohan’s character, Cady, in Mean Girls than Regina George.

Creber says it’s been a great challenge to play Lucy in the Broadway musical 13 because of how little she has in common with the conniving character. And the fact Creber is an 18-year-old playing a preadolescent.

“My main goal is to get with this head boy named Brett. He likes my best friend Kendra. So, most of my foiling is trying to ... break them up,” explains Creber.

As the show goes on her character becomes increasingly nastier.

“Like you definitely see sort of a breaking point that is a very crucial part of her timeline as a human being,” says Creber. “There’s a part where something really doesn’t work out for her and this sort-of devil comes out.”

By the end of the musical Creber has fully morphed into a mean girl.

Set in the uncertain days of middle school, this clever coming of age story follows 12-year-old Evan Goldman who is abruptly yanked from his New York City life in the aftermath of his parents’ divorce and transplanted to small-town Indiana. The new kid in school now finds himself navigating the popularity pecking order, while planning what he hopes will be an epic bar mitzvah attended by all the cool kids.

“Sometimes the director will have to be like, ‘Guys, just quiet down for a second because we are all full of beans. But it’s been really fun,” says Creber, who is effusive with praise for her castmates.

The musical’s cast merges together the city’s most precocious thespians and packs that talent and energy into one show, according to Creber. Many of the teen actors have appeared in shows on such networks as ABC, NBC, CBC, Disney and FX.

Creber is a teen star herself, who has currently amassed more than 28,000 subscribers on her YouTube channel. You might not recognize her face, but Creber’s voice is familiar to her legion of fans worldwide.

Creber stars as the voice of Apple Bloom on the hit animated show My Little Pony: Friendship is Magic and regularly makes appearances at anime conventions and fan cons, which are serious business.

Google “bronies.” These are grown men who love My Little Pony.

Recently, Thailand was the scene of Creber’s 31st convention.

“It’s a really unique and eclectic group of people. They’re lovely and a lot of them are very intelligent. And with super intelligence often comes some social anxieties and feelings of not fitting in. And at these conventions we found it is an outlet for these people who feel like outsiders to really be themselves,” says Creber, clarifying that it’s a cross-section of fans who attend the conventions and only some might have social anxiety.

Creber adds award-winning actor, singer, dancer, musician and songwriter to her list of talents, which you could say are innate; her parents are musical heavyweights.

Michelle’s mom, Monique Creber, is a recording artist and the musical director for 13: The Musical, while her dad, Michael Creber, is a Grammy-nominated musician with a wide-ranging career as a pianist, film composer, arranger and producer.

He leads the live band for 13: The Musical.

Michael counts touring with k.d. lang, recording and writing with Raffi (Creber still gets royalties for Bananaphone), performing at Bill Clinton’s inauguration and appearing with lang on the Johnny Carson show, Arsenio Hall, Saturday Night Live and at the Grammy Awards as career highlights.

Michelle herself had the chance to collaborate with a musical great, singing “Just the Way You Are” with Billy Joel for a Hallmark movie. While recorded in separate studios, Michelle says it was neat to hear her voice melodically merged with the “piano man.”

Michelle is currently writing and recording a new solo album featuring all her own originals songs, due out  next year.

Meanwhile, the Creber clan will strike again when mom, dad and daughter team up for a run of Little Women at Kay Meek Centre in December. Michelle will star as Jo, Monique plays her mother, and dad Michael is the musical director.

For now, Michelle is concentrating on being 13 again. She says the premise of the show shouldn’t scare away older audience members.

“I know some adults have asked me, ‘Well, it’s a show about 13-year-olds, why would I want to come see this, it’s going to be about adolescence and stuff,” says Michelle, who answers that 13: The Musical is a fun show for adults to reminisce about their teenage years.

“It’s incredibly entertaining, fast-paced – and it’s nice and short. It’s a powerpack of dancing and singing.”