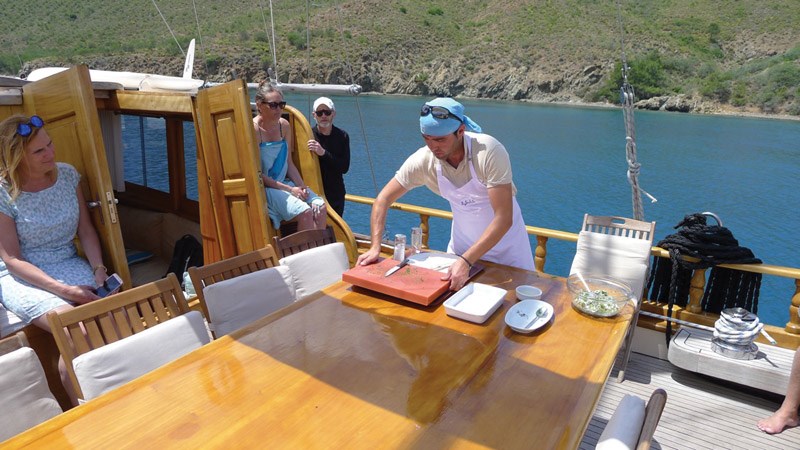 Lunch was on deck, as were all meals, served after a swim in a cove, and on to an island port for a stroll along the waterfront.Supplied, David Wishart

As Kenneth Grahame wrote in Wind in the Willows, “there is nothing - absolutely nothing - half so much worth doing as simply messing about in boats.”

Which is sort of what I am doing on a small boat in the Greek islands as we sail where we fancy. There is no set itinerary; we go by sail or motor where the going is good and a friendly taverna awaits.

Our vessel, Naviga 1, is 25 metres long, a tad bigger than Water Rat and Mole’s craft, but a world apart from cruise ships longer than three football fields which definitely do not mess around.

She is not an ocean racer like the sloops that race from Victoria to Maui, but a sturdy, beamy ketch with two masts, three big sails and a powerful Caterpillar engine good for almost 10 knots and allows necessities such as ice for our gin and tonics.

And there is a bell, which the captain uses to summon passengers, up to 16 on Naviga 1, when he has information to share such as where we are and our next stop, which may not be a port, but a quiet little cove perfect for swimming.

There are a few formalities, such as our arrival and departure. I flew into Kos, one of Greece’s Dodecanese islands in the Eastern Mediterranean close to Turkey.

Like many places in this part of the world, Kos has seen volatile times, been occupied by Greeks, Romans, Turks and Italians, and has suffered devastation by earthquakes. These days it enjoys a genteel living as a boating base with abundant sandy beaches, and a harbor town dominated by the 15th-century Neratzia Castle. Nearby are the ancient Agora ruins, and a tree in the shade of which Hippocrates is said to have expounded his theory that diseases were caused by natural causes and not superstition or gods.

I was picked up by a friendly driver representing the gulet company, SCIS (Sailing Cruises in Comfort) and within half an hour I was on Naviga 1, with a smiling crewman handing me a welcome gin and tonic.

This set a pattern – there was no limit on such drinks, in fact everything including very drinkable wine – and the smiles from a young crew who worked their socks off to keep us happy. It recalled the hotelier who once told me, as he told all his employees, “a smile is just a little thing, but it is everything.”

Naviga 1 was moored stern on, Med style, under the castle wall and with a score or more similar vessels, mostly built from pine and teak. Farther along the quay were excursion boats offering visits to the Turkish yachting centre of Bodrum and day trips to nearby islands, fishing boats in blue and white and crewed by grizzled blokes. One advertised fishing trips. At the far end an American couple sat in the boat they had built in Turkey and which they were going to ship to Florida.

The next morning we went south for two hours to Nisyros where a small bus took us up a narrow, winding road such as one finds above the Norwegian fjords to the crater of a volcano, then we carried on to a tiny village tottering  beside an azure sea. Beside a pretty little church a cafe served us soumada, a refreshing drink made from almonds.

Lunch was on deck, as were all meals, served after a swim in a cove, and so to an island port for a stroll along the waterfront.

The spectacular island of Symi was next. The main port has a bustling harbour, lots of shops and one bar, the Harani, with mind-blowing cocktails and music made for dancing. It would have been a night to remember if we could remember anything, but we certainly loosened up.

In the morning a bus climbed more steep hillsides affording amazing views as we stood gingerly on ledges, stepping over wild oregano and sage plants. Then down to a fine abbey by the waterfront where our boat picked us up having sailed around the island.

That night the anchor was dropped in a small bay, and a picnic dinner was held on shore. We woke to the sounds of goats on the steep hillsides nearby, and it was almost biblical.

Naviga 1 got under sail almost every day, and it can get up to 12 knots with a good wind, and on one occasion dolphins joined us for a lively sprint. A cooking demonstration was held on deck, and we visited a couple of Turkish ports on the Datca peninsula.

Everywhere we got a warm welcome, on land and at sea, and back in Kos docked beside another gulet whose passengers were all chic young women.

What is it about gulets, a bachelor passenger asked over a glass or three of ouzo? We were all for repeating the very good cruise. He was in no doubt.

If you go:
A week costs about $1,500 per person, less if the whole boat is chartered, which is a popular option for friends and families. There are 15 itineraries, some offering sailing lessons, biking, cooking and more.
For more information visit scicsailing.eu.