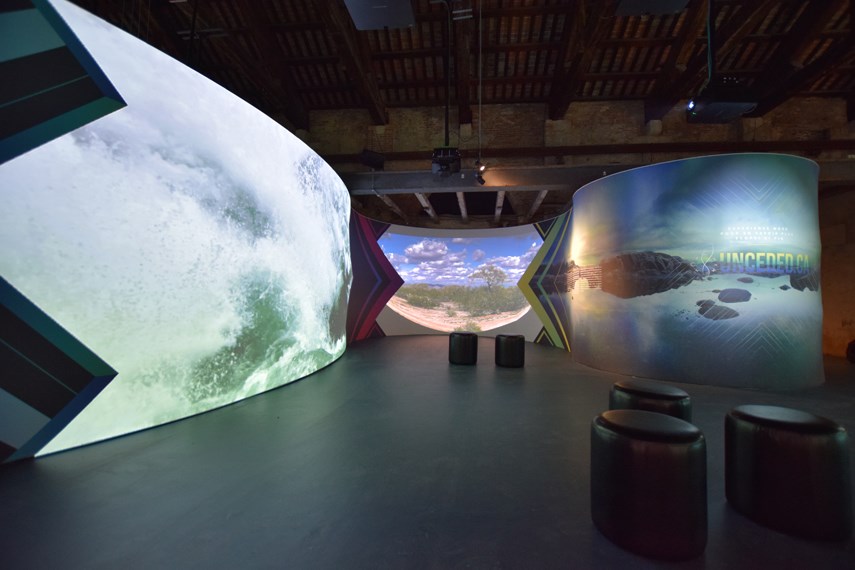 The Unceded project features a series of interconnected curving screens that take passing guests through a labyrinth of images and scenes of Canada’s past and present, images of residential schools, as well as showing short featurettes of Indigenous architects from across North America explaining – and presenting – their unique architectural worldviews.Supplied, Cueyo Laux

In an old building in Venice, the past, present and future of Indigenous architecture from what many refer to as Turtle Island is being shown to the world.

Canada’s official entry at the 2018 Venice Architecture Biennale, commonly considered the world’s premier forum and exhibition of international architecture, is led by architect Douglas Cardinal, curators Gerald McMaster and David Fortin, and 16 other contemporary Indigenous architects and designers from across Canada and the U.S.

Their project, titled Unceded: Voices of the Land, aims to showcase Indigenous architects’ tools, methods and points of view when it comes to designing buildings and helping to create sustainable communities.

“Part of this exhibit is to talk about the bridge between pre-European, and the advent of residential school, and that broken connection to a development of an Aboriginal culture that would have taken place without colonialism,” explains Alfred Waugh, who is the owner of Formline Architecture in West Vancouver and was also one of the architects chosen to participate in the Unceded project. “There is a dialogue about how colonialism has affected First Nations.”

And while the project showcases how past abuses of Indigenous people created a harmful legacy, specifically with the residential school system, it’s not intended to solely dwell on the past either, instead demonstrating how Indigenous peoples can and have made valuable contributions to 21st century architecture and planning due to their own ingenuity.

“I’m more interested in the work I do,” says Waugh, who is originally from Yellowknife, N.W.T and is also a member of the Fond Du Lac Nation of northern Saskatchewan. “I’m more interested in moving forward in the 21st century and finding an expression of Indigenous architecture that is reflective of who we are today.”

The Unceded project features a series of interconnected curving screens that take passing guests through a labyrinth of images and scenes of Canada’s past and present, images of residential schools, as well as showing short featurettes of Indigenous architects from across North America explaining – and presenting – their unique architectural worldviews.

The exhibit is separated into four themes, or “territories,” called sovereignty, resilience, colonization and, finally, indigeneity. The exhibition’s progression moves from a point of independence, to attempted cultural genocide, to the current place of truth and reconciliation. It also goes on to demonstrate that due to Indigenous peoples’ experience of living in varied urban and rural spaces, Canada’s many First Nations harbour considerably unique perspectives.

Waugh sees part of the role of contemporary Indigenous architecture as aligning itself with the natural world and drawing inspiration from the beauty embedded in the landscape.

He alludes to the Upper Nicola Band in the southern Interior that is hoping to build potentially the largest solar farm in the province on its Quilchena reserve as one example of a tribe, working off the grid, that’s able to explore alternative forms of energy in a bold new venture. From a design point of view, it’s the kind of project the longtime architect finds fascinating.

He also stresses the plurality of the “Voices of the Land” part of the project’s title, adding that the Indigenous experience isn’t one dimensional – there are many different First Nations cultures with different views and different styles, he says.

Waugh graduated from UBC’s architecture school in 1993. As an individual that identifies as Indigenous, he sees the Unceded project as opportunity to make First Nations culture and archi-tecture a greater part of the mainstream, with “one foot in the past and one foot in the future.”

Waugh’s mother was a residential school survivor. He’s versed in past traumas and hardships.  He remains optimistic about the future.

“Now you’re having more and more First Nations students coming through the education system and choosing architecture,” he says. “I see in the future that this will become an evolving expres-sion of architecture.”