IF you think living in the suburbs is all about wearing "mom" jeans, driving a minivan and becoming obsessed with lawn care, think again, says Sarah Daniels. Daniels co-hosts Urban Suburban, an HGTV show that pits condos against splitlevels.
Aug 31, 2012 1:00 AM By: Jen St. Denis 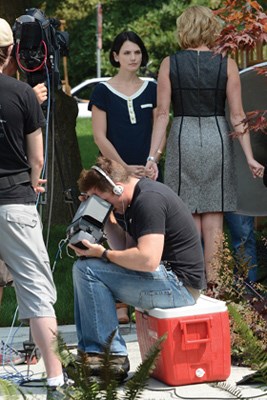 IF you think living in the suburbs is all about wearing "mom" jeans, driving a minivan and becoming obsessed with lawn care, think again, says Sarah Daniels.

The show was recently in North Vancouver shooting an episode for the upcoming season.

"We kind of team off," says Daniels about working with her brother on the show. "Philip will be trying to pull at the heartstrings of the person that's urban and trying to get that suburban leaner over to his side, and I'm trying to do the opposite."

In reality, Daniels and DuMoulin are real estate agents who both live in the suburban stronghold of south Surrey, although they grew up on the west side of Vancouver. Before becoming a real estate agent, Daniels was a traffic and weather reporter for Global Morning News and CKNW.

The brother and sister team were selling real estate together when Daniels pitched the show.

"I sort of thought, well if we're working together I'd better drag him along with me," says Daniels, "because he's going to be really choked up if this gets picked up and we're filming all the time and he's stuck here working."

The pair have been filming episodes for the show's second season since March, and have travelled from Vancouver to Halifax, hitting various cities including Calgary, Edmonton, Regina and Toronto along the way. They've just wrapped up their shoot in Vancouver.

In each city, the team compares an urban neighbourhood to a suburban one. For example, in the first season, Daniels and DuMoulin set Vancouver's Riley Park against Port Moody. In each episode, a couple is shown three urban homes and three suburban ones. Then the persuasion begins.

"They love looking at houses, and in our halfhour show you get to see six houses," he says.

"People love to guess what house the couple's going to choose."

The show delves into a basic question, says Daniels.

"The struggle of where one is going to live: Are you going to stay in the city core, maybe have less square footage but get down to one car, or are you going to move out to the suburbs and have more space?"

The sticking point for many is the commute, but Daniels says the changing nature of work can be a solution to that problem.

"(For) a lot of people now, it's not a big deal for them to move to the suburbs because so many people telecommute, they job share," she says, adding in cities like Vancouver, a lot of jobs are moving out of the downtown core, which is becoming primarily residential.

Public transit solved the problem for one half of a couple who started out being staunchly urban.

"He said 'You know what, the transit options are pretty good over there, maybe I'll get out of my car and use transit instead,'" DuMoulin recounts.

The commute is also relative. Daniels and DuMoulin, who are lifelong Lower Mainlanders, couldn't believe their ears when a couple from Regina complained of a 12-minute drive.

"But relative to what they're used to, that is a commute," says Daniels.

While families who choose to stay urban may have to figure out how to live in less space, they may be closer to amenities.

"They can be downtown within five to 10 minutes, the community centres are there, the daycares are there, everything's there," says DuMoulin.

Part of the fun of the show also comes from comparing house prices and availability in other parts of the country. Vancouverites will be green with jealousy when they watch the Halifax episode.

"You're sitting in Vancouver and thinking crap, I can barely afford a onebedroom apartment for $400,000," says Daniels.

"(Then) you see that in Halifax you can get a nice starter home 10 minutes from the downtown core with nice upgrades for, like, $379,000."