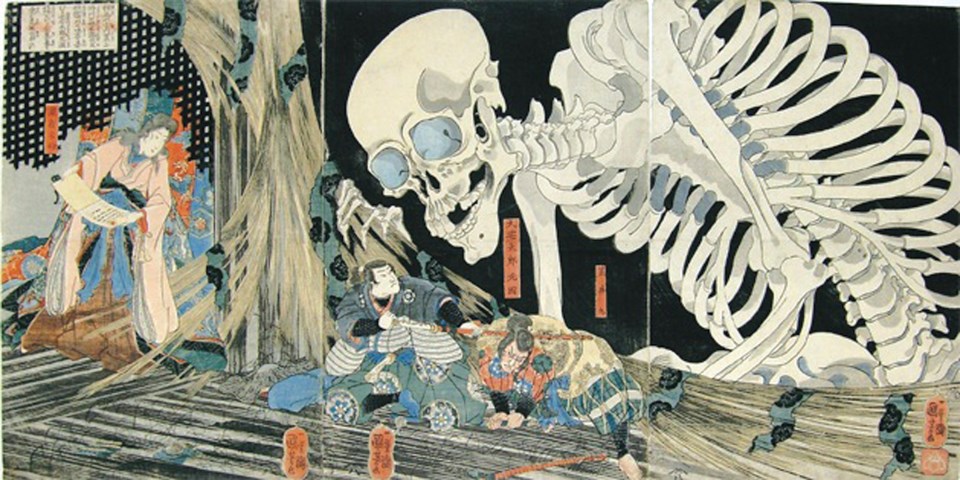 A towering skeleton has just interrupted a murder, and for a moment the killer and the leering embodiment of mortal dread meet, eyeball to eye socket.

In pre-manga Japan artists spent the better part of three centuries crafting woodblock prints, called ukiyo-e. Loosely translated as "pictures of the floating world," ukiyo-e is a record of Japanese esthetics and censorship between 1603 and 1867.

The complexity of the work intimidated West Vancouver Museum's Kiriko Watanabe, who initially turned down a chance to curate the show.

"I didn't feel I had enough knowledge," she explains.

Watanabe made several trips to Tokyo, learning more and more about the art form through scholar and ukiyo-e collector Inagaki Shinichi.

"Every time I visited he would spend hours and hours showing his prints and describing what they are and describing a lot of information behind them," she says.

Shinichi and Watanabe are co-curators of Ukiyoe Spectacular, running until March 22.

The prints feature sorcery and bandits, gods and geishas, but they also have deeper meanings buried amid intricate details.

"Each print has so much meaning and these meanings are often given by some of the visual cues embedded in the design," Watanabe says.

To illustrate her point, Watanabe discusses a print entitled Fukusuke.

"If you look at his face closely, the eyebrows are made of brushes, the eyes are blowfish, the nose is a letter 'fu' in Japanese, and the mouth is a decorative string," she explains. "All of those relate to the word 'fuku.'" Fuku means happiness or fortune in Japanese.

And if you look very closely, you can also see that the creases of the boy's kimono form the letters of his name.

"It's very, very complicated, and even a native Japanese who speaks the language. .. would have to look hard to see these cues," she says.

The print was likely issued at the beginning of a new year to usher good luck into a household, according to Watanabe.

Despite many of the prints dating back more than 150 years, the colours remain vibrant.

"The middle-Edo period is considered to be the golden time for producing Ukiyoe," Watanabe explains. "The designs had reached their highest level."

Some historians trace the origins of the woodblock prints to the eighth century.

In his book Ukiyo-e: The Art of the Japanese Print, author Frederick Harris suggests woodblock cutting was used to carry Buddhist literature, enabling the religion's sweep across Japan.

The black ink was eventually rounded out with bright pigments harvested from the safflower.

Like rock 'n' roll posters that are better than the bands they promote, much of ukiyo-e was banners advertising kabuki theatre, sumo, and events at bars and brothels.

Later renamed Tokyo, Edo was home to a thriving class of merchants enjoying peace and prosperity as the age of the samurai came to an end.

While the Tokugawa shogunate is often credited for presiding over a peace that marked the end of an era characterized by warring clans and Mongol invasions, the ruling family instituted censorship over the arts in the 1840s.

Ukiyo-e artist Santô Kyôden was handcuffed for 50 days after penning a light novel entitled The Daytime World of the Brothel.

His publisher was also fined half his net worth.

According to writer and researcher John Fiorillo's work, Viewing Japanese Prints, the punishment was intended to intimidate all writers.

Artists were forbidden from depicting many typical ukiyo-e subjects, including kabuki actors.

"To get around this, Ukiyoe designers started to use animals in place of humans," Watanabe explains.

If a spectator looked closely at the face of an ukiyo-e turtle, he might recognize the facial expression of a famous actor, according to Watanabe. An actor's family crest is also visible on a turtle's shell.

For Watanabe, the details are part of the pleasure.

"You have to look carefully to see what it is that you're seeing," she says.