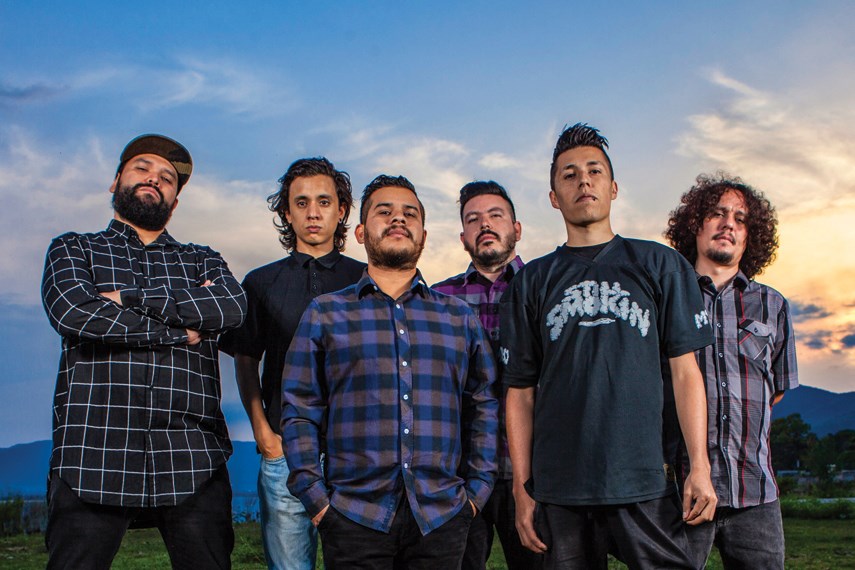 Troker cites influences ranging from Oscar Peterson to King Crimson to the Wu-Tang Clan in their music.Supplied, Calavera Estudio

The lowlifes burned through high society; leaving a trail of empty pockets and bullet holes that one detective followed across Mexico as revolution gripped the country.

The more-or-less true story of the gang’s eventual capture and execution is the subject of the 1919 Mexican film The Grey Automobile. For decades the landmark silent film (starring the real detective who worked the case) remained in what Maxim Gorky defined as: a grey world populated by silhouettes “condemned to eternal silence.”

The six-piece band composed and performed a 170-minute soundtrack for the film; infusing The Grey Automobile with nuance, texture and colour.

Collaborations that cross borders and boundaries are an essential part of Troker, explains the band’s co-founder and bassist Samo Gonzalez.

Gonzalez speaks through a crackling connection in Guadalajara, Mexico, with a little help from band manager and translator Ana Rodriguez, whose translations sometimes seem a tad more detailed than Gonzalez’s initial answers.

While the band members come from across Mexico, Troker was born in Guadalajara. It’s a movie town, Gonzalez explains, a bustling city of filmmakers and festivals where a screening of a classic movie with a brand new score is an event not to be missed.

But writing nearly three hours of music without falling prey to the ease of repetition presented a challenge.

To handle that challenge, the band repaired to a little house with plenty of space for music and no cellphone signals.

With no distractions the band sits in a circle and talks about what they want their music to be.

They call the approach: “composition democracy,” Gonzalez explains. If a band member comes up with an idea, the band does their best to bring that idea to life.

Sometimes that means a lick that feels a bit like heavy metal, some scratching you’d expect on a hip hop record, or horns that veer from mariachi traditions to the wall of soul tucked behind Otis Redding.

Providing the pocket for all that multi-coloured noir is Gonzalez, who’s been playing bass since he was 12 years old.

Gonzalez had been eager to get into a metal band but he didn’t have an instrument. What he did have, however, was a fish tank his grandmother gave him.

Enterprising and determined, Gonzalez organized a raffle with the winner getting the fish tank. While it wasn’t what his grandmother had in mind the gambit made enough money for Gonzalez to get a bass and kickstart his musical career.

After playing in a string of bands he spent a stint studying classical music at the Conservatorio de Las Rosas.

He left the school, but not before forming a friendship with Juan Carlos “Frankie” Mares, an energetic drummer who knew his way around Buddy Rich and John Bonham.

They were looking to start a rock group but there was something about Guadalajara that pushed them in a different direction.

Gonzalez was experiencing the learned spontaneity of Charles Mingus while exploring the possibilities of jazz offered by Medeski, Martin & Wood. The duo started thinking about jazz, but not exactly about the jazz people know from the Ken Burns documentary.

As an unattached rhythm section, Gonzalez and Mares started hitting different clubs in town, quickly spotting a saxophonist, a trumpeter, a pianist and a DJ.

All told, the band cites influences ranging from Oscar Peterson to King Crimson to the Wu-Tang Clan.

The music is about expressing everything they are, “heart and soul and guts,” Gonzalez says.

And while they haven’t become a hugely popular band in Mexico, Troker is slowly gaining an international audience, playing at the Glastonbury Festival and NPR’s Tiny Desk series.

“The prize of this journey is always to take their music to a new audience,” Rodriguez says.