The Clock rolls out in real time at The Polygon

Christian Marclay's epic 24-hour montage on view at gallery through the summer
Jul 5, 2019 8:29 AM By: Jeremy Shepherd 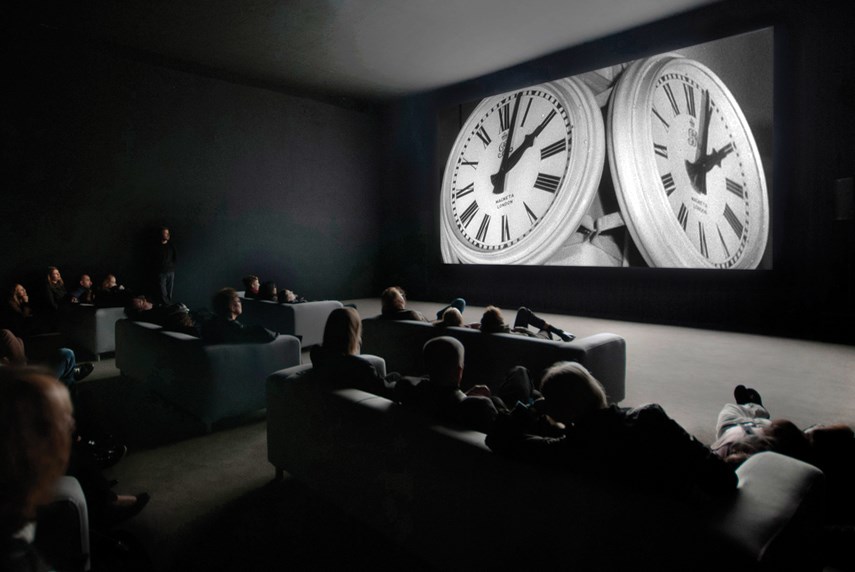 Viewers sit on white IKEA couches to watch Christian Marclay’s The Clock, a looped 24-hour video installation that functions as a clock synchronized with real time.Supplied, The Polygon Gallery

The Polygon Gallery presents Christian Marclay: The Clock, a cinematic montage synchronised with actual time on a 24-hour clock, July 5 to Sept. 15. On select Fridays, the gallery will stay open overnight for 24-hour screenings. During these overnight screenings, visitors will be able to see the evening and early morning sections of the film. Dates include: July 5, July 26, Aug. 16, Sept. 6, Sept. 13 (thepolygon.ca/exhibition/the-clock).

Stephen Hawking pointed to its arrow. Peter Lorre called it a crook. Tom Waits said it was a peculiar item and The Rolling Stones warned that baby, baby, you’re out of it.

Director Peter Bogdanovich once recalled sitting with Jimmy Stewart, the two talking about movies and the way little moments can impact and endure in the minds of the audience. Stewart, who’d played everything from Hitchcock’s obsessed man to the man who shot Liberty Vallance to the saviour of Bedford Falls, told Bogdanovich something that stuck with him. If you’re good enough or lucky enough, Stewart said, you could give the audience: “pieces of time.”

Imagine those black & white and Technicolor pieces: High Noon, Chimes at Midnight, Cleo from 5 to 7 and Dolly Parton in 9 to 5. Harold Lloyd and then Doc Brown hanging from a clock. And now picture the pieces put together, a seemingly impossible jigsaw puzzle created and then solved in Christian Marclay’s The Clock.

The Clock – as much movie as art installation – is a 24-hour montage of cinema and television going back 70 years. Each clip features a clock, and each clock is synchronized with the real time in the outside world.

Marclay won the Golden Lion when The Clock played during the Venice Biennale in 2011, which is where Reid Shier “happily stumbled upon it.”

Shier, the director at the Polygon Gallery, was walking through Venice at 1 a.m. when he came across a movie theatre that was still open.

He and a friend decided they’d maybe stop in for a couple minutes before heading back to the hotel.

“We were there until four o’clock in the morning,” Shier says. “We simply couldn’t get up.”

He saw people rushing, wasting time, killing time. There were workers watching the clock and lovers forgetting the clock – only to have the enraged husband walk in at the wrong time.

“It’s not like an esoteric art film,” he says. “It’s composited out of movies that you’re very, very familiar with.”

Marclay is a multimedia artist with a long history at the turntable and it’s his fascination with sound that carries the audience through film history, according to Shier.

“It’s as much about sound as it is about film and visuals,” Shier says. “Sound from one clip will bleed into the next clip and carry you through.”

It took Marclay, 10 assistants and three years to comb through more than 10,000 movies in order to find every moment in a day.

Showing those 10,000 moments came with a “very specific” set of conditions, Shier says.

He’d wanted to show The Clock when the gallery was still at Presentation House Gallery at Third St. and Chesterfield Avenue but the venue wasn’t big enough.

The Clock can only be screened in a custom built theatre that looks like a black box. The artist also demands a “very specific Ikea couch,” Shier says. At last count Polygon had 18 of the couches, he adds.

“People are invited to stay and watch for as long as they like,” Shier says. “Give it a minute and I guarantee you’ll stay for an hour.”

Eight years after his introduction to The Clock, Shier says he’s looking forward to seeing all the pieces of time he missed at the first viewing.

The Polygon is scheduled to stay open for a series of 24-hour screenings on July 5, July 26, August 16, September 6 and September 13.

See it. If you have time.