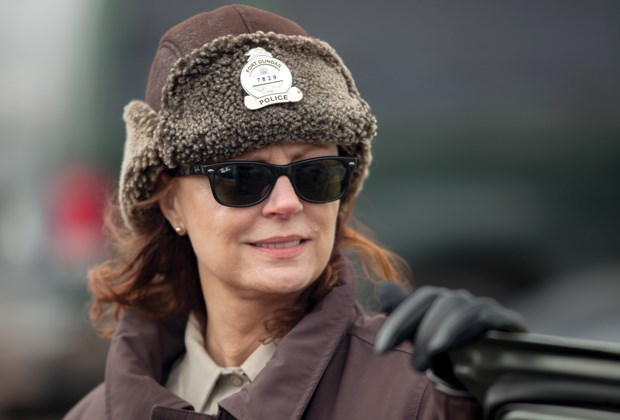 Progress comes slowly to the fictional town of Fort Dundas, Ontario: Detective Inspector Hazel Micallef (Susan Sarandon) has had a new cell phone sitting in its box on her desk for three months, and only one person in the three-man office can reliably work the Internet.

Hazel reaches for pills before she even gets upright in the morning and spends the day adding bourbon to her coffee, trying to ease a chronic back injury. Not much happens in this desolatelooking small town (sorry, City of Hamilton, where The Calling was filmed) so it's a shock when Hazel discovers their first murder in four years.

It's a particularly grisly crime scene. When a second body turns up, Hazel thinks she might have a serial killer on her hands. Rookie officer Ben Wingate (Topher Grace) shows up from Toronto to do some of the legwork but Helen is shot down when she asks her superiors for someone with homicide experience. Her reluctant friend Det. Ray Green (Gil Bellows) thinks she's in over her head. He's not alone: "Your stubbornness is going to kill you," says a former lover. Mom (Ellen Burstyn) laments that she never sees her daughter smile.

There's a pattern of ghastly post-murder manipulation to contend with and it turns out there are similar murders across the country. The small team comes to realize that the killings are based on early Christian mysticism; they turn to a somewhat cagey Father Price (Donald Sutherland) for help. The detectives are skeptics: "The only god I ever prayed to was Guy Lafleur," jokes Ray; Hazel, meanwhile, could use a little salvation of her own.

In this way, the film is equal parts murder mystery and character study. Hazel is a victim of sexism and geographical discrimination, and is discredited thanks to her history with booze and pills. She has suffered an unspoken heavy loss, a study in loneliness. Her search for the killer is as much for her own cathartic healing as it is to seek justice for the victims. Many will compare Hazel to Frances McDormand's Fargo police chief, but she is more like Brenda Blethyn's flawed detective in the Brit crime series Vera. (In fact, Hazel's story is one that could easily be spun out for an episode or two.)

The audience knows who the killer is early on which quashes some of the suspense but only underscores the fact that this is Hazel's journey. The killer is also part healer, and has a novel reason for offing his victims. "If they are pure of heart and mind," people can be cured, he preaches.

The Calling is not strictly a connect-the-dots thriller: we see some plot twists coming, but not all, and some mysteries are left unsolved. Director Jason Stone - whose only other feature was the vastly different This Is The End - has directed a satisfying mystery overall, heightened by some superior performances. It's up to you and your movie date to argue whether scriptwriters should have chosen a different redemptive path for Hazel at the film's end.