The Bad Batch a dystopian romance made for dark times 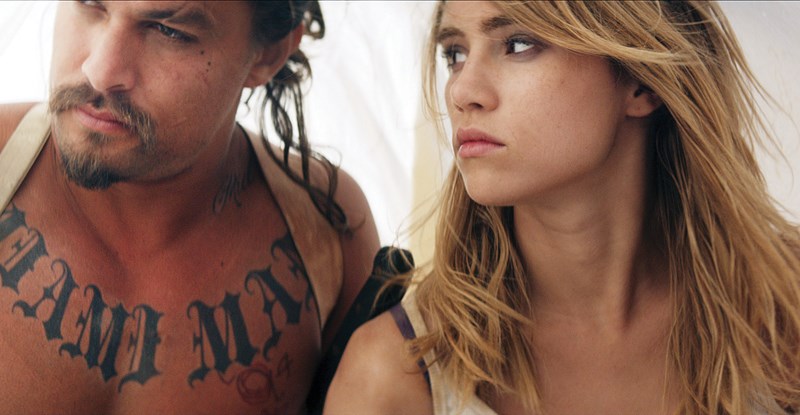 Her first film, A Girl Walks Home Alone At Night, was billed as “an Iranian Vampire Western”; Ana Lily Amirpour’s follow-up film The Bad Batch could as easily be described as “a Futuristic Cannibal Spaghetti Western,” a dystopian genre mash-up with obvious parallels to current Trump-era politics.

An intense opening scene establishes our heroine’s predicament: after being tattooed with a number for identification, a young woman (Suki Waterhouse) is dumped unceremoniously at a gate in the border fence armed only with a sack lunch and a gallon of water. A sign warns dumpees that they’ve now left the Republic of Texas and entered the United States, a violent and caked-dry desert wasteland. It’s not a good omen when the posted warning sign ends with the phrase “good luck.”

She seems confident of her chances of survival beyond the fence, even taking time to put on lipstick in an abandoned car. It’s here where she is taken, and wakes up chained in the skeletal wreckage of a downed plane. And here, like one of the more memorable Walking Dead episodes, that she realizes with horror that the barbecue sizzling nearby and the tools being sharpened are for her.

She escapes, but not intact, and five months later is living in a community known as Comfort, a holding place for more damned souls (including an unstable Giovanni Ribisi). The place is lorded over by none other than Keanu Reeves, playing an oily prophet who dispenses LSD to the faithful instead of communion, and spouts vague messages about chasing “the dream”.

There are long stretches without dialogue: we don’t even learn the woman’s name until 40 minutes in: Arlen.

Arlen is dead-set on revenge against the Bridge people and circumstances make her a ward of sorts to a young child (Jayda Fink), a girl who is also desperately pursued by her father (Game of Thrones’ Jason Momoa). He is one of the cannibals and is known only by his most prominent tattoo, “Miami Man”. The paths of Arlen and Miami Man cross occasionally, with volatile results.

Despite the wide-open spaces both communities are like prisons, with no possibility of escape to someplace better. And like prison, the men and women in the Bridge pump iron to stave off boredom and insanity, while the people of Comfort do drugs and rave until they drop.

The currency in these places is what you might expect – flesh, water – and what you don’t expect: art commissions. Sadly, what is not a surprise is the way the have-nots in society, our bad batch, can’t resist creating a caste society all over again after being expelled from good, decent people. (We never learn why Arlen is considered unworthy of mainstream life, or learn much about her at all beyond her ignorance of the world and the cherry tattoo she earned at age 13.)

The film deftly channels the dystopian desert brutality of last year’s Mad Max but is less even-handed with its political metaphors. Dollars burned as campfire fuel, an American flag puzzle in pieces, and a man dressed in one of those quickie-tax Lady Liberty costumes, plus the many pseudo-ironic signs and billboards found in Comfort all result in trying too hard to drive the message home when a Trump-era statement on “undesirables,” “the wall” etcetera had already been made.

The film is definitely not for mainstream viewing, and at two hours it is certainly too long and less cohesive than Amirpour’s first film. But there’s a dark magic (particularly in the first half) that keeps us watching.