Greed. Directed and written by Michael Winterbottom. Starring Steve Coogan, Isla Fisher and David Mitchell. Rating: 5 (out of 10) In the immortal words of Gordon Gecko, “Greed is good.
Mar 6, 2020 2:45 PM By: Julie Crawford 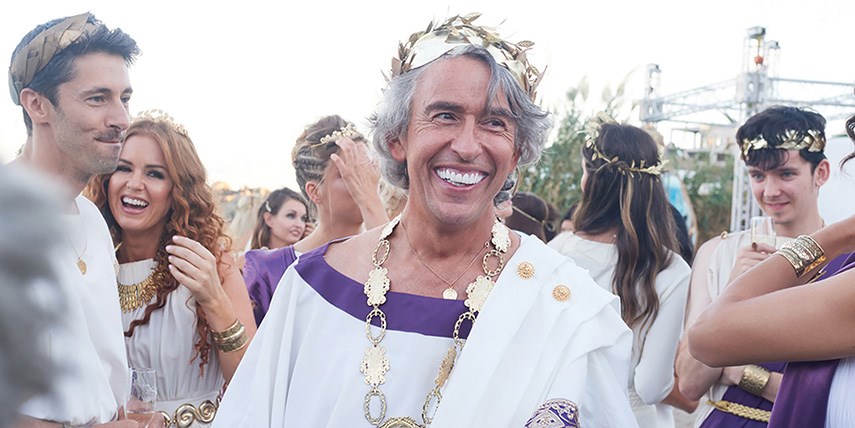 Director Michael Winterbottom and frequent collaborator Steve Coogan join forces in Greed and clearly had a billionaire (or two) in mind with their portrayal of “Greedy” McCreadie.Supplied, Amelia Troubridge, Sony Pictures Classics

In the immortal words of Gordon Gecko, “Greed is good.” But even that totem of Wall Street corruption has nothing on the louche, morally bankrupt Sir Richard McCreadie, billionaire huckster of the low-rent fashion world.

Director Michael Winterbottom and frequent collaborator Steve Coogan clearly had a billionaire (or two) in mind with their portrayal of “Greedy” McCreadie: he’s got Richard Branson’s lion’s mane of hair and the reported ethics of controversial fashion billionaire Philip Green. But the message Winterbottom hammers home is accompanied by equally urgent preaching about the plight of Syrian migrants: more than one human rights issue per film and our mind begins to wander and feel guilty about the fact that the chocolate in our theatre munchies isn’t sustainably sourced.

After a public inquiry into his umpteenth declaration of bankruptcy sullies his reputation (and fragile ego), McCreadie decides that the antidote is – what else – a garish display of wealth and excess: a party in Greece to celebrate his 60th birthday. Fittingly for a tyrant, McCreadie’s favourite movie is Gladiator, so a replica colosseum is constructed, togas are made mandatory, and there’s even a real lion thrown in for good measure.

There has been a year’s worth of preparation but nothing goes according to plan leading up to the party, around which the film’s narrative revolves. The colosseum is nowhere near ready and high-profile guests keep cancelling, forcing party planners to hire lookalikes to fill in the gaps (leading to a very funny bit involving George Michael). On top of everything, there are Syrian refugees camped on the public beach, spoiling the view for everyone.

McCreadie’s cash-loving ex (Isla Fisher) enters the fray as do several of his kids, including the withdrawn Finn (Asa Butterfield) and daughter Lily (Sophie Cookson), with a reality film crew in tow. Lily sees nothing wrong with handing out food to homeless migrant children for the benefit of the cameras, then taking it back from them when the crew needs a retake. Unforgiving characters all.

Observing and recording all is McCreadie’s official biographer (Brit comedian David Mitchell). It’s by way of Nick’s interviews and footage that we learn about the fashion mogul’s ignominious rise to fame, from his private school expulsion to bare-knuckles negotiations with Sri Lankan sweatshops. Nick forms a friendship of sorts with hotel employee Amanda (Dinita Gohil), a British ex-pat who still has family working in one of McCreadie’s garment factories; she has a crisis of conscience over working for the billionaire who puts crumbs, not bread, on her family’s table.

There are cameos galore: James Blunt has a moment, as does Stephen Fry; Keira Knightly, Chris Martin and a few British celebs send McCreadie birthday greetings.

Coogan is great as the self-aggrandizing McCreadie, who hurls abuse at his employees with language as dazzling as those too-white teeth of his. But most tycoons and tyrants have an Achilles heel, a soft spot that explains their villainy: a neglectful mother, an abusive father, a childhood spent in poverty. McCreadie has no such weakness, only an insatiable appetite for profit.

By the time our perma-tanned villain tricks the refugees into working his party for free (including one played by Kareem Alkabbani, a former refugee who came to Greece in 2016), we’ve more or less had enough of being manipulated.

But wait! End titles further educate us on the gender gap, the appalling average wages in developing countries, the statistics on migrants to Europe, and the fact that the 26 richest people in the world have as much money as the poorest 3.8 billion.

We knew from the title that we’d be confronting one of the deadly sins; we just didn’t know we’d still be doing penance as the credits rolled.