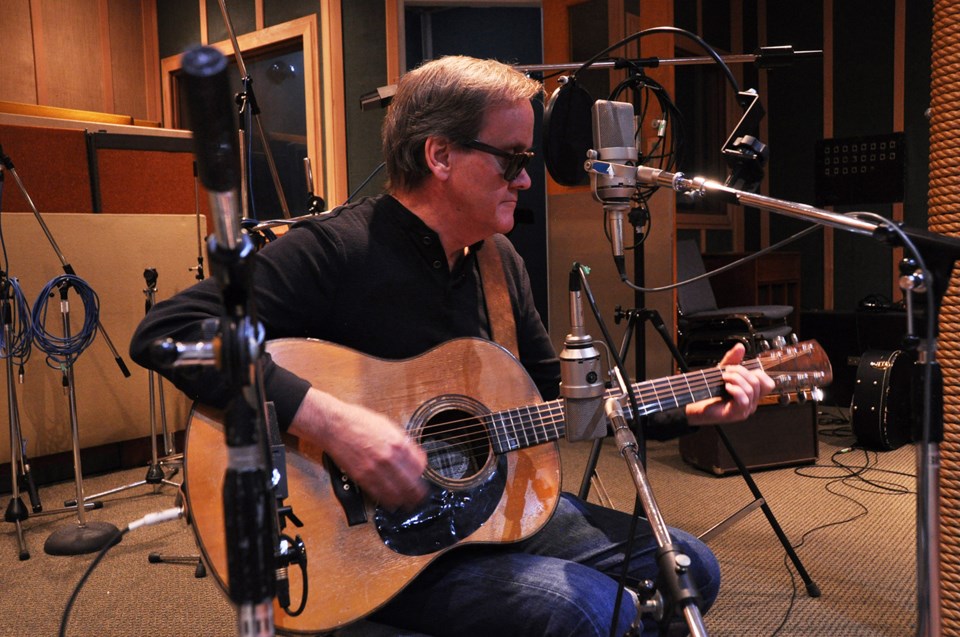 North Vancouver musician Roy Forbes recording a track for his new album, Edge of Blue, in the studio.Supplied, Riley Forbes

Attempting to demonstrate the difference between playing with a full band versus playing solo, the singer-songwriter describes being on stage all by his lonesome as a kind of tightrope act, a high wire performance that truly makes him come alive – despite the dangers of being up there without the support of other musicians.

‘When you’re by yourself, you can go anywhere – and I do,” says Forbes.

Across 10 shimmering original tunes on his new album, Edge of Blue, set to be released next week, Forbes has opted for a full-band affair, but as usual it’ll just be him and his Gurian guitar up there for the concert next Friday in celebration of the album’s official release.

Although he continues to tout the joys of walking the live performance high wire, there was a period during the last five years where Forbes’s artistic vision was tested by a lack of sight.

Afflicted with poor vision in general for most of his life, the veteran B.C. songwriter was rearranging boxes at home in 2015 when a heavy one slipped and hit him in the eye. Following multiple surgery, his eyesight couldn’t be saved, leaving him essentially legally blind.

Adjusting to his new reality during the past five years came with a host of challenges, but it was in his current situation where Forbes starting putting together a new batch of songs.

“You just do it. Somebody said, ‘What’s your philosophy of life right now?’ and I said, ‘Start from now,’” says Forbes.

Across an almost 50-year musical career, Forbes has never been one to rush release an album. The songs come when they come, he says, adding that a musician needs to know, really know, when they’ve got something before putting it out. And sometimes you just know.

“With Edge of Blue, I starting writing for that in the summer of 2016. I’d had my accident and was just adjusting to my new life as an unsighted guy. I started writing around that time and I just kept chipping away. Some of the songs came quickly,” says Forbes.

Perhaps best known for his high, soulful vocal style and acoustic blues mastery, Forbes was born and got his start in music in his hometown of Dawson Creek, B.C. He describes his early forays in music as typical for many teenagers: “Get a guitar at 14, the easy play-a-guitar-in-five minutes book, learning the chords …”

And once he learned the chords for “I Fought the Law,” he was “off and writing songs.”

He moved to Vancouver in 1971 and performed under the childhood nickname “Bim” for a time. British Invasion acts like John Mayall & the Bluesbreakers and the early Rolling Stones introduced him to the blues, at which point he set off on his own and discovered Muddy Waters and Robert Johnson for himself.

At 18 years old, Forbes landed a gig opening for Rita Coolidge at Queen Elizabeth Theatre, and his trajectory was set. “Suddenly here I am in front of this big audience and I killed it. It was my night,” he says.

As Forbes gears up to celebrate the release of Edge of Blue, he reflects on his love of music in general. For years he’s hosted Roy’s Record Room on CKUA. Culling from his large collection of vinyl LPs, 78s and shellac, he’s spun tunes on the show every week, but had to have his daughter help him significantly in the last many years following his loss of sight.

“As of last summer, I’ve taken it over again. I’m editing digital audio again, which is a big deal,” he says.

Clearly, he still enjoys walking that high wire. As he sings in the opening track of his new album:  “You’ve got to find the joy in your heart and don’t let go.”