Maggie Betts' film set in the early 1960s as the Vatican made sweeping changes to Catholic doctrine
Nov 10, 2017 8:18 AM By: Julie Crawford 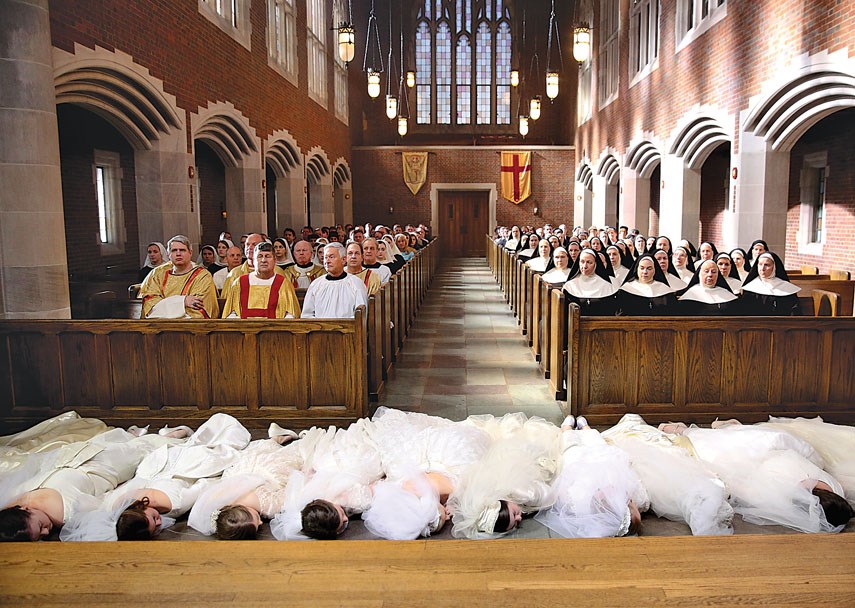 Novitiate. Written and directed by Maggie Betts. Starring Margaret Qualley and Melissa Leo. Rating: 7 (out of 10)

Two nuns at opposing ends of their faith journey grapple with the challenges of cloistered life in the female-centred film Novitiate, a film that examines belief and doubt while managing to skirt some of the stereotypes that inevitably plague stories about religious life.

The film is set in the early 1960s, just as the Second Vatican Council under Pope John XXIII is making sweeping changes to Catholic doctrine. For Rev. Mother Marie St. Clair (Melissa Leo), who hasn’t set foot outside the gates of her (fictional) Tennessee convent for 40 years, the reforms are far from liberating, a threat to her whole existence as a nun. She files the bishop’s directives in her desk drawer, hoping change won’t find its way to the Sisters of the Blessed Rose.

Young Cathleen is an unlikely candidate for a nunnery; she isn’t even a Catholic. But her interest is piqued during a rare visit to church with her mom (Julianne Nicholson) and takes root after a few years spent on scholarship at Catholic boarding school.

Cathleen enters the convent at 17, and the novitiate – the intense, year-and-a-half training leading up to final vows – at age 18. There is a gaggle of other enthusiastic young postulants, all of whom hope to join the order for a variety of reasons: many join because their family expects to give at least one child to God; one girl joins because she hopes to be like Audrey Hepburn in A Nun’s Story (she obviously never saw the ending).

“What they don’t understand is…we were women in love,” Cathleen says in a voiceover.

It’s no surprise that Cathleen is in search of both a mother and a father figure, thanks to her own deadbeat dad and promiscuous mom. In cloistered life she finds structure, community and a deep love that is absent from her early home life.

She meets inspiring women who advance her sense of purpose, including Sr. Margaret, who explains why she rejected her fiancé – “all nuns are brides of Christ… I doubt any other relationship would’ve been as fulfilling” – and Sr. Mary Grace (Diana Agron, Glee), a kindly young teacher to the new nuns who is secretly having struggles of her own.

“God is work, hard work,” Reverend Mother warns the new girls, one of whom is sent home after less than five minutes. Reverend Mother is not shy about her own God complex: “my voice will serve as a stand-in for His,” she tells the postulants, who submit to extreme forms of self-punishment and an emotionally punishing group confessional session known as the Chapter of Faults.

The nuns are not permitted to speak for much of the day and evening, and only minimally during sanctioned times. Then there’s the “custody of the eyes”, a discipline of avoiding eye contact by looking downward in order to avoid that which might distract from godly thoughts. And there’s a strict no-touch policy, of course.

But these are just girls, as a scene of the group engaging in a snowball fight reminds us.

Cathleen flays herself on occasion (in violation of the brand-new Vatican II rules, gathering dust in Mother’s desk drawer) and has taken to fasting as punishment for her perceived failures. When her mother comes to visit, she doesn’t recognize her.

When Cathleen does seek solace in something other than the divine, it is with none of the male-conceived fantasy schlock that we’ve seen in previous nunnery films: writer-director Maggie Betts, in her first feature, takes care to recognize that Cathleen is so starved for human contact by that point that any warm body would do.

Vatican II offered welcome changes: full religious tolerance and changes to the mass to better include the congregation. It gave greater freedom to nuns but it also stripped them of some of their importance: some 90,000 nuns renounced their vocations after Vatican II. Leo’s performance is stellar, but no more so in a heartbreaking scene when she finally reads the details of the Vatican council to the sisters, young and old, some of whom had spent a lifetime in service to God.

People of faith might be disappointed in the film’s ending but overall, and despite the Catholic church being absent in the credits, Betts has crafted a respectful examination of faith, devotion and doubt during a turbulent period in one girl’s life and one church’s history.