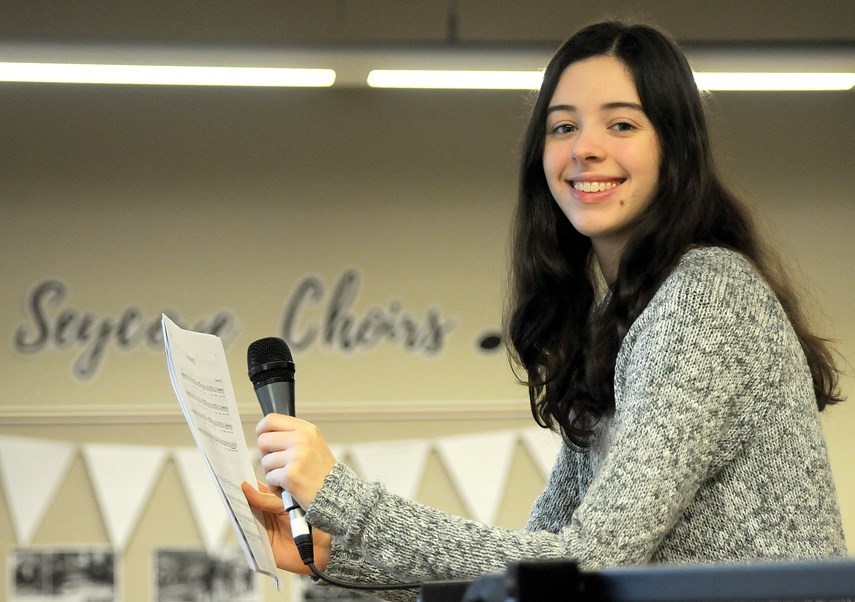 Seycove Secondary graduate Reese Findler, pictured here in 2017, organizes the annual Perform For Pride benefit.Mike Wakefield, North Shore News files
The venue may have moved online, but the fight for social change is still going ahead during the upcoming Perform For Pride event.

North Vancouver resident and university student Reese Findler will carry on the fourth-annual iteration of her festival on Jan. 9, this year in support of Out On Screen.

For the past three years in early January, Findler has hosted her benefit at Deep Cove Shaw Theatre in support of the Lower Mainland’s LGBTQ+ community.

After her own studies at Simon Fraser University moved online this fall due to the pandemic, Findler figured she’d probably have to do the same with her own festival which is near and dear to her.

“It’s been quite a large adjustment,” says Findler. “It’s also been for me a time to recognize the privilege I have to stay at home and be safe and access education online.”

Likewise, she’s hoping the community at large will access her online benefit cabaret featuring local youth talent when it becomes available to stream in January.

Performers – who’ll be showcasing everything from musical theatre scenes, belting pop songs and charting new sonic courses with original tunes – have sent in pre-recorded segments to Findler, who is currently busy editing and compiling the show into one tight 90-minute package that viewers will be able to enjoy.

“There are dancers, there are singers, there are a couple interviews sprinkled in,” notes Findler, who highlights youth actor Jaime MacLean who is fresh off portraying Matilda in the national staged musical and who is returning to Perform For Pride to sing a few numbers. “There’s quite a wide variety of performances and skills and talents.”

Findler was the co-president of Seycove Secondary’s Gender and Sexuality Alliance when she attended the high school, and has since carried on the work she started with that alliance in her annual fundraiser.

Past events have raised money for Rainbow Refugee and RainCity Housing. Funds from this year’s benefit are earmarked to support Out On Screen, an arts organization that aims to illuminate, celebrate and advance queer lives through film, education and dialogue.

The organization is responsible for putting on the Vancouver Queer Film Festival ever year and runs the Out In Schools education program that uses film and video to engage students on issues of homophobia, transphobia and bullying, according to Findler.

“I think in times like these, when the arts are definitely suffering, it’s important to support it – and it’s so important for queer performers and allies,” she says.

While Findler was saddened that COVID-19 restrictions meant she wouldn’t be able to host this year’s benefit in a physical space, she’s hoping the online video performance will be able to bring a little bit of the magic of the stage to the comfort of one’s home while supporting a good cause.

The fourth annual online Perform for Pride will premiere on YouTube on the evening of Jan. 9. Tickets cost $15, with proceeds earmarked to support Out On Screen. Patrons will be able to access the video after the ninth as long as they have bought tickets. Click here for tickets or more information.