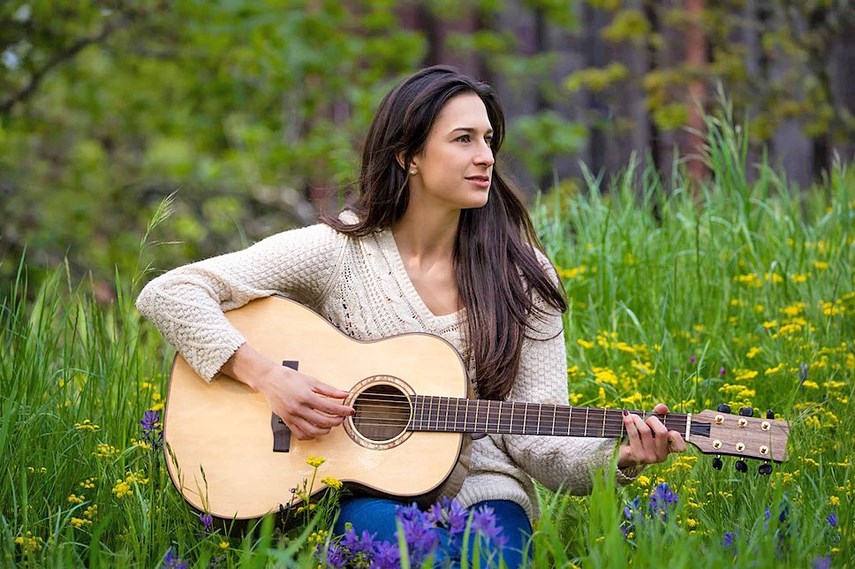 Musician and luthier Jess Perkins was no stranger to bringing life and sound to beautiful steel-string acoustics. But having to contend with death was something else.

Perkins, who lives in Victoria and was born and raised in North Vancouver, is set to release her first full-length album later this week.

The album is tuneful and honest and raw – think Alanis proclaiming what you oughta know or Carol singing about the earth moving under her feet – and, perhaps unsurprisingly, it was forged in tragedy.

Two of the album’s producers, one of whom was Perkins’ uncle, passed away in the process of making it.

In 2018, Perkins had spent the summer recording the bulk of an 11-song album called Living Room with the help of her musical muse and guitar-maker uncle Ken McBride along with his friend Roy Code, a producer with a home studio.

Code passed away suddenly in 2019 and Perkins’ uncle passed away earlier this year, before finishing touches could be applied to the album.

“It was crazy that that happened,” says Perkins. “They were the two cornerstones of me getting my dream which was to come out with this album.”

The focus of those songs has since shifted, says Perkins, who harnessed the pain of those losses into putting the finishing touches on her debut LP.

The record pays homage to the solo female artists who have inspired Perkins’ career, musicians like Sheryl Crow or Stevie Nicks who lay it all on the line to tell their stories through song.

Living Room – a title which takes on new meaning following the death of her collaborators – was intended to be a snapshot of Perkins’ life at the time when she wrote it, she explains, a musical journey that can be listened to from beginning to end.

“I was guitar building, travelling a lot, there was a really bad breakup in there, there was a lot of celebratory things in there. Me putting it into song helped me,” she says.

Before she was laying down track after track of her life, Perkins was discovering the acoustic guitar, both as a player and a builder.

She started tinkering on the guitar at 12, using strumming as a medium for conveying her everyday life as a young person.

“I started singing too and really loved it. It was really an outlet for me,” she says.

After she graduated university, and buoyed by the guitar prowess of her inspirational uncle, Perkins lived abroad for a year.

When she came home, she promptly enrolled in a luthier program to learn how to build her own acoustic guitars. After that, she went to Quebec to study luthiery even further under the guidance of famous guitar-maker Sergei de Jonge.

“Music’s always been in my life,” she says. “I’ve always been a guitar player and a singer-songwriter. Having that extra element when I’m song-writing – just that I built that guitar – it was the perfect match for me.”

And while her luthiery – the fact that when she performs live or records in the studio she uses her own guitars – adds a certain organic quality to her sound, Perkins is most inspired by what’s happening around her.

The songs on Living Room took on a new sombre quality after the passing of McBride and Code, she admits.

“That’s the beauty of songs. Sure, I write it for one reason – but how someone listens to it or analyzes it can tell a million different stories,” she says. “It has multiple meanings to me now.”