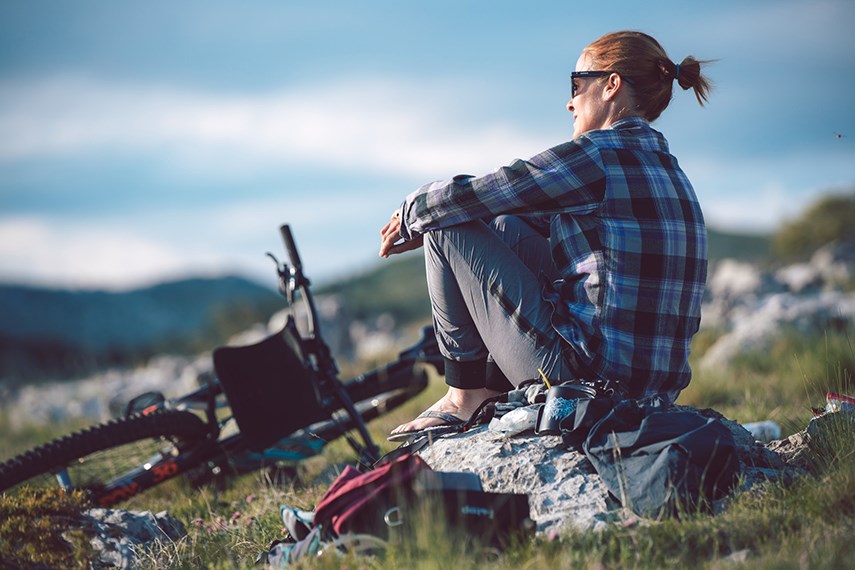 They were strangers, but their action and inaction would inadvertently spur travel, adventure and a lasting friendship. Just not with each other.

A sterling athlete at the University of Colorado, Leslie Kehmeier got interested in mountain biking for reasons that had nothing to do with mountains or biking.

“Honestly, there was a boy I liked on the soccer team and he was riding bikes. So I got a bike,” she explains.

It turned out to be the beginning of a happy, long-term relationship with mountain biking.

Riding bluffs and hills was something new and different that she could do independently, she recalls. Kehmeier forgot the boy and kept the bike.

“I married a different boy,” she says.

Approximately 147 hours northwest of Colorado Springs (by bicycle), Elladee Brown was in Pemberton, finishing high school amid the emerging mountain biking scene of the late 1980s.

“Whistler was just starting to take off,” she recalls.

Having spent much of her youth in Nakusp atop motorbikes and BMXs, Brown instantly gravitated to the burgeoning sport. And luckily for Brown, her speed-averse mother had a mountain bike she didn’t ride.

Brown and Kehmeier eventually met at a competition in Oregon.

“I was racing it and Leslie was the photographer,” Brown recalls.

And as Brown prepared to ride, and sometimes push, through the cliffs and crags of Nepal, she reached out to see if Kehmeier would be interested. There was little suspense.

“I think within about 1.5 seconds Leslie committed to that trip,” she laughs.

They could both ride, write and take photographs.

After returning from the Annapurna Circuit, the duo soon formulated the next trip: three weeks along the Adriatic Crest Route. They would start in the southwest region of Slovenia and cycle down to Trogir, Croatia – a legendary city just off the mainland on the lip of the Adriatic Sea.

Dating back to the time between the death of Alexander the Great and the rise of the Roman Empire, Trogir serves as a chronicle for more than 2,000 years of European history.

Getting there meant covering around 25 miles a day while cutting through forests, monastery trails, hiking trails and old footpaths.

Besides ancient history, the area carries traces of recent bloodshed, Brown notes, describing their ride through a 15-kilometre zone where explosives are thought to be buried.

“It’s advised that you don’t even walk off the side to pee,” Brown says.

Mostly, the trip was an exploration, she explains.

“You end up in regions that aren’t even really on maps, per se,” Brown says. “It’s just a little more wild.”

But even in remote places where finding food and water was a challenge, there were always people who assured the duo they’d be safe if things went sideways.

“Because you’re on a bike and you don’t have a windshield around you and you’re not isolated . . . you really just come face to face with people,” Brown says.

The people they came face to face with weren’t the most outgoing, but Kehmeier found them both helpful and funny.

She recalls one night at a mountain hut. Croatians cooked for the mountain bikers and filled their cups with rakia fruit brandy. Despite a language barrier, they had a great evening, Kehmeier says.

“Somehow we just carried on for hours into the night as if we’d known each other forever,” she says.

When they hit Centennial Theatre this Saturday, they’ll talk about the kindness of the people and the ruggedness of the land. But the purpose of the talk isn’t to impress. It’s to inspire.

“It’s more about getting people stoked to go and do something like this on their own,” Kehmeier says.

“It’s a very accessible trip for a very wide range of people,” Brown agrees, before adding: “I don’t think we look particularly extreme.”

Asked if they’re planning another adventure, they both laugh.