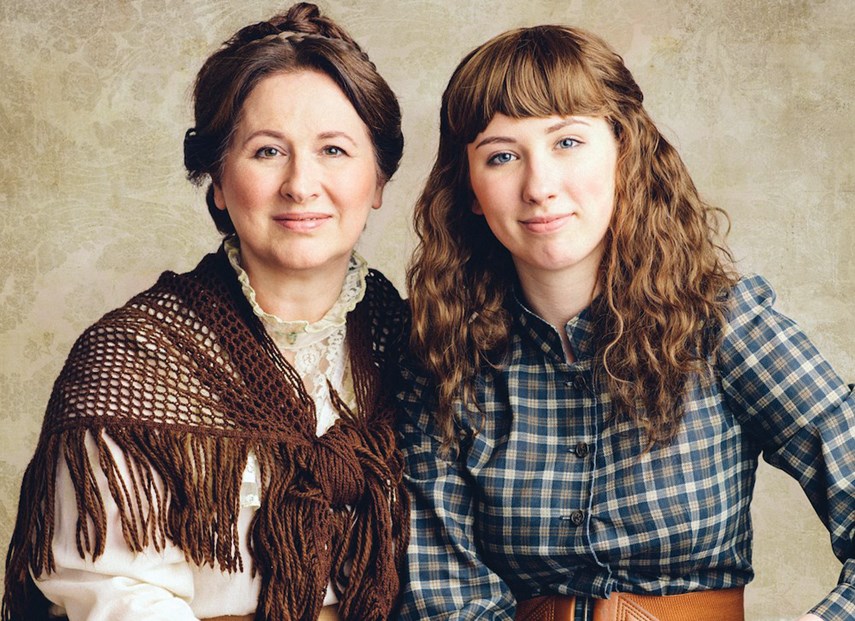 Michelle and Monique Creber co-star in Little Women, a musical adaptation of Louisa May Alcott’s book. Set in 1860s New England, the story follows four sisters on their journey from childhood to maturity during the American Civil War.

Michelle, 18, describes her character Jo, who is based on the writer herself, as a ferocious young woman who is ahead of her time. To be able to accurately portray her character, Michelle reread the book during the course of the rehearsals.

“I really want to stay true to how Louisa describes herself,” she says. “This is a show that’s so important to portray correctly, because it was real.”

Michelle has been working as a professional actress since she was six years old, but learning the craft began well before that. Her mother Monique was an acting and music teacher and resumed her classes when Michelle was six weeks old. Monique says she taught from home and would have Michelle’s stroller parked nearby.

“She started watching those lessons from a very early age, and then when she was three I started teaching her piano,” Monique says.

Now Michelle does everything from singing, dancing and acting to playing musing, writing songs and performing, and said although she loves it all, it can be challenging to prioritize one thing or another.

“I just have huge list of things that I want to do and I love doing and sometimes I don’t know what to focus on,” Michelle says. “But I think the core of me is probably music. I’m currently writing my own original album right now.”

For the past year, she had been focusing on musical theatre and next year, she said, she will be working on getting her album out.

Both mother and daughter say working together and character dynamics of the play were very straightforward because they already have a close connection.

“Having your own mother playing your mother is definitely easier than having some stranger play your mother, who you have to get familiar with during the short rehearsal process,” Michelle says.

The rehearsal period was short and energetic, beginning only at the end of November, but that was not a great challenge for the professional cast.

“If you have rehearsals only two or three times a week, chances of you forgetting things before the next time comes are much greater than if you are going back every day,” Monique says.

Actors take different approaches to get into character. During one of her previous roles, Michelle says she was just pretending because the character was the opposite of her own personality, but with this one, there is a lot more of herself.

“I’m not a method actor myself. It just sort of comes naturally to me, that ability to switch into character. I like to stay present in the scene, I also like to bring my honesty into it. “It’s also quite easy with this show, because if I lived in the 1800s, I would be just like Jo.”