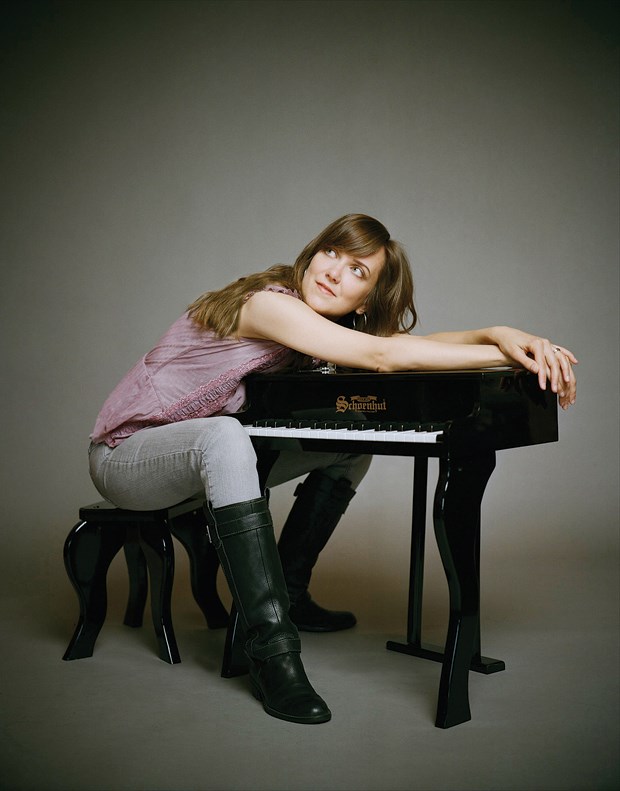 Hilary Grist is looking forward to sitting behind the Kay Meek Centre’s Steinway when she performs there Dec. 6 with her band. Scan with Layar to view a video of her new single “Waltzing Matilda.”Supplied

Singer-songwriter Hilary Grist takes the concept of living an artistic life to a whole new level.

Similarly passionate and proficient in the visual arts, the Vancouver-based performer recently transformed her apartment into both a detective's office and mad scientist laboratory all in the name of her craft. Grist used her Kitsilano apartment to house the two different sets as part of the filming process for the new video for the first single, "Waltzing Matilda" off her forthcoming LP. The video, drawing upon the 1950s detective film noir genre with a comic book/superhuman twist, features a quirky cast of characters, including an invisible man, a femme fatale, a torch singer, mobsters and a mad scientist.

The sets were up for about a month, but lucky for Grist, she had the blessing of her similarly creative-minded husband Mike Southworth, her partner on the project. The couple constantly collaborate as Southworth is a musician in his own right, and plays drums and a multitude of other instruments on her albums. He runs Creativ Recording Studios in North Vancouver where Grist does her recording, and works at Collide Entertainment as a producer, engineer and music video director.

"We end up doing a lot of our visual-type projects in our apartment so it's really hilarious," says Grist, who formerly lived in North Vancouver while studying in the jazz studies program at Capilano University.

"That was the third time that we've done that where it's just nutty and we move everything and it's just living right in everything," she adds.

"It's really hilarious, it just sort of pokes fun at the genre," says Grist, adding their addiction to Mad Men offered further inspiration.

North Vancouver native Byron Kopman, known for his work on Supernatural, served as director of photography on the project. "He's got this really nice cool dark style and we just really wanted to collaborate with him," says Grist.

To bring their invisible detective to life, they combined one scene of green screen work with "old school" special effects, using a thrift store dummy as a sort of puppet, hanging his hat from the ceiling.

With "Waltzing Matilda" released last month, made possible by a MuchFact music video grant, Grist and Southworth's apartment has returned to normal, that is, "until next time," she laughs, reached Tuesday.

With two other major projects in the works, set for release in 2014, "next time" will no doubt come sooner rather than later.

One project she and Southworth have just wrapped is a book of photographs and artwork that will be packaged with an 11-song concept album of whimsical, atmospheric lullabies, called Tomorrow Is A Chance To Start Over.

"It's a kid's story basically but it¹s kind of dark and they go off sailing into the night and they have this adventure. ... The songs intertwine with the story and are thematically linked to the story but not completely literally," she says.

The other project Grist has been working on simultaneously is her new LP, tentatively titled Come and Go. A follow to 2010's Imaginings, which saw her experiment with a number of musical genres. She views Come and Go as a more focused and cohesive work.

"I really wanted to do something that had a little bit more energy and a little more drums and just reflect more what I've been doing live," she says, of the pending indie pop/soft rock offering. That said, "It's still mellow, it's still me."

Grist plans to release the video for the second single, "The Trade," off her new album in January 2014.

Grist also anticipates doing some touring next year in support of her two projects.

Those looking to see Grist live sooner are in luck as she is set to play West Vancouver's Kay Meek Centre Studio Theatre Friday Dec. 6. Joined by a backing band, including Southworth on drums, she plans to play songs from throughout her catalogue as well as her 2012 holiday album It's Officially Winter Now, offering up some rearrangements of Christmas classics.

"Just a little taste because it's getting closer to Christmas so people are in the mood for that," she says.

The performance will mark Grist's Kay Meek Centre debut, her excitement heightened by the fact that she'll have an opportunity to play the venue's reputable Steinway, as the piano is her instrument of choice.